Some two decades after Star Wars upended the film industry and setting in place the summer blockbuster, Toy Story produced a similar cascading effect. American animation changed. The suddenness jarring, the impact on pencils, pen, and paint catastrophic. In terms of animated cinema, the equivalent was to that of moving from silent to sound.

Toy Story’s appropriate story is about change. Pixar’s team had to know what they were doing and accomplishing. Unlike other dramatic changes in movie creation – say when sound films used sound just to say they used sound – Toy Story gives true dimension to its world. Yes, it’s possible to tell this fable of growing up using traditional means. Yet, it’s difficult to imagine a Toy Story without visible plastic, ceramic reflections, and the carefully rendered cloth of Sheriff Woody (Tom Hanks). The authenticity, developed at a time when Windows 95 and the Super Nintendo were still king at home, is a marvel of ingenuity and digital gusto.

… as much as Toy Story concerns Woody, Buzz, and Andy, it’s about the film industry too

Any one growing up in first world economics did what Andy (John Morris) does. Fed enough Saturday morning marketing, those toys we were attracted to before the professionals beamed their ads to our eyeballs become secondary. Peer pressure matters. At his birthday party, Andy and friends run the house with Lightyear as their guide. No one wants that goofy cowboy. There’s a sadness there, an old-timey one too. Back when movies trotted out the Lone Ranger, the space race intervened. Sci-fi took over. Out went Roy Rogers. Out went Howdy Doody. In came rocket ships. Innocence died a little, as it does for all kids as they grow. Toy Story projects that transition. Toy Story 2 took it and ran.

To its credit, Toy Story isn’t reckless. The morals concern sharing and acceptance. Things change. How we adapt comes to define us. Turns out, as much as Toy Story concerns Woody, Buzz, and Andy, it’s about the film industry too. In terms of box office, studios adapted well. For those great men and women who got Disney to this point, they became as forgotten as Roy Rogers. 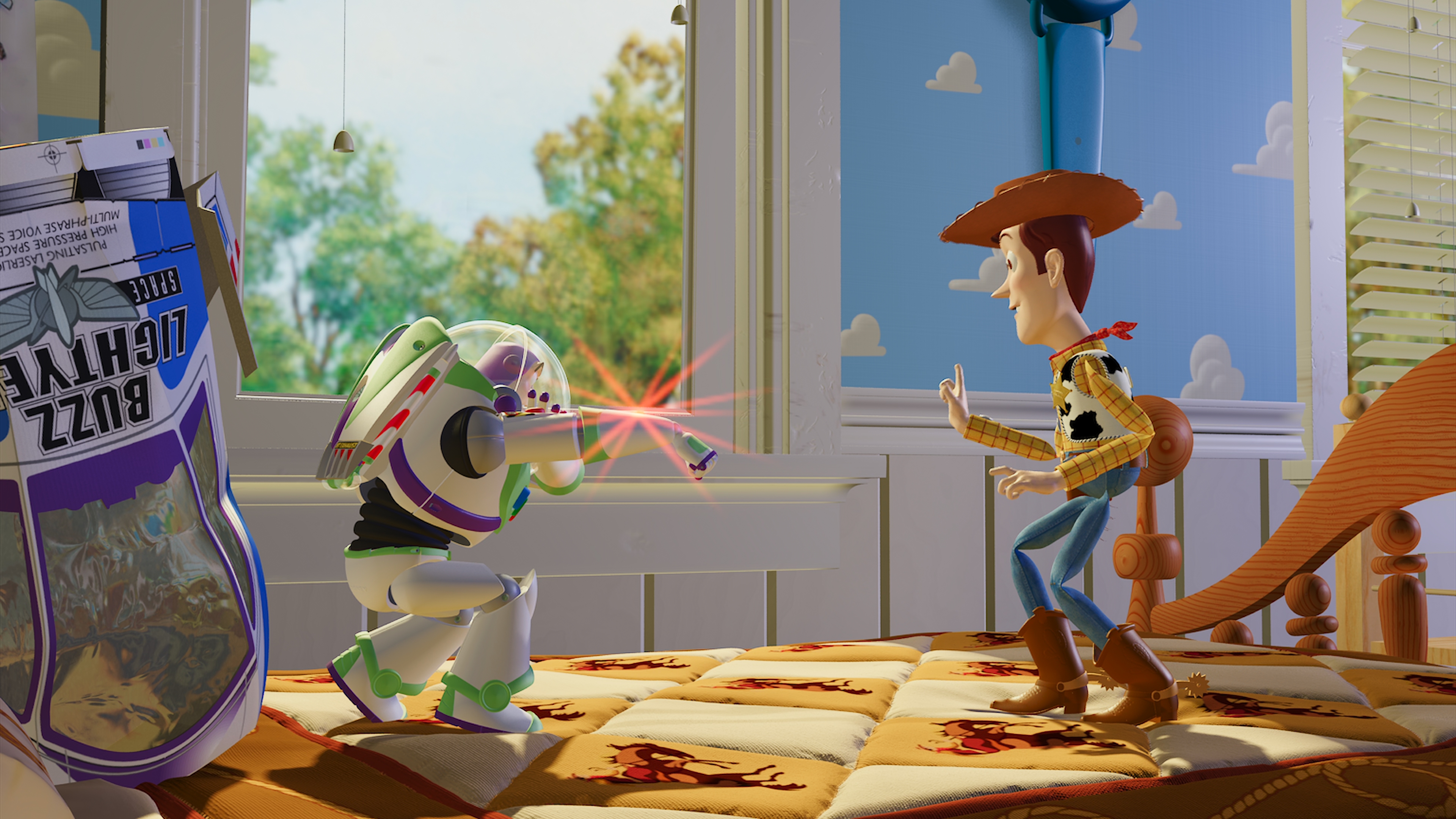 Two trains of thought will become the focal point of Toy Story in 4K. On one side, preservationists who appreciate seeing the warts and faults of this early, low resolution source. The other, chastising the viability of banding and smeary textures.

From this perspective, being able to see the technological faults energizes this movie. Unlike the pristine beauty typified by today’s CG, Toy Story’s moments of aliasing, dithering motion, and even odd noise keep a handmade quality around. It’s struggling to to keep itself alive on (now) primitive computing power, this 4K disc better at maintaining those quirks than Blu-ray.

This is quite a beautiful disc in that sense. Color leaps well ahead of previous home video incarnations. Depth and density both trounce earlier Blu-rays. Buzz’s neon, glow-in-the-dark green doesn’t hold back. In a world of toys, it’s all color and high-grade saturation. Couple that with some true HDR spectacle. Inside Sid’s room, posters shine from an apparent black light. That detail was never so obvious or rich. Black levels add ominous shadows to the same space as the piecemeal toys crawl from under the bed or benches. Pizza Planet’s litany of arcade machines and exterior signage display with natural pop.

The first go-around for Atmos is a touch lean. Disney’s now infamous low volume problem compresses range, even if cranking the dials up. A day will come when there’s an explanation for how this keeps happening with the studio’s discs. Until then, Toy Story is another victim.

It’s inarguable that Toy Story uses the traditional soundstage flawlessly. The way voices and activity finds a home in various positional channels is faultless. It helps in expanding space, where say Buzz’s voice jumps from a surround away from Woody. Scenes of a crowd whip around. Soldiers march front front to back or left to right. Kids too pan between channels as they run around. Overheads barely see use though. The best comes during Buzz’s “flying with style” action, spinning him around in the heights. A brewing storm does so from a virtual sky, convincingly high in the soundstage.

LFE accompanies action as needed, upping the soundtrack’s strength along with the various firecrackers exploding. During the birthday party, kids run and stomp on the floor with pleasing low-end support. It’s routine, if suitable.

Don’t count on anything new. Drop in the included Blu-ray for the same extras as before, minus the Toy Story 3 sneak peek. A crowded commentary begins with director John Lasseter joined by (deep breath) writer Pete Docter, art director Ralph Eggleston, technical animator Bill Reeves, and co-producers Bonnie Arnold and Ralph Guggenheim. There’s no reason the UHD doesn’t include at least this.

Buzz’s Mission is a short piece for kids on the basics of space travel. Paths to Pixar is a short but nice look at how the animators ended up at Pixar and their influences. Three studio stories are animated little snippets that tell of some funny happenings inside Pixar. Buzz Takes Manhattan looks at the Macy’s Day Parade balloon of Buzz Lightyear and how it came about. Black Friday talks about the film’s original darker path.

Basic making-of stuff is included, but with an enjoyable side the Pixar guys always bring with them. Five additional featurette sections include Design, Story, Production, Sound, and Publicity. They explain themselves, and run around another hour total. Some deleted scenes and trailers finish things up.

It’s hard not to look at Toy Story with fondness for its easy, relatable narrative, but consider the critical and subversive nature of its animation too.