To College and Beyond

For three films, Andy was in the background. He’d startle his toys, play with them on occasion, yet the goal each time is for Woody or Buzz to return themselves to Andy. Toy Story 3 is the perfect culmination. Each film is larger because that’s how sequels work, yet the toys keep getting further away too. More desperate, more isolated. Unseen, Andy slowly loses his connection to youth; that’s why the distance grows. In the first Toy Story, it was simple progress. Old toys disinterest him. For Toy Story 2, Andy accepted he didn’t need toys at camp. By Toy Story 3, college looms.

It’s less about growing up than maintaining a connection to what we have. That’s somber. Consider these toys never actually “live” in the sense of the story. They represent Andy and his changing state of mind. Woody’s struggles of abandonment reflect Andy’s loss of childhood.

… the best work of this lauded studio

Toy Story 3 ends perfectly. Finding a better trilogy finale is difficult. This one is emotional, warming, and a little manipulative. The latter isn’t negative. Toy Story 3 finishes a journey, maybe one by accident since Pixar undoubtedly did not know of Toy Story’s potential, yet it’s faultless. Toy Story didn’t spring from a 10-year outline or corporate plan. Between the three, the organic, smooth narrative flows with remarkable efficiency and awareness.

Prior to the release of Toy Story 4, this is Toy Story royalty. Pixar’s too, the best work of this lauded studio. Maybe Toy Story 3 doesn’t approach the animated high art of Ratatouille or the captivating creativity of Inside Out. Toy Story 3 keeps the universal draw around, that story everyone experiences in their lives – letting go. In this case, it’s playthings. Toy Story 3 can capably stretch its theme further. Acceptance, need, or generosity all apply, under the banner of moving forward in life.

Just on the surface, Toy Story 3 introduces more color and vibrancy. The script doesn’t suffer from the forcefulness of Toy Story 2; this is a more mature tale. It’s comically adept, even as it recycles ideas of being lost/abandoned, Woody (Tom Hanks) unwilling to quit on Andy, and Buzz Lightyear (Tim Allen) reprogrammed. Think of this: This is Andy’s last go. In the opening scene, Andy is seen recounting the opening of Toy Story, bolder now with explosions and flying pig ships. For all of Toy Story 3, he’s doing it all over while he still can. That’s how he’s dealing with growing up. Through Andy, we all will, no matter our age. 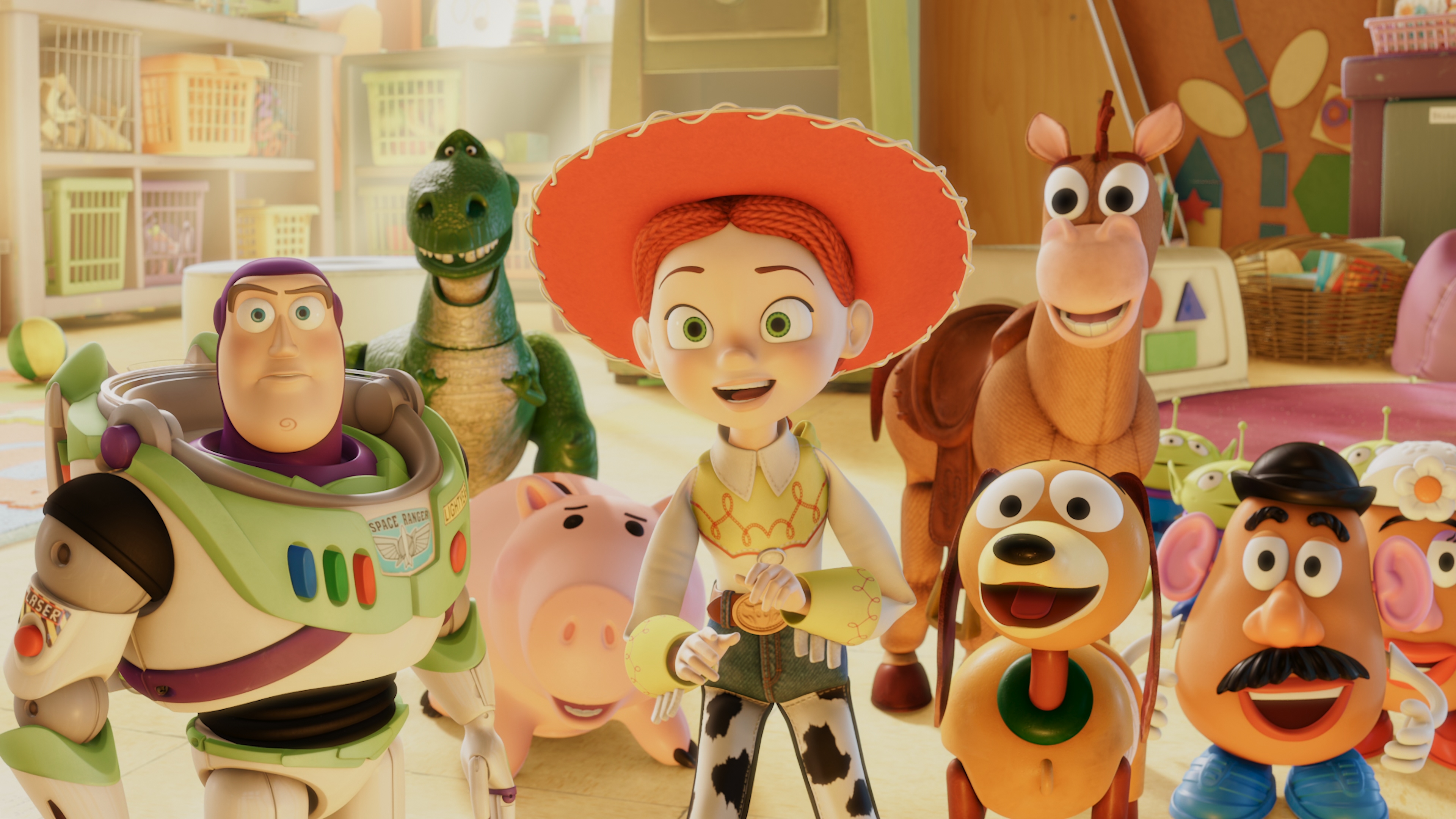 While some will question the first two Toy Story releases in 4K, that’s unlikely to be the case here. Although decade old animation – a senior citizen in this part of the industry – the HDR applied counts for a lot. With a mixture of dark scenery (especially in the finale, inside a garbage truck) and intense brightness (the daycare), range matters. Intensity brings vibrant contrast and richness to the depth, giving Toy Story a modern veneer.

Fifteen years passed between the original and Toy Story 3. Advancements in color reproduction and lighting brilliantly display here. Texture does too. Close-ups on Lotso’s plush fur or Barbie’s inlaid hairline bring new sharpness in 4K. It’s an upscale as with all CG animation, but noticing isn’t possible outside of some minor aliasing.

Saturation retains consistency. Moody scenes, like Buzz approaching the meeting of evil daycare toys, requires a dirty green. Here, it looks correct, without an unnatural brightness attributable to the Blu-ray. Shots inside the daycare splash the screen with primaries in droves. Every frame of this presentation is a delight.

Partway through, Buzz goes on the attack. He leaps around, corralling toys, hitting each speaker in the soundstage, overheads included. Inside a garbage truck, the height channels create immersion. Then they stop, because those two instances represent the whole of the ceiling channels.

It’s great otherwise, low volume and slightly pinched range aside. The first scenes feature a train running through the low-end and then an explosion of equal force. By the end, activity in the garbage compactor likewise stretches dynamics. Surrounds never miss an action, awesome in daycare mayhem with kids screeching and running, capturing the madness the toys must deal with.

The short Day and Night is up first, the usual Pixar quality upheld. Buzz Lightyear’s Mission Log tackles the International Space Station while educating the young ones. Toys! is a short six-minute look at the amount of work that went into creating the characters. The rest moves onto a second Blu-ray. That includes a commentary track, four featurettes that build an outstanding making-of, nine short additional featurettes (with the option to watch them alongside the movie) and a slew of promotional materials including foreign trailers.

This is the same as the previous stand-alone Blu-ray.

Toy Story 3 ends the trilogy with perfection, revealing the adventures of Buzz and Woody were Andy’s own as he feared growing up.

The following six screen shots serve as samples for our Patreon-exclusive set of 55 full 4K screen shots grabbed directly from the UHD: