Between Toy Story’s 1995 release and Toy Story 2 in 1999, the internet happened to the collector’s market. At once, a litany of classic items became available to a worldwide audience, primarily through eBay (and failed competitors). It’s not as if pricey vintage items didn’t exist before – they did – but in small pockets of local auction houses. That’s a limited market. The internet of things joined us all.

Toy Story 2 despises the idea. The villain here is Al (Wayne Knight) a portly, sweaty, balding middle age-something male with a squeaky voice. He steals Woody for personal gain. As it turns out, Woody’s part of a western series from the Howdy Doody era. Instant nostalgia for a generation, of which Al is willing to exploit.

It’s a smart story, a retread mostly with the toys scattered, now in reverse with Buzz Lightyear (Tim Allen) seeking Woody (Tom Hanks). The first act is too brisk, overly willing to use exposition to get things moving. That’s fine. The later exploration of what toys mean to people is an emotional motivator. Toy Story 2’s tug-and-pull is whether Woody joins the set of figures from his TV show or heads back to Andy who will inevitably discard his childhood. “Will Andy take you on his honeymoon?” asks the manipulative Pete (Kelsey Grammer).

There’s a sense of pressure in this script, already playing a nostalgia car

The answer is no, unless Andy grows up to be the most dedicated cowboy fan (Toy Story 3 answered that one). Toy Story 2 decides that bringing joy to one living their freest days matters more than sitting on a shelf helping people live through them. It’s right in that assertion, although the message didn’t work. Resellers remain a cornerstone of the vintage toy market, but Toy Story 2 isn’t uninspiring. Value cannot be counted be counted in dollars. Money makes us worse. Tough stuff for kids to realize, carefully coated with color, humor, and joy.

Competitors to Toy Story began to rise by the time of this sequel. Not many, but a few. There’s a sense of pressure in this script, already playing a nostalgia card with references to the first movie and some greater pop culture callbacks that eventually defined mainstream animation. And still, Pixar’s work isn’t less endearing. This series is insurmountable in broad, all-ages appeal. Toys connect everyone on some level. That’s why efforts to anthropomorphize Planes come across as shrill and exploitative while Toy Story gets a pass. Toy Story 2 speaks universally. 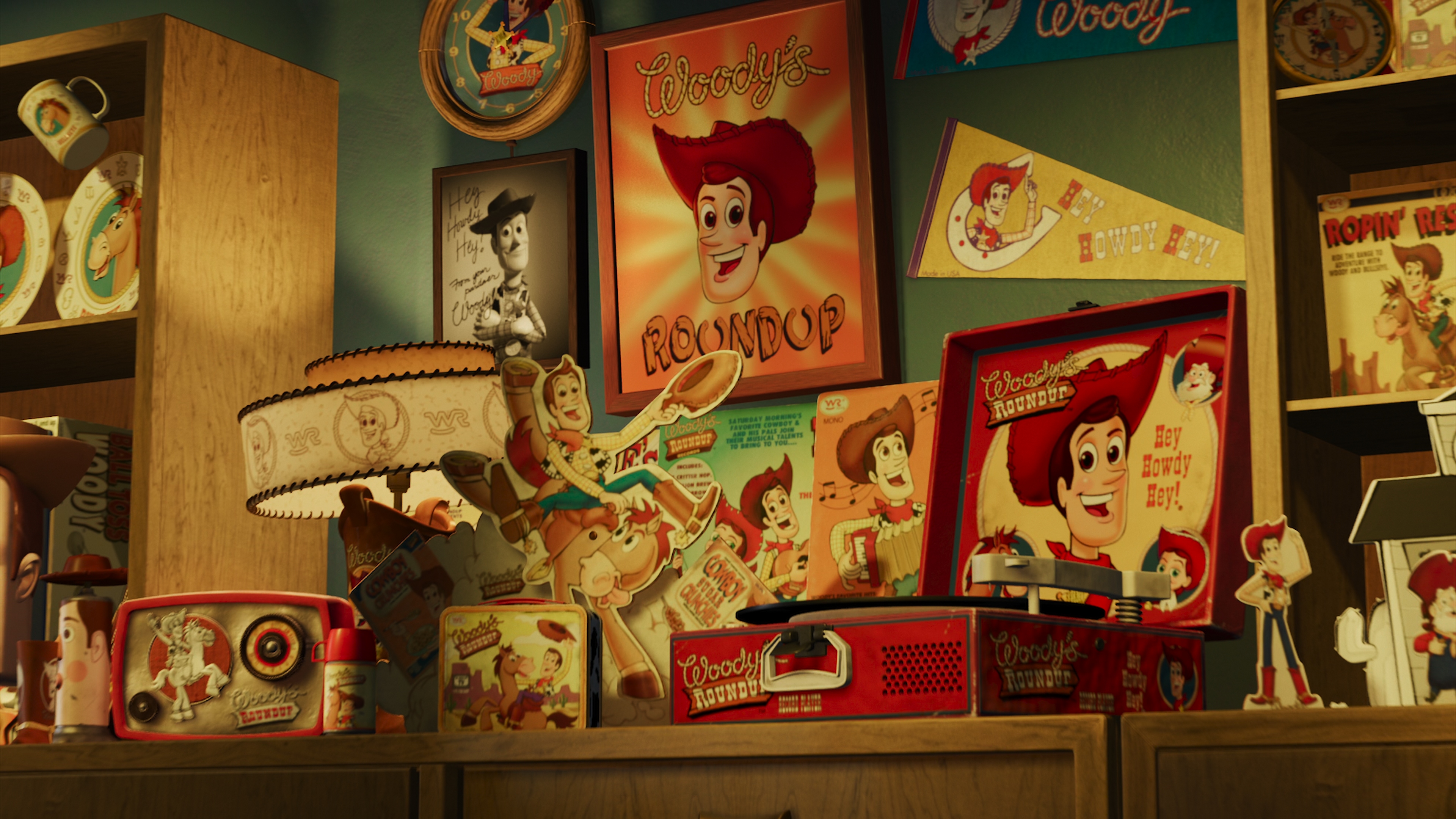 Tech advancements at the source give this sequel better textures to work from. In the 4K upscale, it’s imperfect. Aliasing and shimmering do become evident. That’s the source, not this disc. The same goes for some smeary grounds or other lesser details, part of this film to infinity… and… beyond. Sorry.

The format leap isn’t one of resolution or sharpness. Aside from a better codec and better rendering at distance, differences in comparison hardly make the upgrade worth it. However, HDR is the reason to jump. Toy Story 2 uses a darker aesthetic, set in a underlit store, a room with shades drawn, and even air ducts. Those need dominating black levels, and this UHD is the first time they feel appropriately dense. A contrast boost questions the need of why the Toy Story trilogy was converted to 3D. Looking down an elevator shaft or the landing gear of a plane creates dimension without glasses, this coming from a staunch 3D supporter.

More evidence comes in through the color. Bright, peppy primaries enhance the richest hues. HDR steps in here too, adding glow to Buzz and adding heft to Zurg’s many lights. It works in darker areas too, like when Buzz walks by fully stocked shelves of his alter-egos. The blue palette choice is exceptionally rich without a loss of mood.

Remixed for Atmos, there’s little new here. While the wide front soundstage keeps voices fluidly traveling into stereos and away from the center, plus the surrounds never miss a single sound element, it’s as if the overheads weren’t mixed at all. It’s still a fun track, if not taking advantage of the format.

LFE is a tricky one. This is Disney. Their range compression requires a few turns of the volume dial to reach optimal levels. Even then, the low-end lacks bite, a little squished in dynamics. That’s notable during the street crossing with cars panning by the toys. Once they start colliding and a concrete sewer section begins rolling, the subwoofer produces bass, just not enough to set scale.

The commentary track (on the Blu-ray only) is slimmed down from the first Toy Story to just co-directors John Lasseter and Ash Brannon, editor Lee Unkrich, and writer Andrew Stanton.

Buzz Lightyear is back to provide a look at the International Space Station for the younger set. Paths to Pixar focuses on additional staff members telling their stories of how they wound up at the studio. Three more stories come from deep inside Pixar in Studio Stories. Pixar’s Zoetrope is a far too short two-minute look at what Pixar made for Toy Story 2.

Celebrating our Friend Joe Ranft is a retrospective on the story designer (and voice of Wheezy) who sadly passed away after Cars was finished. The rest of the extras are pulled from the Ultimate Toy Box DVD edition. These include three making-of featurettes, a selection of outtakes, deleted scenes, a section on design, another on production, followed by music/sound and publicity.

Note all of this was included prior on Blu-ray. Nothing is new.