Death in the Air

The Black Cat came after the establishment of the Haye’s Code. It never feels as such. Murder is one thing, but Black Cat deals in astonishing elements for the period. Satanism, undead, mass graves, resurrection; even in consideration of Universal horror films to come, Black Cat ranks as the most sadistic.

It’s a defiant, cold, and melancholy effort. Note it’s distanced from Edgar Alan Poe’s work; his name was used for marquee value only. Desperate sadness moves this story. Released in the heart of the depression era and post-War, contemporary life feels decidedly real in an often surreal and suggestive movie.

There’s no castle here. It’s difficult to imagine stars Boris Karloff and Bela Lugosi starring in something without a lavish, draconian exterior. Instead, the Hungarian setting uses the architect of Karloff’s character to create an unnervingly modern home. On a hill, the house stands alone with straight lines. Inside, it’s barren and open. Short of ‘30s technology, with slight renovations, this is modern living.

… a prelude of Universal horror to come

Then the basement. A dungeon, housing women in glass coffins, seemingly floating in death. The contrast is stellar, using black and white as a visual separator, from the inviting, bright living areas to a Hollywood underground of brick, unwanted moisture, and unseemly crimes.

A sense of rejecting riches is evident here too. Being of the ‘30s, the movie shuns the idea of exotic honeymoons and makes financial elites into villains. David Manners notes, “I guess we need architects,” shaking his head as if the current world has greater need than new building designs. Ironic, since Manners’ character writes flimsy mystery novels. Like Black Cat, a need for escapism is celebrated.

By the climax, the phones go dead. The only car won’t start. Trapped in isolation and hatred, Karloff and Lugosi square off in a chess match, an obvious allusion to their various stand-offs and accusations. Lugosi only wants his wife back; Karloff knows what happened to her. In addition to issuing narcotic fears and infidelity themes, soon Black Cat turns into a brutish melee. The stars revert to their wartime selves, antagonist, relentless, and heartless. It’s a marvelous send-off, and a prelude of Universal horror to come. 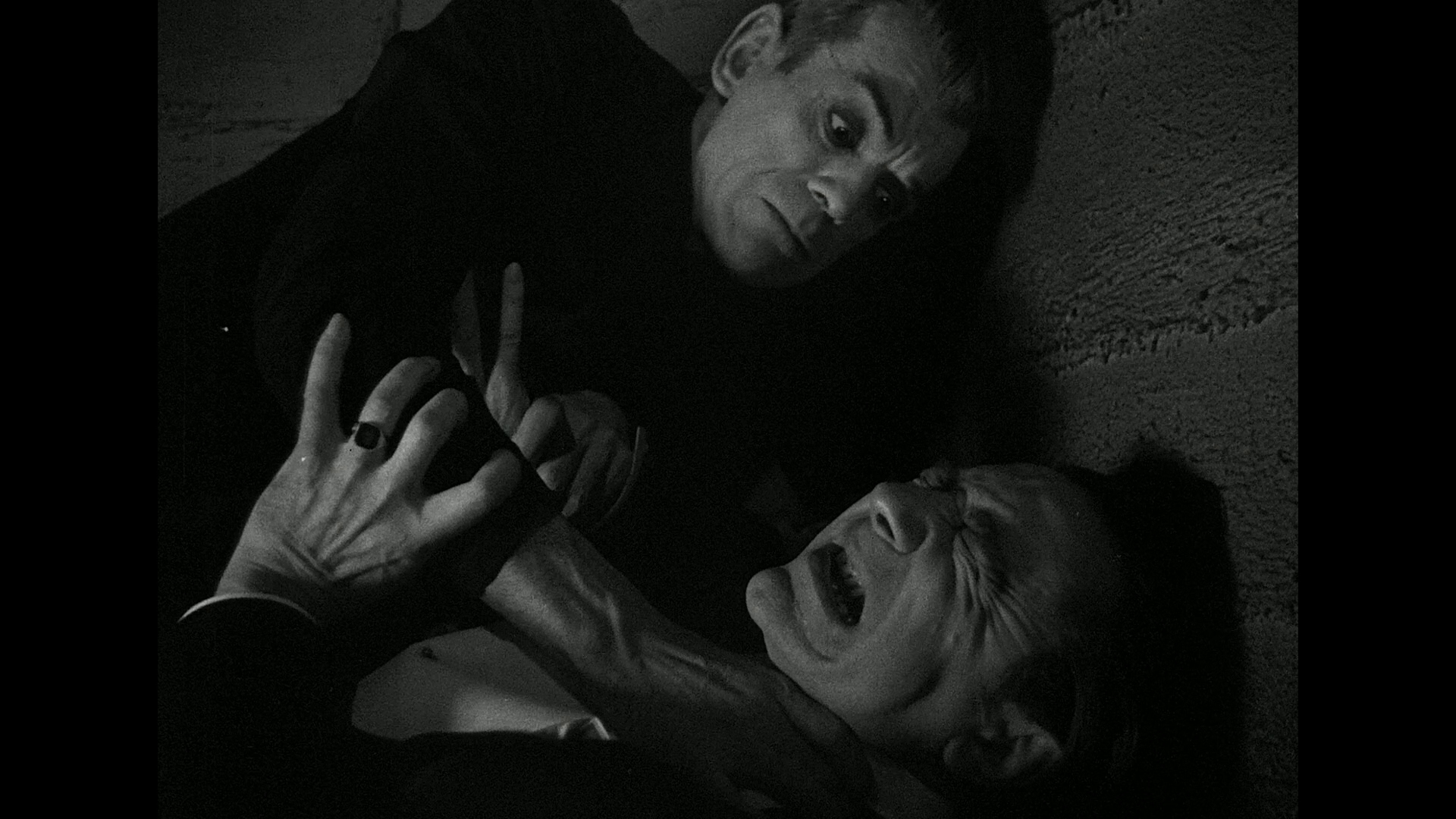 Scream Factory includes Black Cat as part of their Universal Horror Collection. Black Cat is given its own disc, and at barely an hour, there’s space to play with. Unfortunately, this is a rough, worn source. The persistence of vertical scratches – some light, some harsh – never stop. It’s as if Black Cat were run in front of a comb.

This source does not look newly mastered. A vault find, maybe, scanned and pushed onto Blu-ray without correction. To an extent, that’s fine. Natural age and grit add to an aesthetic. Resolution sags though. A few detailed shots cannot make up for the presentation’s overall puffiness. Glamor close-ups of the day glow as intended, but most of Black Cat dries out in sharpness. Compared to say, Universal’s own Monsters collection, this ranks low.

That goes for grain too, buzzy and messy while introducing banding concerns. Gray scale doesn’t impress, with low regard for black and occasional blooming in contrast, assuming there’s much contrast at all.

Coming early in the talkie era, Black Cat captures the thin, tinny output of the time. Unusually featuring a continuous score (most of the period used music as a book-end only), highs crumble, even wither from time.

Yet, like some of those video concerns, distortion and hissing sound right. Karloff plays an organ to kick off the final act, and the off-key, ugly audio fits the vibe. It sounds unkempt and dirty, suiting the visual of a rotting basement.

Two commentaries from knowledgeable authors/historians begin the most lavish edition of this ‘30s gem to date. Gregory William Mank is up first with Steve Haberman on two. Usually, it makes sense to combine speakers, but with Black Cat only an hour, Mank’s focus on Karloff lets him take the full runtime for a fascinating actor history.

A Good Game recalls Black Cat’s making. Some of the material is redundant to the commentaries, but at 23-minutes, there’s enough to chew on. A rather dryly presented look at Edgar Alan Poe movie adaptations comes close to an hour. Interesting, if a touch plodding. Some footage of a contest run by Universal features kids showing their black cats to Karloff and Lugosi. It’s less than a minute, but a nifty easter egg. Finally, some stills.

Karloff and Lugosi squared off for the first time in The Black Cat, a movie built on wartime and depression era anxieties.

The 15 unaltered images below represent the Blu-ray. For an additional 15 Black Cat screenshots, early access to all screens (plus the 20,000+ already in our library), 75+ exclusive 4K UHD reviews, and more, support us on Patreon.