Bane was born of the recession. He’s a villain looking to reshape society, shifting things away from the rich. Setting a siege in the stock exchange, he grabs an arrogant trader who says, “There’s no money you can steal!” Bane replies, “Then why are you people here?”

Dark Knight Rises seems angry with itself. Batman Begins celebrated the rich and their power to fix or mend. Now Catwoman (Anne Hathaway) notes, “The rich don’t even go broke the same as the rest of us,” placing Dark Knight Rises right in the public furor of Occupy Wall Street and their fire over golden parachutes.

Some seven years on, the country around this trilogy changed. So too did Batman. Christian Bale’ Bruce Wayne begins Dark Knight Rises as a broken man. He’s poor. That stings, probably more than his arthritis. Money can’t fix everything, so this script sets out to reconcile with Wayne’s privilege. The typical hero’s journey is used as redemption for the rich, but carefully removes wealth. Wayne ends up at the lowest point – literally – and needs to climb out through sheer will. Hokey as a metaphor, but effective when melded to two films prior as a character piece.

As for Bane, he takes over for Batman, holding Gotham hostage. Batman sought to fix Gotham through mercy; Bane will do so without any. City streets become flooded with criminals after Bane unlocks the prison doors and tears down the walls in protest of incarceration. That’s a touch extreme. He has a nuke too, because so few American blockbusters of this scale choose to avoid the advance of terrorism. The interim police chief hides in house, unwilling to face the danger. Fear wins. It always does. Dark Knight Rises portrays such in a smart, concise way.

In its efforts, Dark Knight Rises concludes this series by tying loose ends. Certainly, the film has more than enough time to do so at nearly three hours in length. A three-hour Batman movie – and a successful one. That alone deserves praise.

It’s capped by an oversized budget, used to swell the use of IMAX cameras, enlarging the scale and through visual might, the stakes too. Dark Knight Rises captures an entire city all at once in its frame. There’s an exploding bridge off to the side at one point. That’s a shot of enormity in most films. By shrinking it a tiny ball of smoke, Dark Knight Rises shows how much is happening. No one in Gotham notices the bridges in their panic.

Batman returns of course. He doesn’t succumb to the fear he felt in Batman Begins. He shrugs off the chaos set in motion via The Dark Knight. Batman steps up, duels Bane, and fades into obscurity. He gave Gotham its heart back. That’s all he ever needed to do. 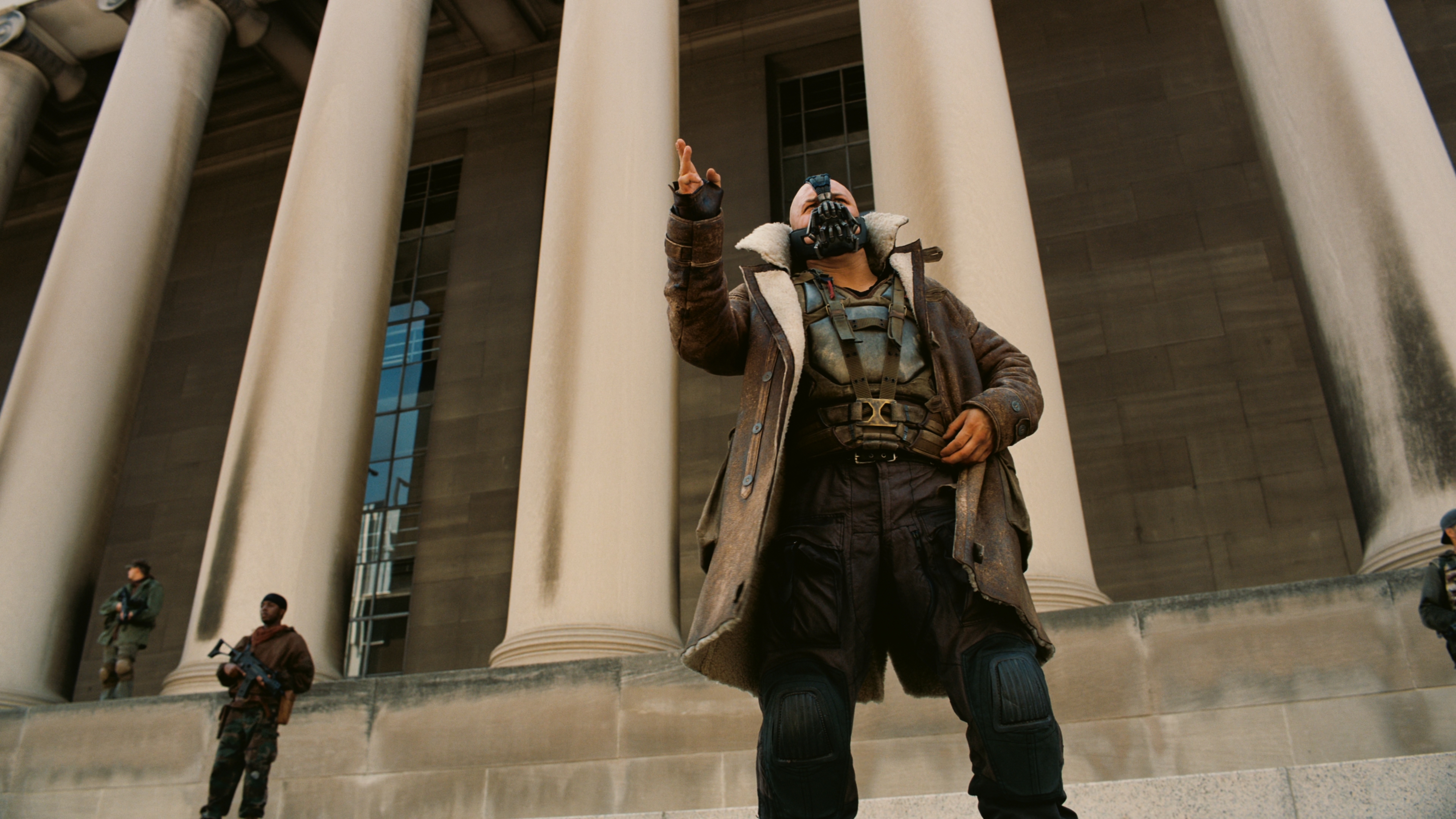 By way of extensive IMAX 70mm use, Dark Knight Rises is the best looking film of this trilogy. That high-grade film stock is marvelous, rich in texture and purest of sharpness. Resolution reaches the extreme fringe of what this format can produce. Aerials of Gotham bring out every detail of the skyscrapers and the coast line.

Now with the HDR pass, the lights dazzle as they jump from the buildings. Reflections pop, and metals look stellar. When fighting Bane in the sewer, a wet Batman suit shines with newfound intensity. Consistency isn’t as great in black levels, but the seedier look is suited to these deeper grays. And to be clear, true black is a fixture here.

Sadly, this is, like the previous two films on UHD, bogged down by the sloppy 35mm footage. Chunky grain looks unnatural, a fault of lesser mastering most likely. That’s supported by the messy sharpness, giving Dark Knight Rises little in the way of fidelity. As a whole, the image appears smeary and messy, lacking in precision, and that’s not only because it’s book-ended by the IMAX footage either.

Tweaks to the color leave some residue behind, if minimal. The dance between Bale and Hathaway is baked by orange. That’s a bit gaudy. There’s little evidence of deep color, another trend in this series on UHD. The lack of color density is too often a disappointment.

In DTS-HD, this port of the Blu-ray mix is still a masterpiece. So much happens in this mix, from wild, rioting crowds, to debris, to vehicle chases, planes panning around, and underground ambiance, to handle it all deserves praise. Dark Knight Rises uses an audio track that misses nothing. Surrounds and stereos pair as equals, transitioning between one another without a miss. A shoot-out in an alley is especially vibrant.

Massive low-end power accentuates the Bat Plane’s engines, along with the various Tumbler vehicles. The weight matches the vehicle’s imposing scale. Explosions burst free, using dynamic range to its fullest. When Batman and Bane tussle, punches earn a spot in the LFE too, nicely managed and reasonable in comparison to the rest.

An extras discs provides all of the bonuses. Three sections (Production, Character, Reflection) balloon out into twelve more. It all comes together under the banner of Ending the Knight. This is deep, honest material that avoids many of the bonus feature cliches. The only genuine gripe is the lack of a “play all” option. Heading back to the menu after a few minutes of content is a bit of waste. What is here is still worth your time though.

The Batmobile is – if you count the other sections as individual parts – the longest thing here. This cycles through the history of Batman’s most famous gadget, even allowing Joel Schumacher to get in a few words. At an hour long, it’s exhaustive and a ton of fun to boot. A wealth of trailers and collection of print campaign art will signal the end.

The longest of the series, The Dark Knight Rises spends its time well, spinning a story of wealthy redemption by way of Batman.

The following six screen shots serve as samples for our Patreon-exclusive set of 62 full 4K screen shots grabbed directly from the UHD: