Decent Men in an Indecent Time

Around Batman is 2008 America. Gotham is every big city at that time, looking over their shoulder for another terrorist. It’s a city of fear, even more so than in Batman Begins when an actual fear gas poured into city streets. This is more primal, instinctual even. An attack on a police funeral, with hundreds of civilians fleeing from an assault, encapsulates the impossible scale of panic at a time when mornings were spent brewing coffee alongside a TV showing a multi-colored terror scale.

Funny it takes the hyper-fiction of Batman (of all things) to bring forth these anxieties. Dark Knight is an encapsulation of a decade post-9/11, brought down on a singular city, that an obvious New York stand-in.

Batman is fine; Ledger’s Joker is a permanent screen sensation

In its third act, Dark Knight even invokes Bush-era surveillance debates with a technology that allows Batman to tap into everyone’s cell phone. Dark Knight never makes the case as to whether this is right or not. It ends with the system self-destructing, yet the hundreds-wide screens picking up those signals did lead to a positive outcome. So it works, but it’s wrong. Another quagmire.

Batman cannot kill. That’s his one rule. Later films never understood, but Dark Knight predicates its entire story on a warped ideal of violent empathy. If Batman kills, the remaining good in the city fades.

To push Batman is Heath Ledger’s Joker in an Oscar-winning performance. The Dark Knight, although a fine play on police procedural tropes with immense IMAX-filmed action, it’s Ledger’s fearsome ticks and grisly power grab that elevate this beyond superhero cinema. Ledger forms a madman, suicidal as much as he is delirious.

As with this franchise’s overall style, Joker/Batman form that yin/yang. Here, it’s masterfully composed. More than good versus evil, it’s a battle of wills, one willing to murder, the other refusing in all circumstances. Pouncing on David S. Goyer’s lush script, Ledger takes the character in a distinct direction, shattering the serio-comic Jack Nicholson take by bringing this implausible bad man into the real world. Bale’s hoarse-voiced Batman is fine; Ledger’s Joker is a permanent screen sensation. Forever part of 2008’s zeitgeist, Dark Knight lasts because it found the Joker. 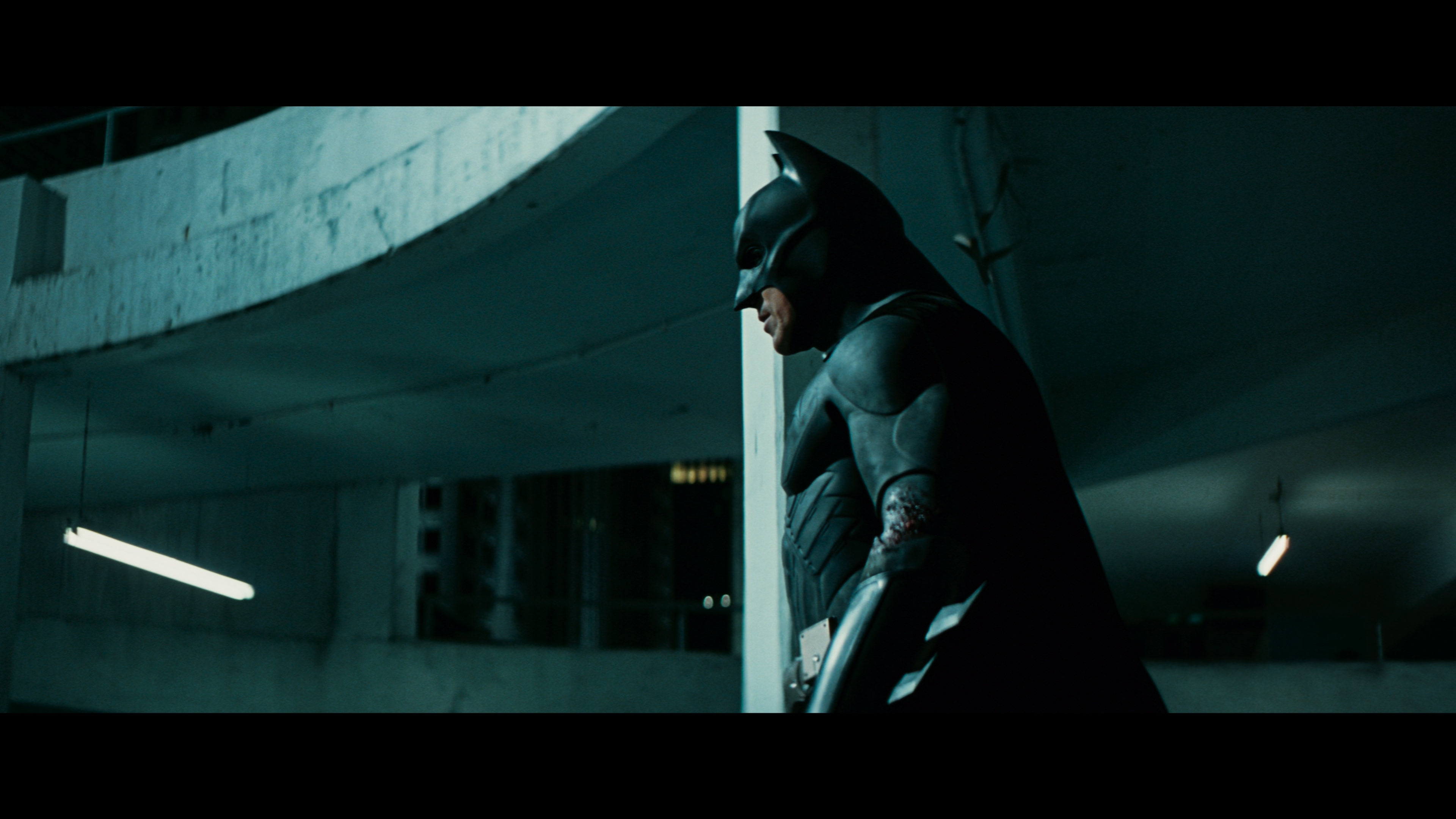 Dark Knight opens with 70mm glory. A bit of shimmering on building grates earns some eyebrow raising, but soon the breathtaking detail takes over. Clown masks show every drop of paint used and each individual hair. Gotham looks stellar, with top-end definition and clarity.

All of the IMAX footage sets this same bar. It’s visual perfection. That’s now helped by an HDR pass. The chase in Dark Knight’s center makes use of the large scale format, with intense reflections popping from the cars or trucks. Street lights glow, and from afar, the skyscrapers showcase their full potential with interior light bleeding out from their glass facades. Draped in flawless black levels, this is a marriage of total image purity.

Sadly, not all of Dark Knight used 70mm. On Blu-ray, the 35mm footage endured an ugly pass of filtering and edge enhancement. Thankfully, that’s removed from the UHD presentation. But not thankfully, this doesn’t have the look of a new 4K scan. It’s lacking. Definition softens throughout. Facial detail reaches a mediocre level without any moments in the 35mm footage where it rises above.

Grain appears mushy and lifeless. A shot of Joker around 90-minutes breaks down into a swarm of mosquito noise. Some of this slips into the dull shadows, typically a listless gray. Not helping things either is the color, generally a dull orange that shows little (if any) density. It’s as if Warner gave Dark Knight an HDR pass but forgot the deep color. This isn’t a knock against the monochrome look (that’s out of 2008’s orange/teal phase), rather the color’s depth.

As noted in other reviewed Christopher Nolan-directed films, he doesn’t tinker with audio. In the case of Dark Knight, the Oscar-winning and Oscar-nominated audio doesn’t change from the Blu-ray. That’s okay. This one is a bombastic audio thriller, with immediate satisfaction from shotgun blasts and a bus smashing through a wall. Soon, the Batmobile thrusts its engines and it sounds as if the subwoofer caught fire. Explosions jump out too, with substantial range.

A bit of dialog drops a little low, a small sacrifice in a rich and active mix. Surrounds push marvelous debris fields, while the chase through the tunnels echoes brilliantly. That’s Hollywood magic. Gunfire spread to the rears regularly. A couple of missiles pan between speakers to add more space.

Warner includes the original Blu-ray release and the bonuses inside this package. Extras are a bit of letdown, with only minor insight into the actual film itself. The first disc contains “Focus Points,” a pop-up feature that can be played during the movie, or separately from the menu. These run a little over an hour total, and some areas are skimped. It’s hard to get a feel for the miniature work from a two-minute segment. Despite the footage and Nolan’s narration, many of these are far too brief.

Over on the second disc are two 46-minute features. The first, Batman Tech, focuses on the gadgets and their real world equivalents. The follow up is Batman Unmasked which delves into the psychological side of the characters. Six episodes of Gotham Tonight also run 46 minutes in total, and are decently produced news segments reporting on films various storylines. Some trailers and art are the final pieces of on-disc content.

Heath Ledger elevates The Dark Knight above its definitively 2008 morality tale origins, but the IMAX-scale action doesn’t hurt either.