The first act of Batman Begins creates a perfect billionaire. The idea is to make the audience empathetic to rich, powerful people. That’s key. Bruce Wayne’s father doesn’t work in a billion-dollar corporate tower. No, he works in a hospital helping the sick. He built an entire railway system through Gotham City, a cheap ride so the poor can reach for opportunity. The grandfather? He helped slaves escape to the north through the underground railroad. The Waynes need halos.

Billionaires “like us,” don’t represent a problem according to father Wayne – greedy billionaires do. Yet, it’s an oxymoron Batman Begins never seems to understand. It’s an older Bruce Wayne (Christian Bale) believing that his wealth (and the gadgets said money creates) can save the city. In opposition is Ducard (Liam Neeson) who sees greed as fallible and Gotham a symbol of failure.

Batman Begins came out in 2005, a few years before an economic collapse caused irreparable harm to millions of people. It’s a last gasp film, firm in its vision that capitalism will sort itself out, even as people suffer in the interim. Remarkable is that the elder Wayne built his train system over what amounts to a shantytown. Those living in squalor don’t amount to anything, gentrified by a city trying to recapture its Gothic glory.

This is, even in failure, a fascinating film. In terms of marketability, it took superheroes forward, giving parent company DC an identity as a moody and harsh storytelling machine. In-between the financial lore is an Asian martial arts film, with the master and the student dueling in philosophy as much as kicks. Note that while Batman Begins holds the torch of eastern kung-fu, it’s not willing to showcase their uniqueness. The battles of Batman Begins suffocate by way of tight cinematography and jarring editing. That’s all American.

Whittled down, this is a personal story. Batman/Wayne endures a trial of redemption, left forever scarred by his parent’s murder. Fear, rage, and control; those elevate Batman from his previously thin characterizations, giving this vigilante anti-hero a basis to fight, and to cleanse as he sees fit. Underneath is a minor mob movie, fitting into place as the nefarious seed that undermines all good.

Only a few can now resurrect Gotham, Wayne among them, along with DA Rachel Dawes (Katie Holmes) and Jim Gordon (Gary Oldman). They represent the last of the righteous. As a trio, they act as something to aspire to. Bringing Batman into this world, depicting his fear as a handicap, hardly elicits the intended empathy. Batman Begins’ stance remains – wealthy people can fix anything. Trust in them. Some, anyway. Capitalism sorts itself out. 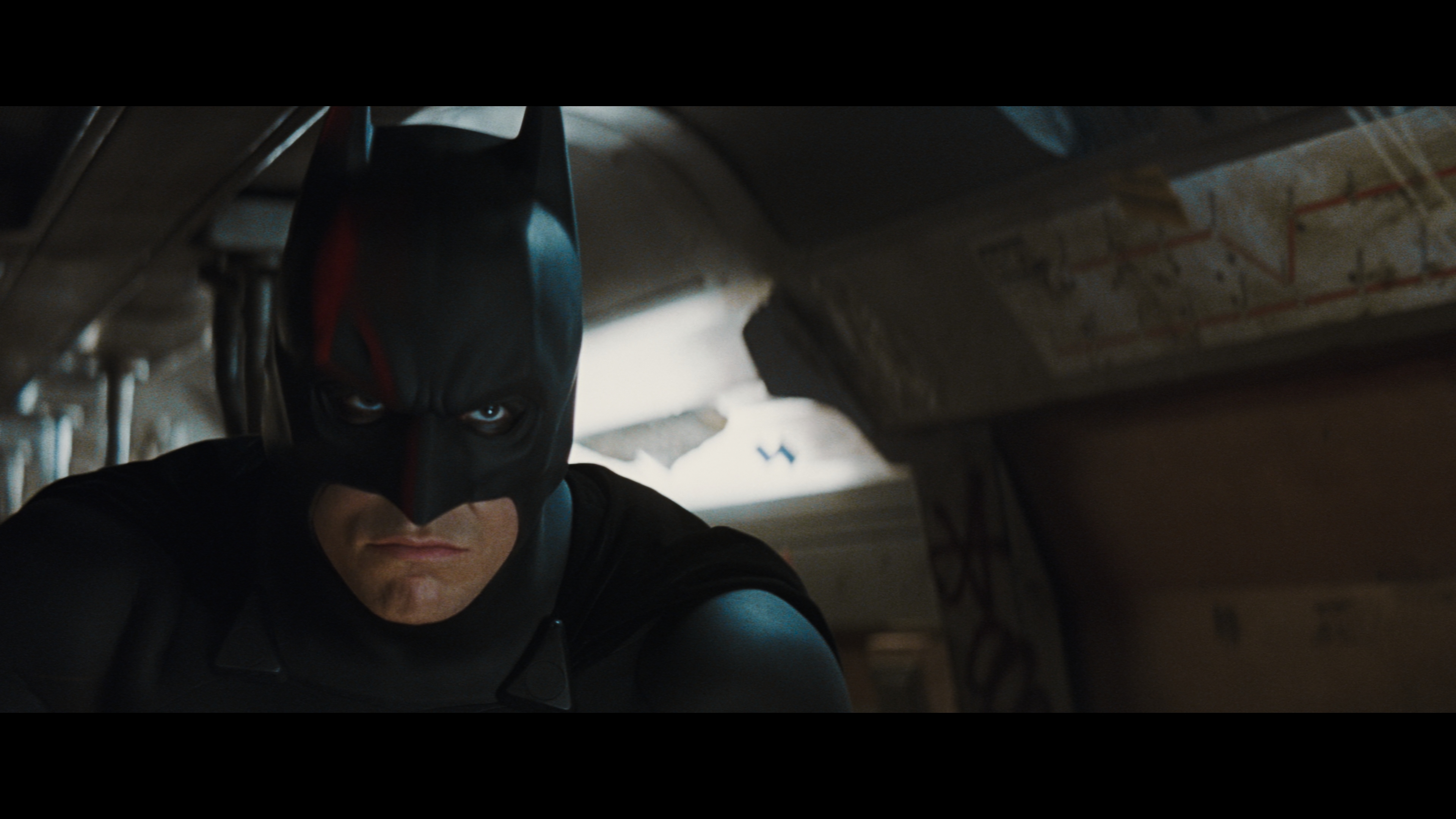 This is a bummer. The HD DVD and Blu-ray both suffered from crushing black and dull detail. Shame the UHD shares those qualities. Maybe not the brutally crushing blacks. An HDR pass helps a bit, giving better life to shadows, even if crush remains (look at young Bruce kneeling over his parents; his black suit blends into a mass). Batman Begins maintains the heftiness of the dark tone, with the city’s lights enriched by this HDR pass. Aerials stick out now, pulling out highlights with fantastic intensity.

That’s the best of this disc. Batman Begins doesn’t appear to carry the clarity of a new scan. Some visible flicker as Bale walks down the Manor’s steps indicates some processing remains. That shows in a number of close-ups, lacking fidelity and sharpness. Facial detail wanes. A few even bring in the possibility of heavy DNR.

Grain structure is another indicator, thick and murky. That’s wildly out of character for 35mm, doubly so with 4K. Both the mastering and encode prove bothersome. As Scarecrow’s plan pushes a narcotic haze into the frame, noise penetrates aggressively.

By way of tone, color holds to either deep oranges or blues. Some flashbacks of Wayne’s childhood involve some primaries, but Batman Begins stays firm in keeping the palette reserved. A bit of additional density gives Batman Begins some vigor on UHD, even if appears little was done to enhance the monochrome-like look in terms of saturation or depth.

Batman’s Tumbler still stands out as a premium example of subwoofer power. Engines kick in and rush to the low-end. It’s mighty forceful, and then Batman starts smashing through concrete, firing missiles, and launching police cars. That’s awesome material, not only for the low-end but the surrounds too that process debris.

As with Christopher Nolan’s other films on UHD (Interstellar among them), this remains in 5.1, a change over from TrueHD to DTS-HD meaningless in terms of impact. Thankfully, Batman Begins holds up, with a wide use of its soundfield. Scarecrow’s methods send voices around with clean pans between channels. In the Batcave, water drips and flows in each speaker. A car chase blends it all together, with sweeping effects of helicopters or police sirens jumping into the rears. Great stuff, but hopefully these films end up revisited.

There’s an additional disc inside the case. That’s all bonuses, as it was for the prior Blu-ray release. On the disc itself, you’ll get eight featurettes that combined run close to two hours. These cover the script, key scenes, visual effects, and more. A still gallery is self explanatory. Some fun Confidential Files are a series of animations detailing various items in the Batman universe. An MTV spoof with Jimmy Fallon is included, too.

A picture-in-picture feature runs throughout the film, and is loaded with cast and crew discussing their work. This is the only way to access these behind the scenes features and interviews however.

With a ridiculous thesis and hollow philosophy, Batman Begins is a sloppy start but survives on mood, style, and genre impact.

The following six screen shots serve as samples for our Patreon-exclusive set of 54 full 4K screen shots grabbed directly from the UHD: