A Documentary of Frank Sinatra’s Life In Palm Springs

Palm Springs, the desert oasis 100 miles from Los Angeles, served as Frank Sinatra’s home for nearly fifty years until his death. The music legend became a huge part of the local community and drove its growth, playing a sizable role in local civic and business affairs over his life. The city also saw the music icon live his life away from the cameras, which often offered a different view on Sinatra than his larger-than-life image would suggest.

Director Leo Zahn’s documentary Sinatra In Palm Springs: The Place He Called Home explores Sinatra’s fondness for Palm Springs and the Coachella Valley over his life. From his brief marriage to Ava Gardner to his semi-retired years late in life married to Barbara Sinatra, Sinatra’s personal relationships provides the focus for a look at Palm Spring’s development after World War II. The city became an enclave of Hollywood talent, including Bob Hope and the Marx brothers.

Sinatra In Palm Springs incorporates dozens of Sinatra-related film appearances and recent interviews with many personal Sinatra associates, including Barbara Sinatra, Mel Haber, Tom Dreesen, singer Trini López, Michael Fletcher, and others. We get a peek behind the curtains at the man himself as friends and acquaintances remember personal anecdotes and their memories interacting with Frank Sinatra. The rise of Palm Springs is entwined with Sinatra’s life and his impact around the city is recounted.

Some fascinating insights are revealed about the legend’s life, even if one gets the feeling Zahn is sugarcoating Sinatra’s past for access to some of his closest friends and family, especially his last wife Barbara. The singer would often host famous friends such as his Rat Pack buddies at his luxurious property dubbed “The Compound,” replete with guest houses and other amenities.

Frank Sinatra once built a helicopter pad solely for JFK’s visit and was greatly disappointed when the president didn’t come. He was very strict about the preparation of his Italian dining and would get visibly upset when he thought it didn’t meet his expectations.

The documentary covers Sinatra’s turbulent marriage to screen icon Ava Gardner and the stunning modern home they shared together in Palm Springs. Sinatra had it built in 1947 after he had made his first million dollars. Hollywood found the home interesting enough to use it in several movies as a setting. If you have the money, it can now be rented for private and commercial use.

There are a couple of notable holes in the documentary’s coverage. Frank’s children with his first wife, including Nancy Sinatra, go practically unmentioned despite having a huge role in his life. You get the strong feeling this project was driven by access to Barbara Sinatra and her circle of friends, the last of Frank’s four wives. The marriage to actress Mia Farrow is only briefly mentioned, in a curious remembrance from one of Frank’s friends about a drowning dog.

Frank’s early Hollywood career receives most of the attention for his professional life. His legendary music career is largely left out other than a few mentions of Reprise, the music label he founded in the early 1960s.

Sinatra In Palm Springs is a fine, if limited, documentary on Sinatra and the place he called home if you understand it presents one facet of the star and avoids salacious material. It provides a glimpse into his personal life around Palm Springs and how Sinatra helped mold the desert city into what it has become. What the feature isn’t is a comprehensive, no-holds-barred documentary on the man’s life and career. 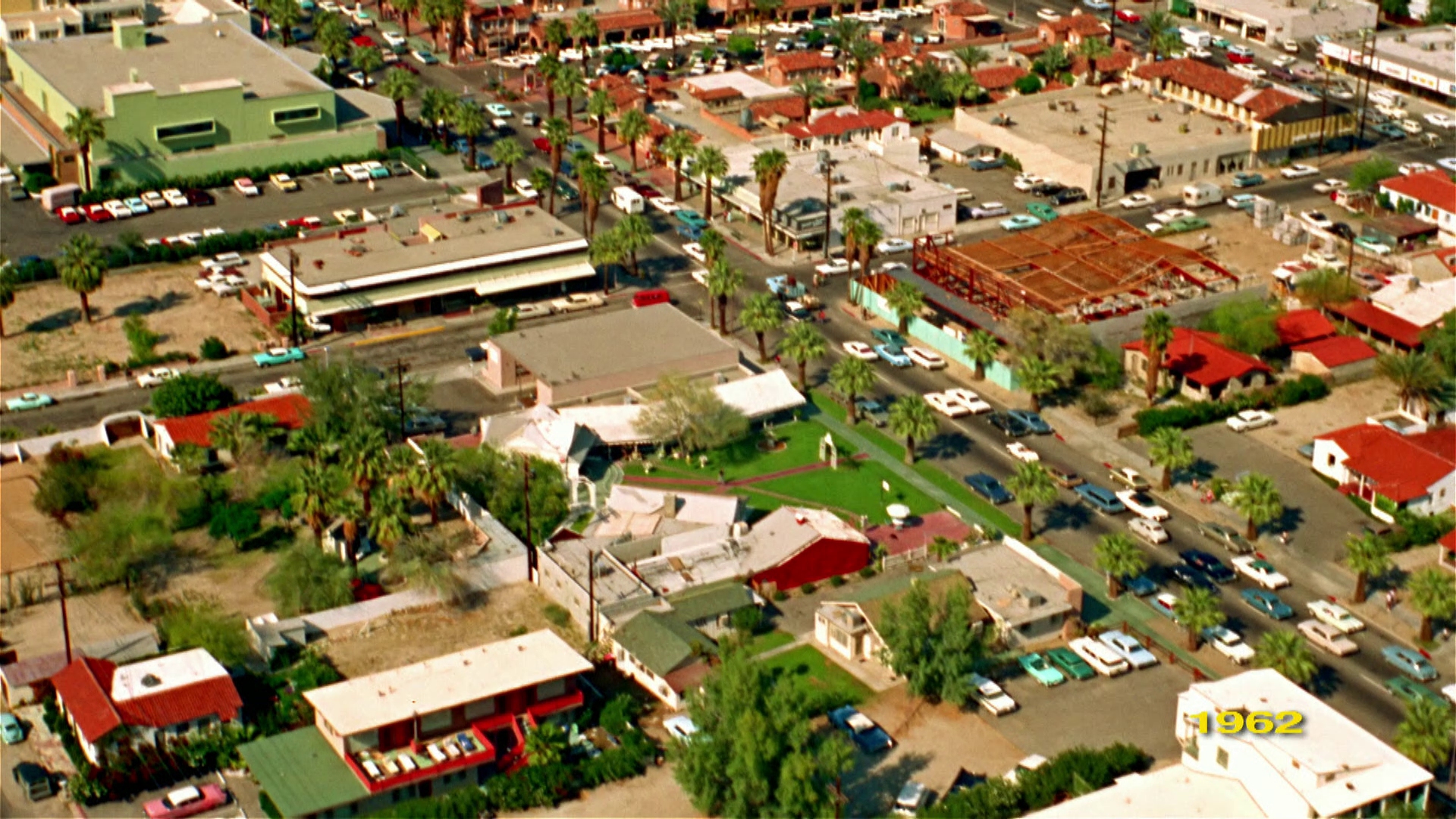 The 2018 documentary mixes an array of classic film clips, new aerial footage of Palm Springs, newly-shot footage of talking heads often from their living rooms, still photographs and more. The 1080P video has that shiny, high-gloss HD presentation common to news reports for the recent interviews. Older clips suffer coming from a variety of differing resolutions, often shown in inferior quality. Most of the film clips appear to have been sourced from DVD-quality sources, introducing interlacing artifacts and lesser detail into the picture.

Everything in the documentary is presented at 1.78:1 for the sake of visual continuity. The 92-minute main feature is encoded in transparent AVC on a BD-50. This isn’t material that tests the encoder’s limitations and is free of compression issues. Shout Factory has delivered a solid-looking presentation that reflects whatever limitations are in the documentary itself. The new interviews include ample definition and razor-sharp clarity.

Sinatra In Palm Springs comes with both 5.1 DTS-HD MA and 2.0 DTS-HD MA soundtracks. If you are looking for a strong surround presentation and immersive audio design, this is not it. The surround mix is limited by the nature of talking heads and older video clips filling up the feature. Nothing sounds particularly poor, but there isn’t much difference between the two different soundtracks’ soundstage.

The documentary’s focus isn’t on Sinatra’s music and largely avoids using his substantial music catalog. Archival concert clips of Sinatra’s “Fly Me To The Moon” performance from his latter years is about it. The documentary offers effortlessly clean, intelligible dialogue. The light score doesn’t get in the way.

Shout Factory includes several short documentary clips that were left out of the final product as extras. These are mostly anecdotes and personal stories from Sinatra’s friends and associates. They mostly reflect a more personal view of Sinatra and his personality. Comedian Tom Dreesen is heavily featured in several of these short outtakes.

The Actor (02:22 in HD) – Tom Dreesen gives a lucid description of Sinatra discussing his work in The Man With The Golden Arm.

The Compound (03:08 in HD) – Sinatra’s lavish property with guest houses and other amenities is discussed.

The Best Tipper (01:39 in HD) – Frank’s generosity at local restaurants is recounted.

Funeral (03:48 in HD) – Dreesen was touched when asked to be a pallbearer at Sinatra’s funeral.

Sinatra In Palm Springs: The Place He Called Home

Frank Sinatra and his life in Palm Springs are detailed by personal friends and associates in this limited documentary that avoids salacious content.

The 15 unaltered images below represent the Blu-ray. For an additional 14 Sinatra In Palm Springs screenshots, early access to all screens (plus the 20,000+ already in our library), 75+ exclusive 4K UHD reviews, and more, support us on Patreon.