My Best to the Coven

By 1989, New York still struggled with rising crime rates.. As Ghostbusters II begins Ecto-1 needs a car wash. Dan Aykroyd and Ernie Hudson step out of the car, their uniforms wrinkled. It’s as if they too feel the city’s tired, worn personality, battered by a decade of violence.

In a self-referential wink, Aykroyd and Hudson enter a birthday party. The kids want He-Man instead. Five years is a difficult gap when there’s a hungry audience; kids moved on. New York didn’t.

Ghostbusters II lacks the subtly of the first. That’s inevitable. In parallel, the animated Real Ghostbusters aired at the same time, drawing the younger audience, leading to brighter and cheerier happenings. Partly, that works though. It’s a movie about a neon pink paranormal ooze, weirdly attractive as it slithers underground, soaking up New York’s ugliness. To bottle that idea – an entire decade of hate, murder, and disdain for one another – into physical form is clever.

That’s the fight here, helping the Ghostbusters overcome their own frustrations. More or less, it’s an easy out to reskin the first Ghostbusters. This is the same movie; no point in denying it. The team begins, broken and desperate, so they can eventually reform. Replace the jail stint with the psychiatric ward; the courtroom battle stands in for the Sedgewick; Dana Barrett is impossibly unlucky, in a spiritual sense, of course.

The script though hides it well. Barrett and Venkman continue their relationship, but come at their pairing from a matured perspective. Kurt Fuller replaces William Atherton as the smug government lackey. That’s to form, setting the Ghostbusters against bureaucracy (both legal and political now). Yet, it’s tweaked.

With the slime crisis boiling from New York’s outbreak, Ghostbusters II is less about individual sacrifice, less antagonistic about upstart small businesses fighting to survive. Now it’s the city, unified as one under a patriotic symbol that so happens to gain life and wander the streets. Granted, it’s the reformed businessmen who put this together, but it’s inspiring in Ghostbusters II’s own colorful, comedic way. New York is weird, filled with personalities and eccentrics, yet the same figure unites them all.

While the creative spark shrank between movies, this is no less entertaining. It’s lean, it’s quotable, it’s smart. Plus, Ghostbusters II is just as beautiful in visually arresting visual effects. The courtroom scene alone, with Rick Moranis frantically trying to defend his new clients against a judge called “The Hammer,” contains enough gems to power the movie. How the slime is still angry as Moranis fights a “judicial restraingement order” remains Ghostbusters II’s unanswered mystery. 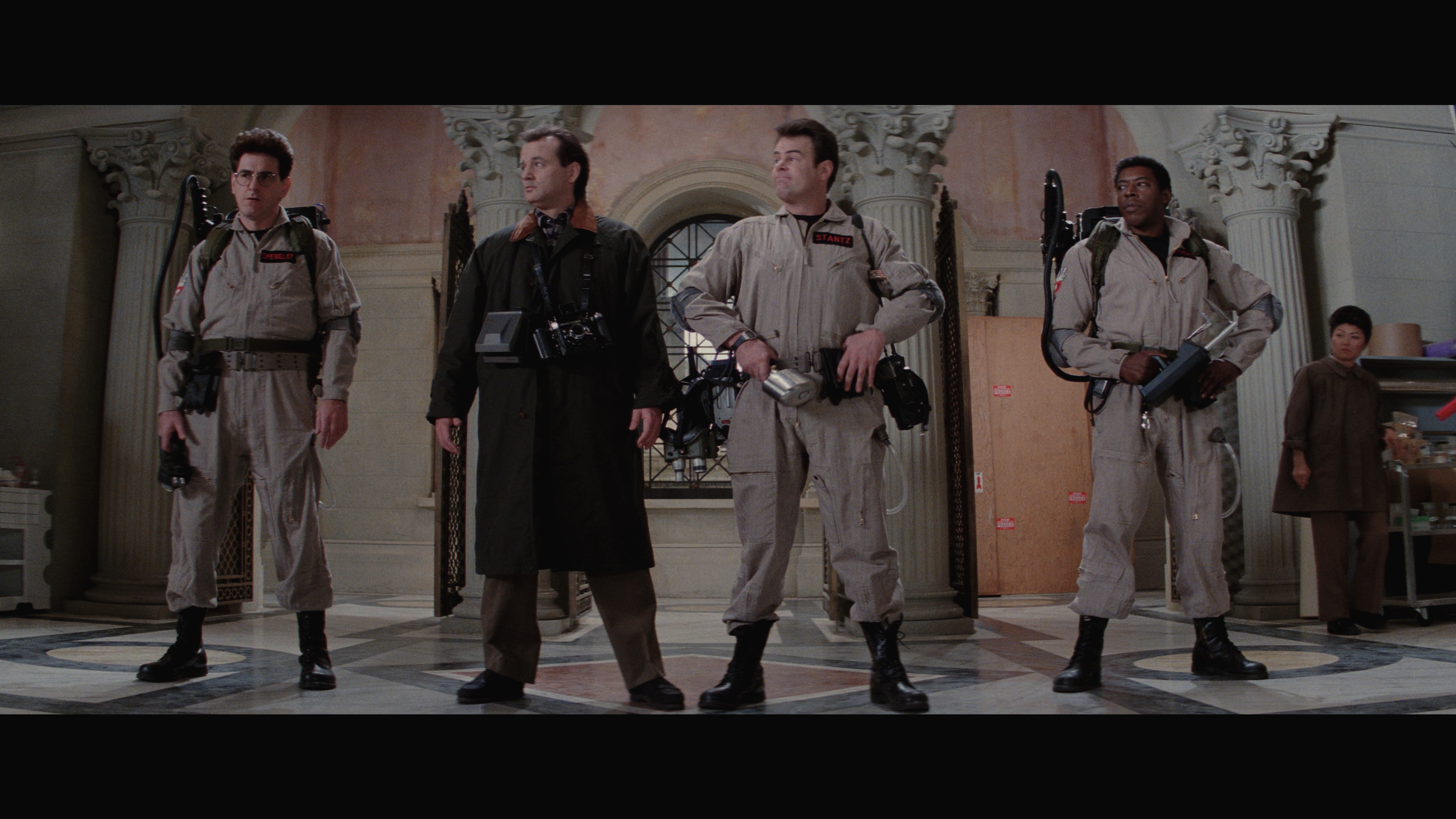 Other than different disc art, this is the same disc Sony issued separately on 4K UHD prior. The change comes in the form of a Steelbook containing the first Ghostbusters and refreshed extras.

Luckily, this is Sony. Their 4K catalog work continues to reach reference grades. Ghostbusters II ends up on that pile. With the brighter cinematography, the sequel is likely more fetching for most. There’s more contrast to take in. Grain lessens with a better film stock, thin, natural, and pleasing.

Plus, the fidelity leaps out. Facial texture keeps its consistency while the city itself provides additional material worth gawking at. In direct comparison to the Blu-ray, the resolution leap doesn’t excite, but it’s sufficient when rendering wide shots and picking up on their tiniest details.

Some potent low-end presence is the surprise star in this Atmos mix. When the Scoleri Brothers break free, that’s done with a jolt of deep, powerful bass, selling the moment’s shock. Slime rivers rumble as they go. By the time of the Statue of Liberty, her feet step down with outstanding power. The LFE sounds as if it were always part of the design.

Surrounds produce too. Slime throwers goop up everything, swapping speakers as they go. Proton streams act the same. Accurate panning as a subway train passes livens things up. Also, listen for subtle touches. For instance, the storm outside during the early scene in Ray’s bookstore, placed in the rears. Smart work.

There’s nothing to discuss on the UHD. You’ll need to pop in the Blu-ray for a new commentary track from Ivan Reitman, Dan Aykroyd, and producer Joe Medjuck. It’s… poor. There’s lots of dead air and they generally spend time describing or laughing at events on screen.

Drop in the additional bonus disc for a bit more. There’s a great surprise here in the complete episode of Oprah, promoting the movie with a good chunk of the cast on stage. It’s awesome, and runs 43-minutes. There’s an older EPK, but that still runs 41-minutes with lots of on-set footage edited between the typical promo interviews. Seven deleted scenes run a little over seven minutes, including one explaining why Dana seems at the forefront of each event. A sit-down interview with Aykroyd and Reitman discusses the sequel process, filmed a few years back. That runs 16-minutes.

A cool teaser trailer finally sees light from the archives and that includes the full commercial as partly seen in the movie. Bobby Brown’s undervalued pop jingle for this sequel is up last in music video form.

It’s the same New York in Ghostbusters II, yet this sequel finds itself battling not for the rights of businesses, rather the city’s identity.

The following six screen shots serve as samples for our Patreon-exclusive set of 65 full 4K screen shots grabbed directly from the UHD: