Universal produced Backdraft, a surprise given the Disney-esque tragedy of the intro. It’s near camp. A small child looks on, star-eyed, as his father enters a burning building. The father’s wink gives the inevitable away – a fireball erupts, engulfing dad as the kid stands helpless, in total shock. Tragic, were the sequence not so overdone as to fall toward dark comedy.

Worse, Backdraft’s intro isn’t needed. Details of the event filter into the story of two brothers, dueling over their masculinity and toughness like two bar brawlers. In this case, the fight extends into a series of visually arresting fires. Action is Backdraft’s heart.

Obviously this is a firefighter drama, but one built on wartime cinema’s bones. That’s not by accident. Bonds when fighting war crossover into the camaraderie of the fire house. Where post-Vietnam cinema ran through the ‘80s, Backdraft came late with a theme of abandonment during an unwinnable fight against fire, made worse by Chicago’s political shackles.

Backdraft leans on an entirely male cast. Jennifer Jason Leigh makes perfunctory appearances, in the script solely to romance William Baldwin. Inside the firehouse, blustery personalities clash, Baldwin calm and measured, his on-screen older brother Kurt Russell hot-headed and adrenaline seeking. Baldwin is portrayed as the lesser, limited in testosterone and forced to prove himself as a rookie. This isn’t about fire – Backdraft is concerned about gusto, measuring heroics by way of virility.

the most vibrant firefighting scenes in this small genre

In that, Backdraft doesn’t separate from mainstream cinema of its day. Russell plays a role typical of Stallone’s action fare, pure ‘80s by way of his defiant isolation. He’s so manly, he’s divorced and hardly sees his son. Russell lives on a boat, drinks booze, and runs Edwin Starr’s protest anthem “War” from an 8-track; he’s too cool for cassettes.

All this happens between the highlights, with seemingly uncontrolled fireballs raging toward stuntmen. It’s impressive material; in raw technical prowess, the most vibrant firefighting scenes in this small genre. Knowing Backdraft came about in the pre-digital era adds authenticity, with masterful choreography refusing to lessen danger.

While at times artificially elevated, those scenes don’t work without established brotherhood. That’s where the opening scene goes wrong. Backdraft self-corrects, and even if it’s blustery, chest-thumping machismo (plus a near final line from Russell so sappy and hokey as to blow the whole thing), the allusions to combat make sense. Brutish and alpha male, but genuine when depicting the incalculable courage of those willing to run toward crisis. 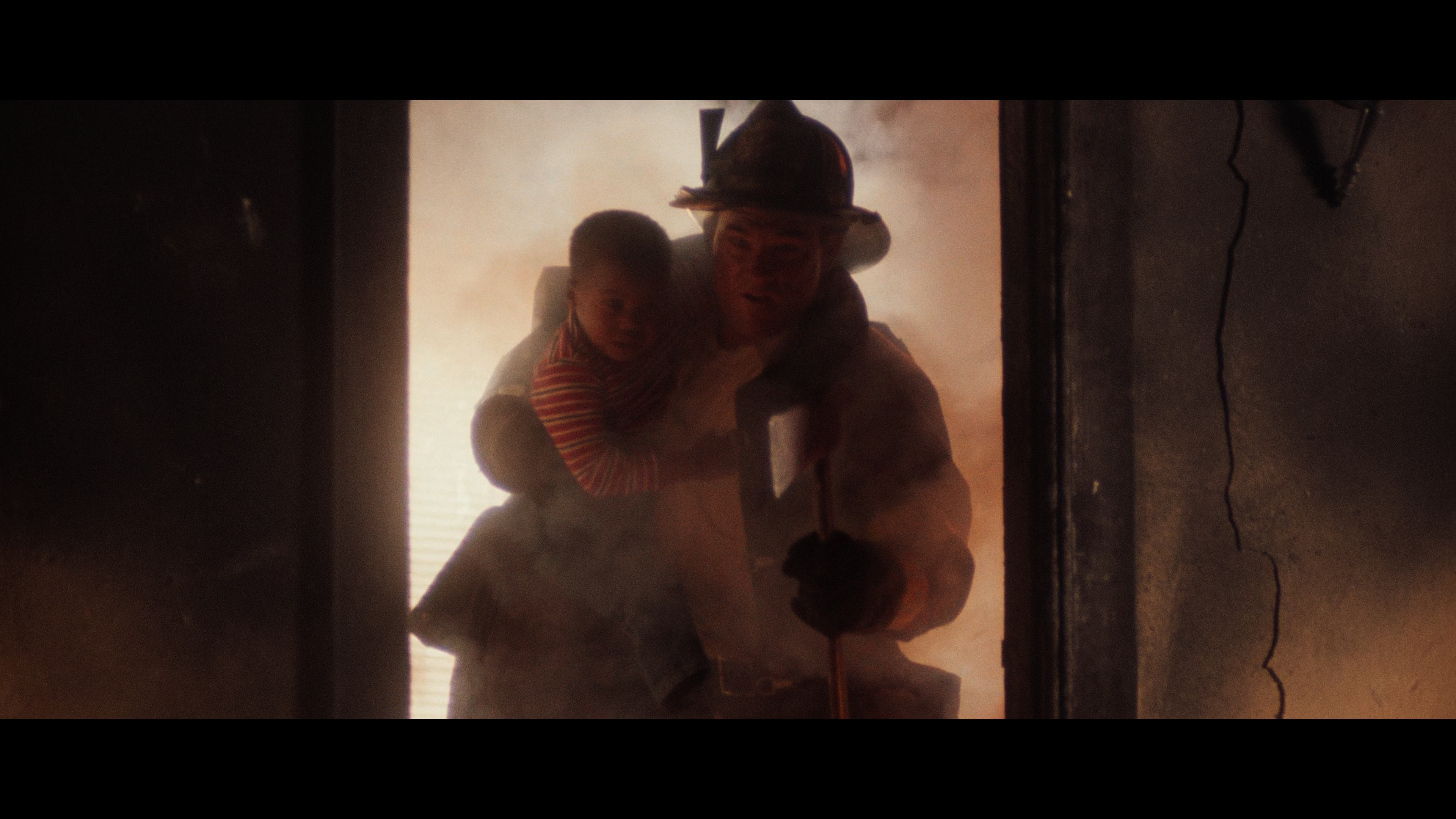 Universal treats Backdraft well on this 4K disc debut. The generous 4K scan reveals Chicago with startling detail. Baldwin pulls in to a parking spot under an elevated train track, with brick and steel structures visible into the furthest point. Likewise, dirt, soot, and sweat collect on faces, pulling out texture without fault. With strong bitrates, grain resolves without issue, a feat when faced with smoke/haze. That’s rare.

Added HDR doesn’t jump out at first. A firetruck glistens in the sun, and a light source pops. The fire though – that’s raw HDR at its pinnacle. Brightness and intensity give Backdraft’s action marvelous accentuation. Clashing with the darkened fightfighter gear, shadow detail survives while still creating images flush with depth. Dimensionality blooms.

The same applies for deep color, a nuanced approach that strives for accuracy. But again, fire becomes the home theater star. Oranges strike with beautiful hues. Late, a sunset casts a glow over some scenery, equally vibrant. Fire engine red, precise flesh tones, and Chicago’s general color all stick out.

A fitting choice for DTS:X with totally natural and pure LFE. It’s rare for a catalog title of this age to produce such organic, tight rumble. Every flare-up comes with unnerving power, and even build-up as air sucks through doorways adds ominous tension.

Positionals act up as well, if not with the splendor of modern mixes, then a nicely managed stereo upmix. Fireballs roar as they pass the screen, sweeping between speakers. Debris crashes down, enveloping if not precise; rear channels don’t stand out in any separate, particular way.

However, there’s not a day of age audible in Backdraft. Dialog matches the clarity of contemporary offerings. That matters. Plus, that makes echoes in the firehouse flawless and enriching to non-action sequences.

The UHD is host to nothing. On Blu-ray, the disc is identical to before. That means a short introduction from director Ron Howard, an interview with Howard and writer Brian Glazer titled Igniting the Story (15:00), a 20-minute casting featurette follows, with a fine look at the stunt work up next (near 15-minutes). Creating the Villain runs 13-minutes, detailing the pyro work. Interviews with real firefighters combine for nine minutes. A massive collection of deleted scenes run 43-minutes, certainly one of the bigger collections of cut material.

Backdraft isn’t without issue, but tension-driven action looks authentic and themes push the film in line with war cinema.