Asking Who We Are – Without Answers

Marc Streitenfeld composes a masterful theme for Prometheus. Violins rise, evoking a feeling of wonderment, discovery, and emotional excitement. There’s none of the peril transferred from Alien’s space-faring, suggestive fear. Prometheus is given a gift through music.

Under that is a waning, philosophical story of creation and belief. Humanity finds clues as to their origins, and then a trillionaire spends his wealth getting scientists to our species’ starting point. Prometheus raises those infinitely asked questions – “Why are we here?” – in the framework of Alien (of all things). Then, it proceeds to answer none of them.

Although embellished by powerful ideas, Prometheus dodges the most difficult, intellectual quandaries. It is, after all, a mega-budget studio production, glistening with glossy visual effects, flamethrowers, spaceships, and action, There’s none of the masterful risk of 2001; instead, Prometheus feels like part of the studio chain.

Primarily, this is observant sci-fi, as opposed to thought-provoking. We came into life via pain, we leave life via pain; that’s the depth of Prometheus. The opening scene depicts an alien humanoid disintegrating its DNA into a water supply, either beginning life on Earth or resetting things on another planet. Scintillating in potential, thrown away as Prometheus preaches about death, belief, and pitiful science.

“It’s hollow,” says one character referencing a mound on the horizon, yet they might as well refer to the overall film

For a moment, take in Prometheus’ laughable approach to character. A geologist, staring at the body of a new human species, freaks out and leaves. No scientist of any specialty walks away from such a sight. Prometheus is full of bunk science, from poking at the alien infant (never a good idea and a pitiful monster movie trope) to unmasking on an unknown, unstudied world.

That’s the thing: Prometheus is never as smart as it appears. Streitenfeld’s score brings in a boldness, even a magic to these proceedings. Yet, soon the plot devices wear thin, starting with Noomi Rapace feeling insignificant for her inability to give birth. Her character clutches a Christian cross, a touch of belief in a film surrounded by those committed to hard science.

This leads to a grueling surgery, Prometheus at its dramatic high as Rapace is gutted while awake, grasping at a nihilistic theme that not all creation or all life has value. And, that a search for answers is ultimately futile – revelations bring about suffering. In the end, Rapace remains hopeful. Her belief is ultimate. God provides. It’s not a problem for us to solve, no matter how compelling those answers seem. Worshiping a false idol will only lead to destruction. Seems cruel.

Through ambiguity, the meet-your-maker plot feels tenuous, a theatrical set-up rather than genuine exploration of thematic material. “It’s hollow,” says one character referencing a mound on the horizon, yet they might as well refer to the overall film in a break of the fourth wall. Prometheus’ final words, spoken by Rapace, “I’m still searching,” validates the criticism. Other than bolster the backstory (needlessly so) of a pop culture franchise, Prometheus continues searching for its own purpose. 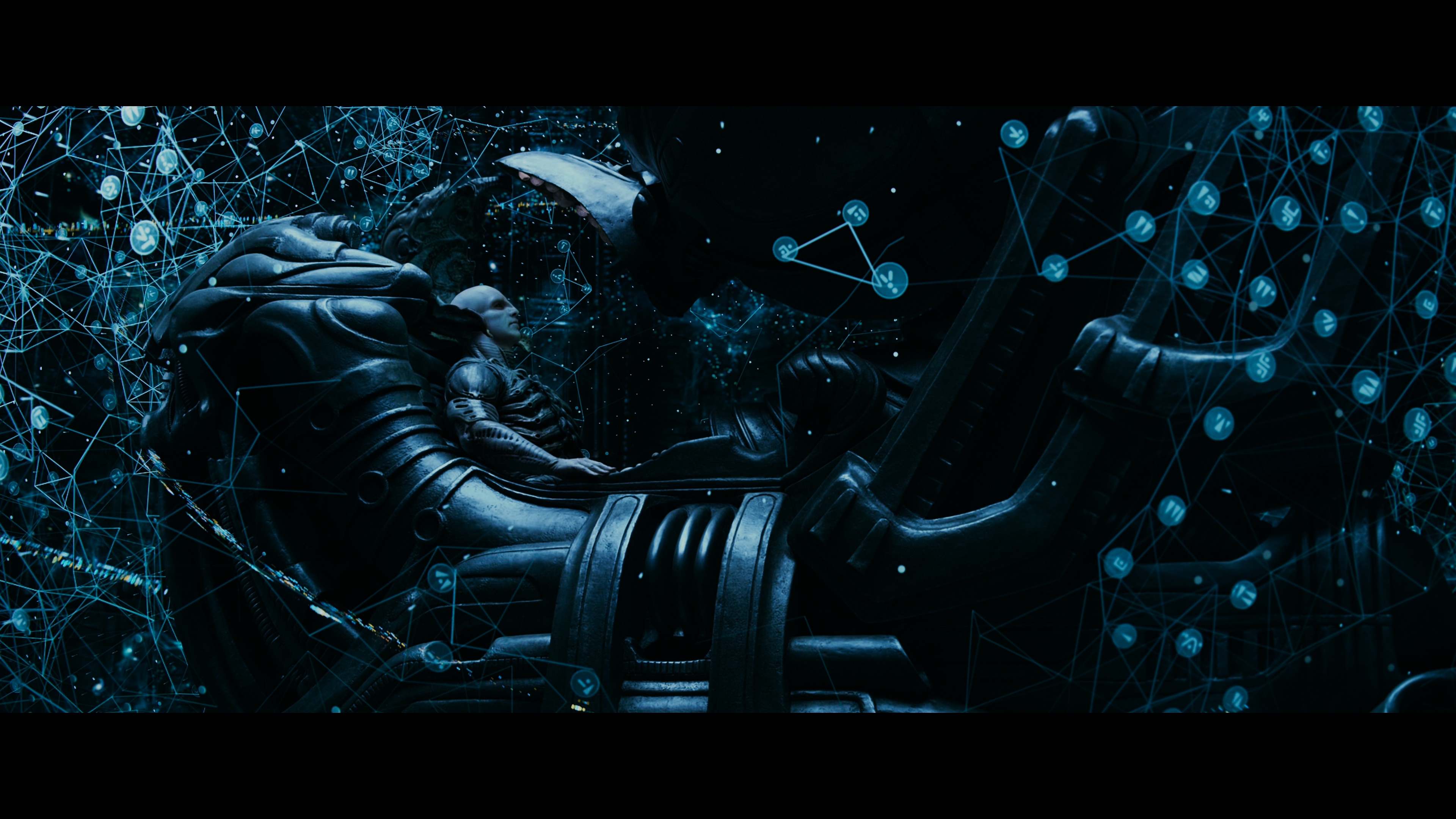 Director Ridley Scott and cinematographer Dariusz Wolski pair up for a digital production. Transferred to 4K from a 2K finish, the faults in the source video tech begin to show. Some of this matches the Blu-ray release, including some noticeable ringing and minor halos in the opening frames. In the upscale process, these messier parts of the source become exacerbated.

Particularly when dealing with visual effects, a coarse, even unclean quality inhabits the image. Rough hewn fits as an apt descriptor. Plus, noise is a persistent bother, at times raised to unacceptable levels, blotting out details.

Prometheus’ unnatural sharpness isn’t a total loss. Certainly, fidelity is evident, even spectacular in an inconsistent way. Images of the planetary surface, the ship, and scenes inside the cave system push tremendous definition. Facial texture sticks out, and various costume design is easily appreciated by way of this disc.

Note this isn’t much a jump though. Comparing the two formats side-by-side, the resolution produces similar texture. Fox’s HDR pass generally adds vividness to scenes in space, or to the glimmer of flashlights when against the pure black of cave interiors. The rest subsides, dulled and routine with only a little pop. That’s by design – Prometheus’ blandness of color pairs with the mood. A lot of pressure is then on the contrast that never dominates as expected to make the most out of some attractive lighting schemes.

Matching the Blu-ray in terms of format (DTS-HD 7.1), this sounds slightly different. Range isn’t as heavy, notable in the opening scene as the spaceship engines enter the mix. While strong, the bass response lacks bite in the same way. That continues, with the LFE held back from a prior high point. There’s rumble, if not to the same tier.

The rest sounds identical, with wonderful imaging capturing dripping water, echoes in a cave, and a reference sequence as a storm sets in. Winds sweep debris around in a totally believable soundstage. Action scenes all stick out, superb at the end as a tentacle creature makes an appearance. Sucking sounds fill out the available channels in an eerie bit of sound tinkering. By the time ships crash into one another, dust and dirt swells to fill the available space.

On the Blu-ray, Fourteen deleted scenes have additional commentary, and given the often breathless pacing, some of these almost feel necessary. Peter Weyland Files are four viral marketing videos spread around the ‘net, now preserved on disc.

Prometheus subsists on philosophical ideas for which it never has an answer for, leading to a droopy story full of awful science.