Aboard the Nostromo, a small crew lives and works on board a vessel that hardly seems functional. Its keyboards clack like typewriters, the CRT monitors release crummy images, and the rundown halls barely pass safety protocol. Arguments among the crew fire up over a fair split of the take, with the lone black man on the lower end, asking for scraps. Profit over people, and with a damning conclusion.

Some of Kennedy’s aspirations remain. Landing on an unknown planet as commanded by their corporate owners, fuzzy scenes from helmet cameras recall those first images of the lunar surface. There’s excitement shared with dread, even terror at the possibilities.

For mainstream sci-fi, Alien’s remarkable sophistication is a hallmark, a mere update of It: The Terror from Beyond Space, but done with such an eye for isolation, quiet, mood, and tension as to belie an era beginning to focus on quantitative visual effects post-Star Wars. It’s the antithesis of burgeoning summer cinema, with absolute patience for dread.

There’s nuance. Interpretations of the material spread from the gruesomely sexual, smoldering feminism, to a harrowing example of the human lifecycle – we’re born, we fear, we fall into sleep without knowing what comes next. All produce new ways to watch and appreciate Alien, sensational in all those themes, and even on its surface, a tantalizing genre example that reconsiders cinema’s monster movie.

Certainly, this is a movie of anxiety. Nostromo’s small crew never stands a chance. Alien clipped the edge of the ‘70s, skirting Vietnam’s anguish. The alien is ferocious, undying, and forever attacking, with Nostromo’s dark halls a metal-and-rubber forest with the humidity inherent of Vietnam’s jungles. Alien is also depressive, mourning what became of space travel seven years after the final Apollo mission. Here, space travel is treated with ambivalence – a success, in a way – but squandered into a mundane, routine form without the thrill.

With the sequels, Alien poured on its anti-capitalist theme, but the original is at its most unforgiving. Its characters feel, look, and act natural. Unknowingly, they exist only as pawns, numbers on a spreadsheet. Alien forms them into the best of the blue collar, making its case by representing the toilers among us. They’re the oppressed, forgotten class. Even Alien recognized that decades before the wage gap left the middle class hemorrhaging. 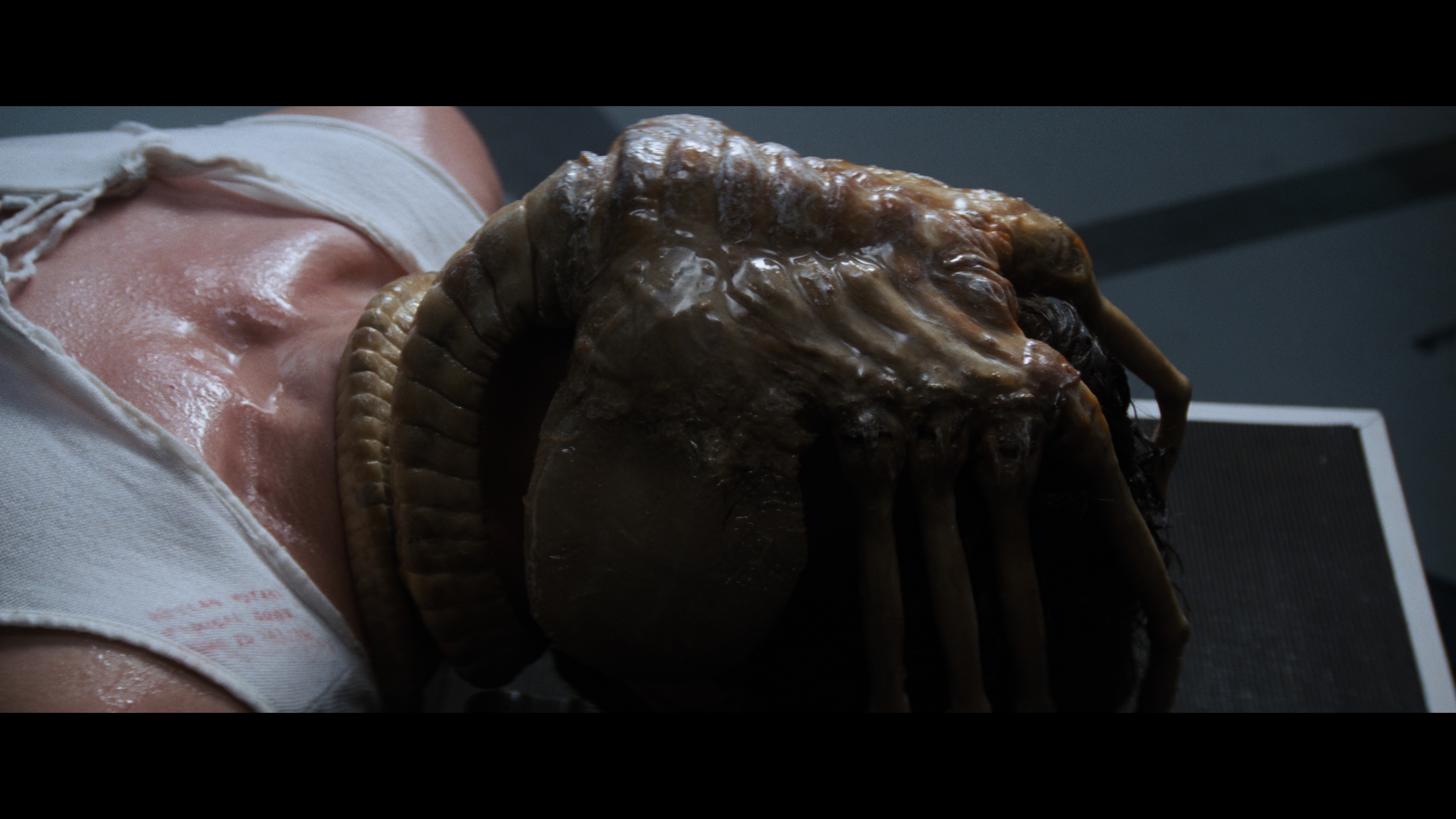 Fox debuts a new 4K scan for Alien’s 40 anniversary. It’s marvelous. With such tight locations, black levels necessitate perfection. This HDR pass crushes where needed, and keeps shadow detail elsewhere. It’s beauty found in pure, absolute black – including those scenes in space. While brightness isn’t preserved with the same intensity, it’s still standout. The subtle HDR work blooms flamethrowers and spots of gleaming sunlight in a controlled manner as to not run afoul of the original cinematography.

Preserved grain maintains pleasant consistency. Fox’s encode shows no sign of struggle, given plenty of disc space to resolve the source material. Like with previous releases, the print suffers no damage, cleaned of all imperfections.

The new scan revels in definition. Close-ups find facial texture en masse, while mid-range shots impress the most in direct comparisons. Resolution between the 1080p and 4K is quiet evident at distance, without any muddying or loss when at 4K. Visual effect scenes hold up, capturing the intricacies of the model, suit, and puppetry work. Practical techniques survive the scrutiny of advancing technology.

Left to be is the color, ignoring a cooler, digital grading from before. Here, flesh tones exhibit pure, organic hues. Some vivid saturation brings out the attractive green font of Mother’s screen display or the searing orange of fire. All of the steel looks as such, with vibrant gray sticking out from the dominating black. Dense reds add to the eventual splatter.

Fox uses the same DTS-HD mix from the Blu-ray. It’s a fine track. The elaborate audio work makes sure to follow every visual cue, with voices spreading around the front soundstage and persistent Nostromo ambiance. Steam pipes and vents call out their presence, rears just as involved as the stereos. LFE supports engines during on-screen flyovers, a natural power that sounds in sync with the rest of this source.

Although some dialog carries a harsh, weathered sound, most of Alien carries a newness that indicates next to no evident aging. Jerry Goldsmith’s score sits primarily in the highs with violins rich and clear, with again, no signs of age.

The same as before, and less than previous editions. The 40th Anniversary is celebrated with new 4K scans of the 1979 theatrcial and 2003 director’s cut. Everything else is as before, including two commentaries (one from 1999 with Ridley Scott alone over the theatrical version, another from 2003 featuring Scott alongside cast/crew members). Two isolated scores come in the form of Dolby Digital, one of them Goldsmith’s original score before post-production changes. Seven deleted scenes run a little under seven minutes.

Note both the UHD and Blu-ray contain the features.