Like many of its type, Black Gunn is not shy about wielding its social power. A stern-faced James Brown stares down a white senator, pointing out racial disparity in Congress and down the line with judges, governors, and others. Explicitly racist mobsters lob slurs, denigrating the Vietnam service of black Americans. A member of a black power group expresses dismay when working alongside police to take down organized crime.

Black Gunn lays it all out, ferocious, violent, and with time, certainly corny in its ‘70s guitar twang and dated dialog. James Brown is a force though, in the lead as Gunn, owner of a local nightclub, with enough muscle to lift mountains. He’s imposing. So is the direction with a penchant for tight, uncomfortable close-ups forcing an audience to confront bigotry in perspective.

It’s a movie laced with anxiety and fear, with piles of generic white men for villains and growing discontent in the black community gathering to form BAG – Black Action Group. The latter features a number of veterans, disenfranchised after returning home from Vietnam and looking for a place in society.

Black Gunn is all violence, antagonistic were it not so often right in its arguments

BAG’s methods lead to Black Gunn’s catalyst, a heist that ends with the acquisition of a gambling ring’s pay-off books. Never mind that though. Black Gunn is all violence, antagonistic were it not so often right in its arguments. Brown’s point about a single black Senator representing nearly half of the population was right in 1972.

In terms of blaxsploitation, it’s quite mundane, stuck in a budgetary rut, if benefiting from the grimy output. Black Gunn looks rundown and poor, an unfortunate snapshot of black America circa post-Civil Rights and Malcolm X. That anger fuels the routine shoot-outs, with the finale finds cause for a slew of explosions including one that sets the main villain aflame. That’s Martin Landau by the way, and it’s unreal to see him as reactionary, racist scum.

Black Gunn benefits from a touch of enthusiasm and energy. Rarely does it descend to boredom, and even with its exaggerated depiction of race, still has some grounding. James Brown alone is enough to give this one a go. 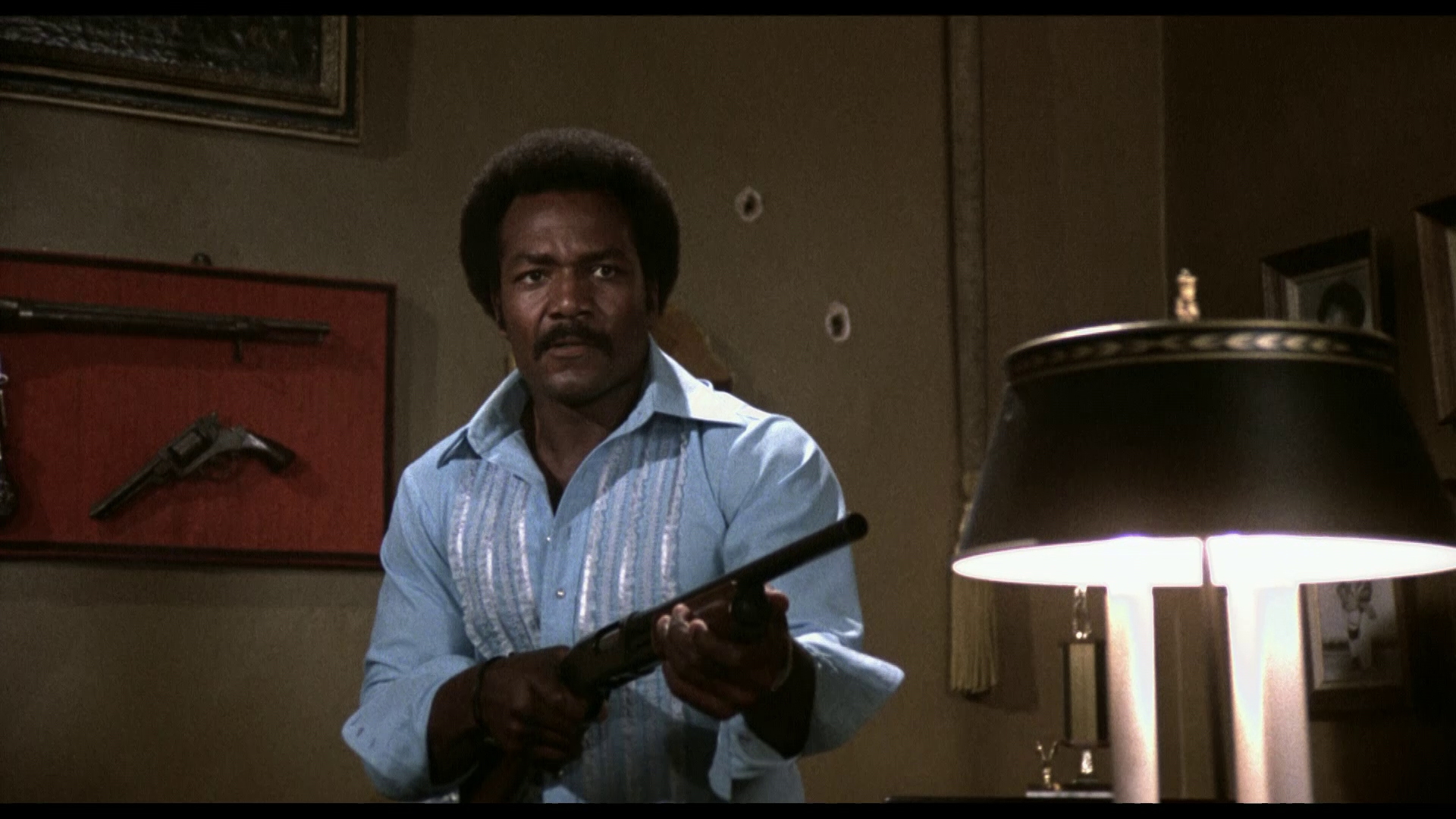 Better than The Take (included on the same disc), the presentation is still crushed by compression, but the visual space indicates natural resolution and a visual grain structure. Dotted by dirt and occasional scratches, the print is adequate enough. Detail jumps out in daylight exteriors and close-ups. Texture is lost by way of the encode, nothing else.

It’s in the shadows where things collapse. Without pure black to hide artifacts, blocks appear all over the frame. That also cuts away dimension and depth, leaving things flat and mushy as cheaper film stocks tend to do.

Hollow dialog is an immediate problem. Certain lines no longer sound intelligible. Part of that is budgetary with background noise filtering in and no budget for ADR, The rest is age. DTS-HD or not doesn’t matter, although uncompressed audio likely helps.

When action kicks in, piercing highs strain things too far, overly loud and screechy. Gunshots hit an ugly peak and mash together when bunched up in shoot-outs.

Nothing here for either film on the disc.

James Brown is an imposing lead in Black Gunn’s look at racial injustice circa the early 1970s even if the film is derivative.

The 15 unaltered images below represent the Blu-ray. For an additional 15 Black Gunn screenshots, early access to all screens (plus the 20,000+ already in our library), 75+ exclusive 4K UHD reviews, and more, support us on Patreon.