Mercy is for the Weak

Watching Karate Kid for its teen drama isn’t enlightening. The scrawny new kid from out of town is bullied, he scores the blonde cheerleader, and at the end, conquers the bully in a Rocky moment. It’s generic, a coming of age, high school sports movie, as influenced by previous underdog stories as much as it’s copying them.

The success is in the refinement of Karate Kid – those underlying touches that capture an era, a changing society, and financial pressures of the Reagan era. Daniel LaRusso’s (Ralph Macchio) single mother moves coast-to-coast, chasing a booming computer economy out west. Struggling, LaRusso becomes the underclassman among those privileged by wealth. For the script, that set-up works. For the ‘80s, it’s an encapsulation of the rich-get-richer Wall Street bubble.

There’s nothing inherently wrong with Karate Kid’s… kids. In terms of inspiration, LaRusso finds his father figure in an elderly Miyagi (Pat Morita) who uses manual labor to instill the perseverance and patience of martial arts. It’s crude – purely Hollywood drivel, even trashing Japanese traditions – yet enough to reach the targeted audience.

Where Karate Kid finds itself is in its adult characters. The theme here isn’t bullying; it’s war. Miyagi hides his past in hobbies and bottles. His wife died in an interment camp giving birth to his son while he was serving, earning a Medal of Honor for a country that segregated his people. Karate Kid confronts ignorance, racism, and wartime cruelty through Miyagi, with subtlety.

On the other side, John Kreese (Martin Kove), a vicious, unrelenting karate instructor. On his dojo’s wall, a picture of Kreese during service in Vietnam. The insinuation is that Vietnam, as with most veterans of the failed invasion, push those feelings of anger onto a new generation. That’s Karate Kid – a story of how veterans deal with and pass on their experiences, one the gentle passive easterner who learned the cost of violence, the other part of a post-Vietnam movie cycle who believes additional western violence is an answer. Like John Rambo, Kreese still wants to win. He’s raising his students to do so.

Karate Kid is a story of generations, what one passes down to the other. Daniel is effectively rescued by Miyagi, saved from teen angst as much as future filled with resentment. And while Kreese and student Johnny Lawrence (William Babka) receive minimal characterization, it’s less about their development than it is a social idea. War poisoned those born from baby boomers as it did those of the previous era.

For a mainstream studio film, this is a standout in portraying pent-up grief, and certainly without the glorification of combat. It does so under the cover of a contemporary, familiar plot, presenting an anti-war stance with careful nuance. Karate Kid famously ends on a smile. It’s hopeful. Miyagi’s exist. Whether they exist in enough number as to not pass down the worst of human behavior was left to the sequels. 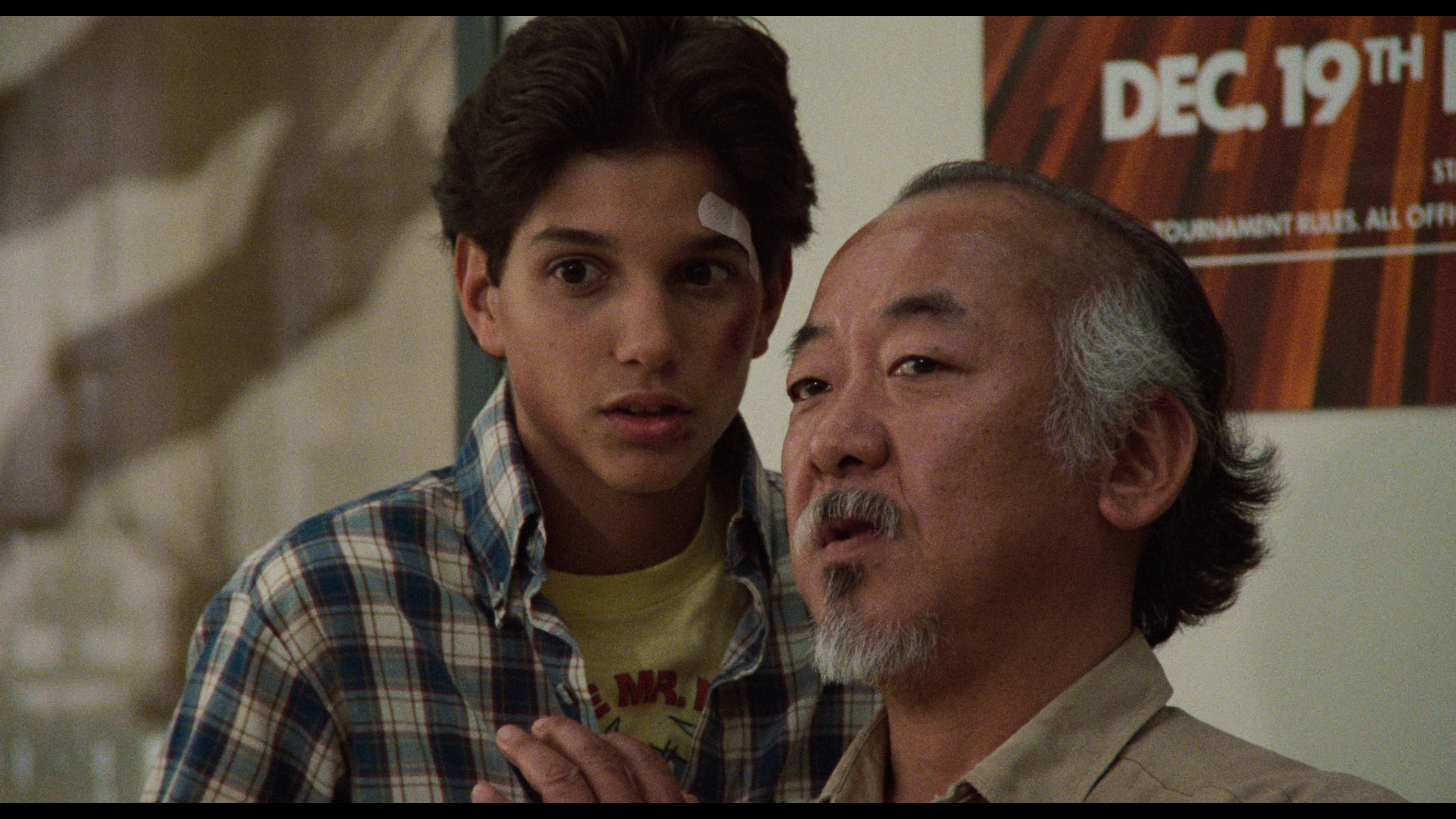 Another masterful, true 4K presentation from Sony. Ridiculously sharp imagery begins at the outset without wavering, with exceptions for optical dissolves. Detail jumps out, with precise facial definition produced in droves. The literal texture of Karate Kid never showed as well as it does here.

Natural color pushes primaries, generous with reds and blues. The yellow of LaRusso’s new car beams as he drives it into a parking lot, under night skies. Subtle greenery of Miyagi’s yard or Bonsai trees looks spectacular when under deep color.

Sony splashes HDR over the image, keeping things reserved by way of rich black levels and occasional highlights. On the beach, motorcycle lights and a small bonfire reach superb intensity. Pleasing gradients fall into deep shadows and no visible crush.

Remastered with Dolby Atmos, this upscale from the original stereo is remarkable. The music is fantastic, clear in the highs and using the subwoofer for kick on the low-end. That’s impressive, if mundane in modern standards.

What works is how this mix expands around LaRusso and company. California comes to life, busy and overactive when in the city with ambiance pushing in from every direction. When with Miyagi, bird chirps reach the stereos and rears. Action scenes send bikes panning around the soundstage. Voices perk up when off-screen in the Cobra Kai dojo.

By the finale, this all merges into the tournament. An appreciative crowd fills the soundstage, while the classic “You’re the Best” pops in to make itself known. All of this sounds natural, as if mixed for Atmos upon release. Clean separation from a stereo track rarely works this successfully.

On the UHD, there’s a new bonus, running about 10-minutes with cast reflecting on the movie. Martin Kove goes so far as to draw a quality comparison between Karate Kid and Casablanca in an eye-rolling moment, but it’s otherwise worth a look.

The rest resides on Blu-ray, the same disc as before. The Way of the Karate Kid splits into two parts for 45-minutes of content, bringing back the cast and crew to discuss their time on set. It’s a sharp look back. Choreographer Pat E. Johnson discusses his work for 13-minutes in Beyond the Form. Bill Conti’s score earns its due in East Meets West. Finally for the featurettes, a look at raising Bonsai trees turns in an informative 10-minutes.

Note a pop-up track optionally runs along with the movie, and a commentary was luckily recorded before Pat Morita’s passing.

Underneath the routine teen drama and coming of age theatrics, The Karate Kid finds a somber story of war’s effect on multiple generations.