Citizens of a small American town, out west in Arizona, wonder aloud what the scientist living 20 miles out in the desert is doing. Post-WWII paranoia of outsiders plays into Tarantula. Also included, those fears of mad science that permeated the whole of Universal’s famous monster output of the ‘30s and ‘40s. By Tarantula’s time – 1955 – the cycle began anew, just bigger.

Tarantula molds itself on the popularity of Them, a film from the year prior, shocking audiences with desert-dwelling ants. Here, it’s one spider, but a big one. The poster art claims 100-feet tall, an exaggeration of marketing (this arachnid grows to around 40 feet) but let that be. It’s still oversized, it still eats people, and knocks things over. That’s what everyone comes for. Phony, but entertaining at the right time.

This starts because of Leo G. Carroll, as recognizable a face that’s ever appeared on screen. His science experiments, meant to increase the food supply, brings rabbits to full growth in six days and turns guinea pigs into giants. Why he doesn’t work on corn isn’t explained, but killer corn doesn’t have the same kick as bugs. That’s the “mad” science though, uncontrolled, unregulated, and causing problems for good people. Carroll plays the old-fashioned lab coat-wearing scientist; it’s surprising the studio didn’t cast a beatnik to complete the fear mongering.

Tarantula persuades audiences to only accept those who fit, and only those

Of course the growth formula is radioactive. It’s the isotopes that create a reaction, putting Tarantula dead center in the nuclear menace genre, with the apathy toward nuclear fact. Radioactivity is only a nuisance, playing down reality, and treating it as a nothing other than a fantastical, impossible thing, capable of being dispatched by the resources of a small Arizona town.

Isolation is the theme. People of Desert Rock live in a town that looks barely removed from the days of the old west. Even the stock players appear – the sheriff, the coroner, the doctor. Tarantula persuades audiences to only accept those who fit, and only those. Sneer at outsiders; they unleash man-eating spiders, after all.

Without federal support, Desert Rock’s denizens deal with the problem, sussing out truth and trying their darnedest to handle the threat. It isn’t until realization sets in that dynamite won’t work that military jets drops in, blasting the sucker with napalm (from a plane manned by Clint Eastwood in a small cameo). The Air Force will help any self-sufficient town when those educated types start filing in. After all, there’s no problem that cannot be solved by American military intervention. 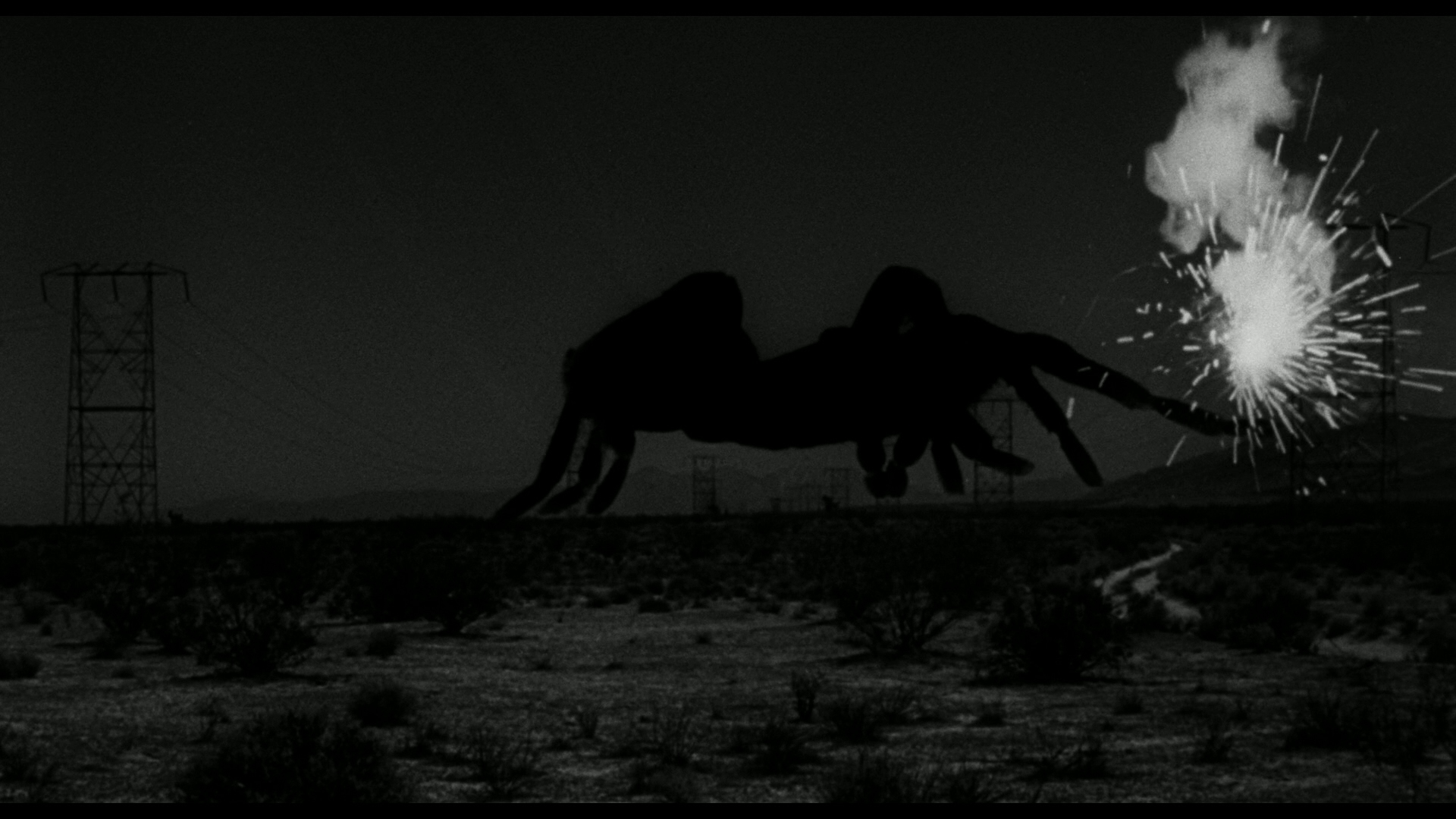 Of the three ‘50s sci-fi outings from Shout/Scream Factory so far (Mole People, Deadly Mantis being the others), Tarantula wins the A/V game. This presentation is gorgeous, with brilliant sharpness from a great, clean source. Minimal damage appears, allowing the naturally detail-rich images to shine.

Also notable is contrast. Gray scale finds a perfect calibration in its favor. There’s a night scene not long after the spider smashes a house. Police cars pull up, their black paint dense and pure, with moonlight reflecting from the metal with intensity. The mixture of light/dark is consistently flawless, with no dips in richness.

Encoding handles a stout, persistent grain structure without devolving into a mess of noise. It’s natural, film-like, and appealing. Tarantula gives nothing to fault. This transfer is pure.

Using some stock Universal music cues and some new to fill in its drama, the DTS-HD mono mix manages both clean highs and lows. Drums beat with clarity, horn sections blare with vivid treble. When mixed with action, the elements collide without an issue, including explosions, dialog, and spider screeches.

There is some age. Some ADR dubbing on Agar’s part sticks out during an investigation scene, but that’s more on the overall clarity being stable enough to note. Dialog is otherwise clean, with some harshness expected of the era.

Historian Tom Weaver jumps into the recording booth with another great commentary, bringing in a few guests to fill time (including Joe Dante for a brief moment). A fine stills gallery joins a poster gallery alongside the trailer.

Tarantula follows the formula of the ’50s big bug genre, but it’s well groomed with an anti-science and isolationist angle.

The 15 unaltered images below represent the Blu-ray. For an additional 21 Tarantula screenshots, early access to all screens (plus the 20,000+ already in our library), 75+ exclusive 4K UHD reviews, and more, support us on Patreon.