This is not a kind movie to Cheney (Christian Bale) who, in a way, weaseled his way to a Vice Presidency, using the inexperience and mental blindspots of George Bush Jr. to seize indirect control of the White House. Cheney’s ambitions killed people. Cheney employed focus group testing to quite literally sell a nonsense war, finding the right terms (“estate tax” became “death tax”) to sell that tired public on policies that crushed them underfoot. Vice mocks every bit of this voter pandering.

Adam McKay directs. Eleven years before Vice, he helmed the memorable absurdity of Step Brothers. He brings the same sense of sarcasm into American politics, but the story he tells isn’t inherently funny. Ironically funny, maybe, at how easily citizens find themselves bamboozled by political processes. Part of Vice places the blame on the voters. In an ending monologue, Cheney (Christian Bale) looks direct at the camera and says, “You chose me. I did what you asked,” which isn’t inherently true – he did what he wanted based on a campaign of fear at a vulnerable time in history.

The play for laughs ventures toward distressing territory. Vice asks how this hard drinking, bar brawling, college failure ever made it to a role in the White House. Turns out, with little embellishment, Cheney just found ignorant people, sold them on lies filled with big words, and turned into a figment of intelligence – artificial intelligence, in the real world. He did it to make up for his past behavior, and in the end, became worse for it.

Vice is effectively an origin story of the Trump White House

In a year of BlacKkKlansman and others, Vice is another political giant. Vice employs a narrator unafraid to draw parallels to the current administration. That’s not subtle either. Cheney found a non-existent boogeyman, went on the offensive, and created more boogeymen. Republicans do the same now – immigrants, middle easterners. Vice draws ire when it comes to the absurdity of money flowing into the system and how that impacts legislation, but this is a film of human cost. Intercut with scenes of innocent Iraq citizens, clutched in terror under a table as bombs fall in their neighborhood, are images of migrant children locked in pens, crying.

With the final scenes, Cheney gets a heart. A literal heart. With lifelong pulmonary problems and by luck of the draw, a donor becomes available and Cheney earned a new lease on life. In Vice’s fiercest assault on Cheney’s absurd policies, his new life is followed by damning text of what the Bush White House hid and enacted policies continue to corrupt a system in favor of those who need no more help. That a movie exists to distill an entire administration down into a two hour piece of entertainment for those tired people – and it comes from the backing of a massive machine like 20th Century Fox – is remarkable. But it happened. And, it’s brilliant. 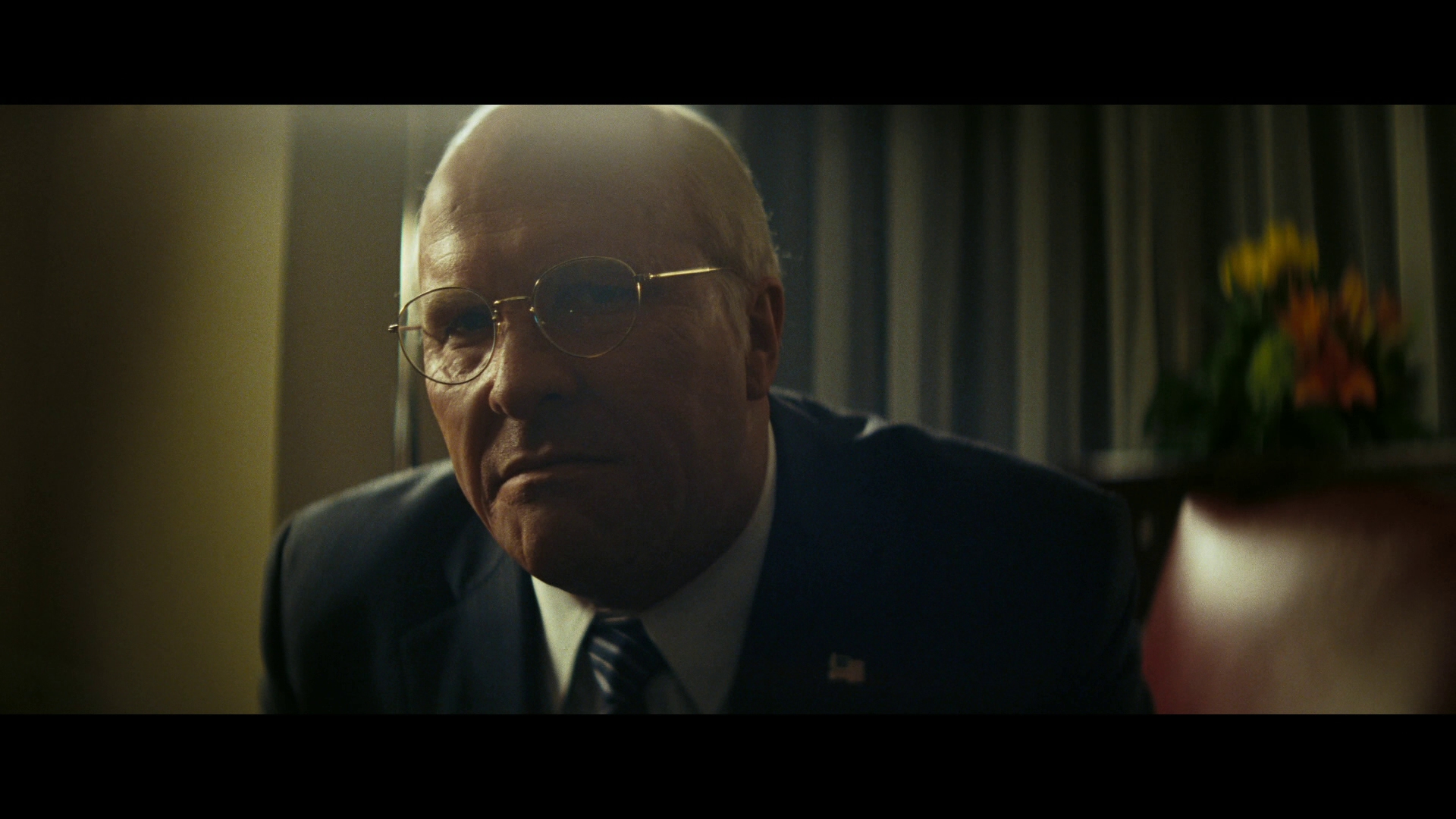 Using a full gamut of film stocks from 8mm to 35mm, the transfer of Vice to Blu-ray isn’t without its issues. Specifically, the earlier scenes utilizing 16mm suffer from heavy compression. This reduces significant definition in medium shots, leaving them flat and hazy. Some of this comes from digital smoothing, intentional as to make Bale and company look younger. The rest though, that’s on the encode.

Fox’s work does handle 35mm stock better, if still a little on the noisy side. At least fidelity can escape, with pronounced facial detail in close and some stellar sights of Washington landmarks. Exteriors perform admirably. Finished at 4K, the Blu-ray presentation looks it, although why Fox skipped a UHD release is unclear.

Shot with an eye for heavy light and deep, rich contrast, Vice creates great dimension throughout. Silhouetted cinematography isn’t shy about black levels. Brightness sustains its presence, filtering into the Oval Office or command rooms. This lifts Vice up, where the primarily drained palette relies on blues and occasional amber tones.

Obviously a film containing wide swatches of dialog, don’t count out Vice entirely in terms of its sonic capabilities. Bombing runs blast the low-end and make their presence known a few times. A war sequence sends bullets across the soundstage, with additional explosions. A scene of an Iraq family in one of the bombing zones is terrifying in its range.

Ambiance rises when at parties. Another moment sends a variety of voices around the soundfield, swirling in a 360 degree pattern. This all stays in balance, an excellent bit of mixing for a movie of this type.

Three long deleted scenes – including an absolute must see that can’t be spoiled – run 17-minutes total. There’s a featurette on a deleted scene called The Music of Power. That runs five minutes. The main making of runs 35-minutes, and like the movie, is not afraid to lash out at Vice’s target. It’s a strong complement to the main feature.

Vice shows no fear in breaking down the absurdity of George Bush Jr.’s administration, notably Dick Cheney’s ability to do everything he wanted.

The 15 unaltered images below represent the Blu-ray. For an additional 27 Vice screenshots, early access to all screens (plus the 20,000+ already in our library), 75+ exclusive 4K UHD reviews, and more, support us on Patreon.