Bumblebee’s success is easy to chart. For one, it’s less than two hours rather than the tiring, overlong mainline films in the Transformers series. And second, it’s self-mocking. Former pro-wrestler John Cena, with the look of a real-life G.I. Joe figure, sits in front of a Ronald Reagan portrait, cocks a pistol, and says flatly, “We’re going to Texas.” Welcome to a pure red state, Captain Cena.

Those five Transformers films primarily played to grating hyper-patriotism and pro-military proclivity. Bumblebee casts Cena, using his muscle for a brick house-like silhouette while staging stand-offs between robots and tank corps, but treating the circumstance with the absurdity this deserves. The military allows alien robots into top secret rooms, with Cena fervently pointing out the name “Decepticons,” because incompetent top brass don’t see the concern. Of course, this all happens because the government sees a chance to win the Cold War against Russia.

It fits. Bumblebee is a 1:1 copy of ‘80s cinema, dashes of E.T. and Harry and the Hendersons – all of those kids-meet-alien/monster movies – so may as well invoke the Cold War too. At the center, Hailee Steinfeld, playing another gadget gal who works on cars as is the Transformer norm, but without the warped sexism Transformers took from Megan Fox; Steinfeld doesn’t straddle a motorcycle in short shorts. She bonds with newfound friend Bumblebee. Since she lost her father, Bumblebee becomes an awkward parent. Terminator 2, basically, with less violence.

Bumblebee stands alone – proudly so – without pushing toward sequel bait

Surprises don’t filter in. Bumblebee’s generic qualities cause its roots to surface; there’s no hiding the ‘80s nostalgia. There’s even a Rick Roll here. It’s Steinfeld giving the situation heart. Although born of the Disney drama method of killing off a parent, the obnoxious step dad decides to erroneously treat her depression. He buys her a book on smiling. It’ll make her happier. People will like her more. That’s double duty, playing into the sexism of “smile more” anecdotes and treating a mental condition as if a simple solution exists.

Plenty of action is still embedded here. However, Bumblebee isn’t as fluent in the ways of Michael Bay. That’s for the better. This is the first Transformers to breathe and build a character chiseled from reality rather than rock. When the explosions do come, they have purpose when letting loose with derivative comic book-like brawling. As Cena salutes the real hero in the story, everyone finishes their arcs and without red state ideals. Bumblebee stands alone – proudly so – without pushing toward sequel bait (even if one is probably inevitable). This kinder, gentler Transformers is the way forward, celebrating the magic of the toy line without the sharp edges of the bellicose main series. 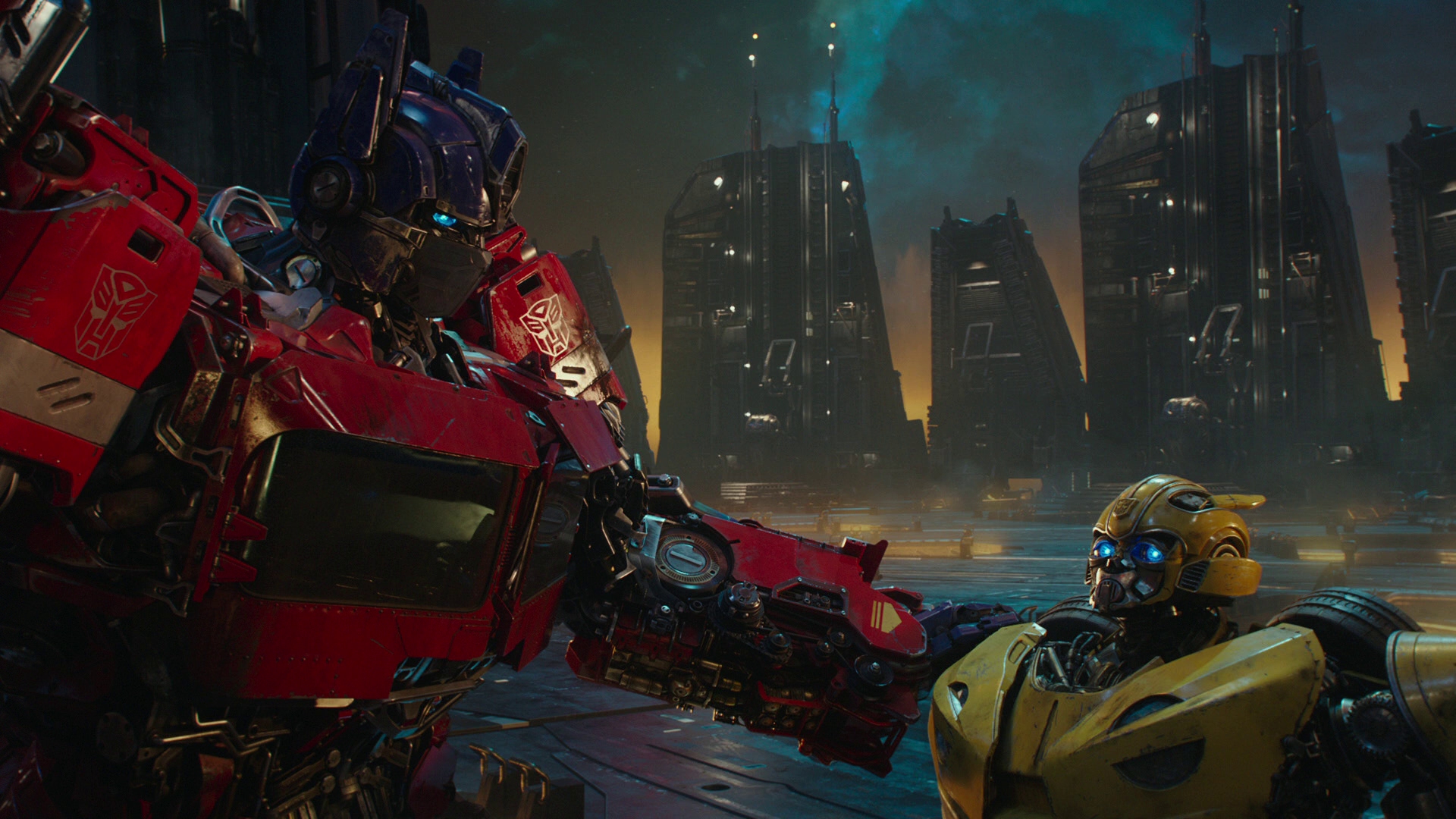 Shot digitally with a mild, added grain filter to cement the ‘80s aesthetic, Bumblebee comes to UHD from a 2K upscale. It’s routinely gorgeous. Post-production this time does not add the hyper contrast notable in this series. Bumblebee lacks the pumped up style, more natural with the occasional lapse of black levels.

Not much is lost though. A Dolby Vision pass energizes the various Transformer tech, from holograms to energy beams. Sunsets on the west coast push beautiful, intense brightness. Cars shimmer with an appropriately waxy gloss.

Even at 2K, definition delivers. Close-ups resolve high-frequency facial detail. CG work displays the minutiae evident in the effects; there’s no aliasing here. Although a handful of seconds-long shots looks like pick-ups shot on a cell phone (less than 10 seconds total), the rest is impeccable stuff. Sharpness stays high, with superb, consistent resolution.

In comparison, the 1080p disc holds up. The digital grain is slightly coarser leading to rare moments of visible noise/compression. That’s minor. Some banding on night skies intrudes, but again, mildly at worst.

Ridiculously good dynamic range easily matches up to the other Transformer films on UHD/Blu-ray. The Atmos mix isn’t afforded as much action as before, but every scene is given the same delicate touch. Booming LFE never lets go, powerful and intense. Explosions shake rooms and the subwoofer support brings scale when Transformers stomp around.

Positionals lose nothing in the mix. Balance makes sure to keep the smallest pieces of debris fluttering around the soundstage. At one point, Deceptions circle Bumblebee, their voices trailing around to the rears in a perfect swivel. Pans sweep about with sublime accuracy, important given the number of cars, helicopters, and other vehicles that pass the screen.

There’s a decent amount of stuff here, but jump right to the outtakes. Here, John Cena improvs, intercut with finished scenes, and for nine minutes, it’s absolute comedy gold. It’s the best part of this disc.

Afterward, run through the nine deleted/extended scenes that run 19-minutes. Cue up “Bee Vision” to spot the various Transformers who show up in the opening Cybertron brawl. Slip the two dorky Sector 7 promos. Bringing Bumblebee to the Big Screen details the process of making this one, discussing the production as well as the franchise. It’s better than most these days. A low bar, but applicable.

Trouncing the other Transformers films in entertainment value, the admittedly safe Bumblebee has the entertaining (and nostalgic) goods.

The 15 unaltered images below represent the Blu-ray. For an additional 33 Bumblebee screenshots, early access to all screens (plus the 20,000+ already in our library), 75+ exclusive 4K UHD reviews, and more, support us on Patreon.