Or He Wrecks It – Either Way…

While browsing the internet – literally walking through it as if a shopping mall – Ralph stumbles into the comment section. That’s a mistake. The flurry of negativity sets off his insecurity problems. He sees the internet’s realities, dropped to a PG, in a movie running away from those issues.

Nearly all of Ralph Breaks the Internet dumps reference after reference. The virtual camera flies over a visually arresting internet city. Skyscrapers pour on brands. Brands, brands, and brands. Google, Facebook, eBay and Pinterest sit among the most prominent; the latter two become key plot points. Ralph Breaks the Internet is a “Where’s Waldo” puzzle, necessitating a rewatch to pick out not only the lingering videogame touches, but websites too.

As it is, the majority of these sights (or sites?) sit around. They exist as hollow comedy, even nostalgia as Ralph (John C. Reily) digs in an area near the landfill of Geocities. Ralph Breaks the Internet is a movie for kids, but wastes this platform to say nothing of the web’s dangerous side. The younger set needs that exposure. Ralph Breaks the Internet makes it all look glowing and attractive.

Ralph Breaks the Internet is adrift, on the hunt for substance

That leaves the relationship with burly Ralph and pitchy Vanellope (Sarah Silverman) as the centerpiece. Ralph is content in life, Vanellope is not. They duel among themselves, balancing emotions and needs, finally delivering a story of how friendship grows even when two people find their lives separating. That’s charming, and these two characters serve that narrative given their differing… everything. One’s old, one’s young. One’s enormous, one’s tiny. Togetherness, even in diversity, is a powerful message.

By broadening the pop culture reigns, Disney enacts their own lure. Using their Disney Princess line brings Vanellope into their club. There’s Star Wars of course, with a group of Stormtroopers chasing her down while the Imperial March plays. But again, this is referencing things for the sake of reference. Nothing connects. Ralph Breaks the Internet is adrift, on the hunt for substance, but runs aground before any discoveries.

When at its best, Ralph Breaks the Internet makes for fine background viewing. Trying to focus on the story will likely (and ironically) lead to some social media browsing. There’s plenty of color as a distraction and the myriad of things to blankly see is overwhelming. It’s one of those where repeat viewings inevitably find something new, something to glance at, but never a thing of consequence. 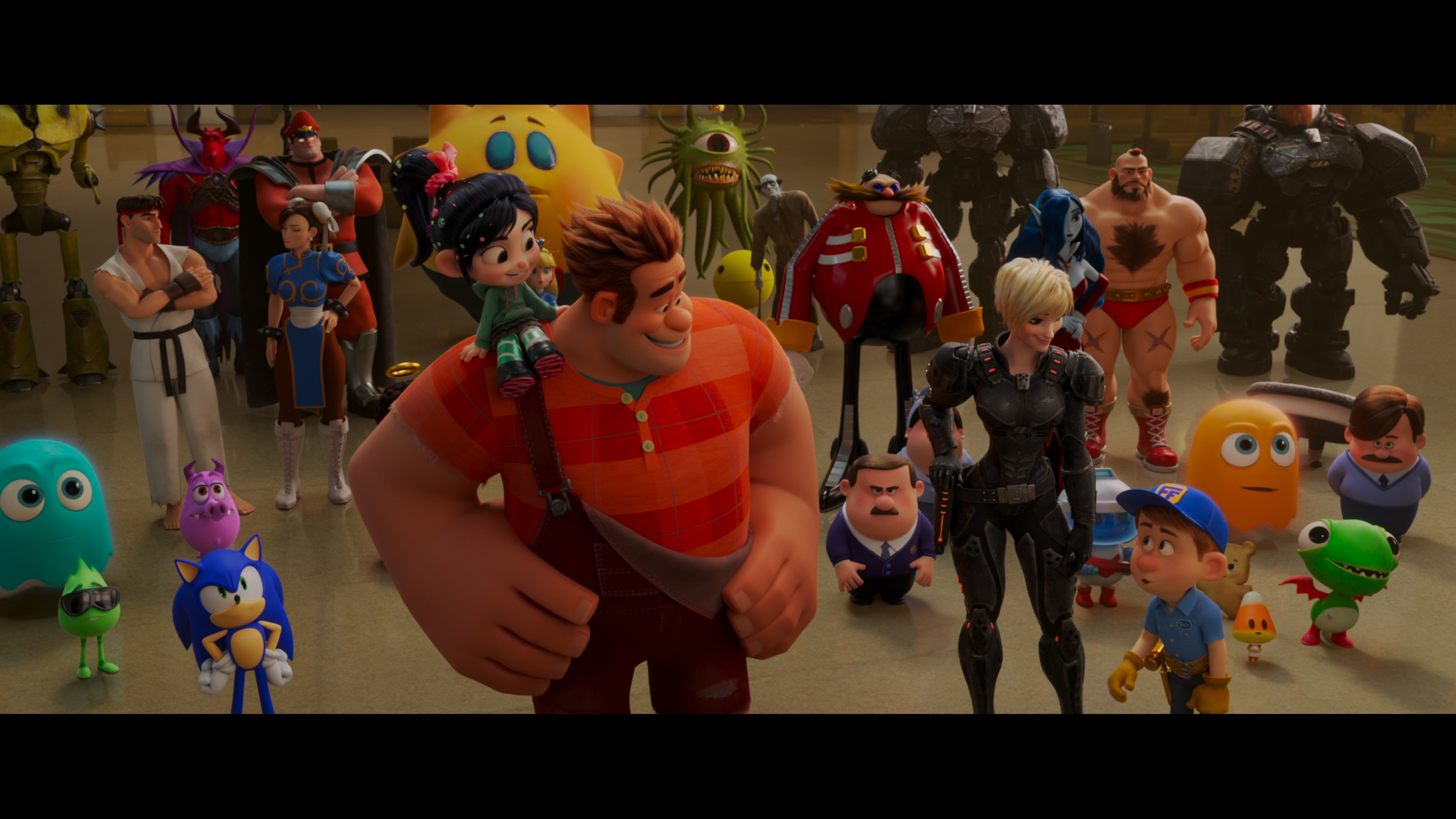 Disney goes the HDR route for the home release. Theatrical viewers (where applicable) saw this paired with Dolby Vision. Who knows any changes in the end results, but Ralph Breaks the Internet still offers pop. The best comes as a rogue virus is unleashed on the web. Its powers spread dazzling intensity as the attack commences, pushing the full range of this format.

The rest uses the tech well. Depth in black levels give imagery weight. There’s a scene where Vanellope and Ralph meet at night in Ralph’s game; that night sky moves from pure black to appealing deep blues flawlessly. Super saturated colors produce variety, from the pink pop of Sugar Rush to the polluted yellows of a new racing game. Each palette is gorgeous in their own methods.

In terms of resolution, Ralph Breaks the Internet’s best stuff comes from the wide shots of an active internet. From the specks of light representing data to the sites themselves represented as skyscrapers, those images push total splendor. Animation quality creates some strong texture, from hair to Ralph’s flannel. Those qualities never wane.

While Ralph Breaks the Internet doesn’t have the consistent heft of some other recent animated offerings on UHD (The Grinch, notably) but at its peak, easily matches up.

Disney breaks out the Atmos, and like the unfortunate expectation from the studio, this mix runs a little low. Bump up the volume to reach adequate LFE support. Some thumps from overturned cars and a collapsing building bring the needed punch. So do the rolling gumballs in Sugar Rush. Those isolated occurrences balance things out, enough to sell the available range.

Better though is surround use. That’s superb. Entering the router, Ralph and Vanellope begin shouting with their voices echoing around the soundstage. That’s fun. Plenty of panning is available, stretching things to the rears aggressively. All action scenes make aural gifts.

Of special note is how willingly Ralph Breaks the Internet spreads voices across the front soundstage. Few go this far. Listen as Vanellope visits with the other Princesses – all of their dialog jumps out from the center where needed and into the stereos with clean separation.

How We Broke the Internet is the key making-of here, split into 10 parts and running for 33-minutes. It’s fun and cheery, definitely light on depth, but a match for the movie. A look into the music’s recording session runs 10-minutes, exploring the approaching to scoring a tech-focused story.

A short featurette looks at some of the easter eggs hidden inside the scenery. A short look at some cat videos made for the background, five deleted scenes, and music videos clean up the Blu-ray. Note the UHD holds no bonuses.

Ralph Breaks the Internet, that much is true, but does so in a small, even shallow animated effort focused on references over substance.

The following six screen shots serve as samples for our Patreon-exclusive set of 52 full 4K screen shots grabbed directly from the UHD: