When Sonny Chiba is thrown from a third story window, lands on a car, and casually walks away, it’s certain Return of the Street Fighter isn’t a plausible movie. When someone’s eyes pop out of their head after a strike to the neck, it’s officially a dark comedy.

Embracing and celebrating grindhouse’s tone, the second in the Street Fighter series meanders. Too many katas bring the story to a stall and flashbacks to the first Chiba-starring entry further pad thing out. Return of Street Fighter only runs 82-minutes. Conservatively, around 10 of those do nothing and go nowhere.

So it’s flawed. Return of Street Fighter still knows its audience, hungry for exaggerated bloodshed. And, it’s aware and fearful. In the opening scene, Chiba (still a brutal anti-hero) hunts for a profitable bounty in a local police station. To get in, he busts up cops, rendering them useless for the rest of this story. From here, an investigation into a corrupt business plan is handled by local karate schools. Old school justice, because in the ’70s, Japanese police lost control to rising crime.

Return of the Street Fighter is pure joy once things get moving, an essential bit of cinematic grime

Chiba’s Takuma comes from Okinawa, a small island rich in tradition and oppressed by Japanese mainlanders. He’s an outsider by birth. Return of Street Fighter brings about an Okinawan savior, with Takuma chopping at the western influences seeking to exploit martial arts tradition for profits. He’s there for preserving heritage and a moral war. It’s intriguing, even anti-immigrant.

Return of Street Fighter features a number of shootings, outlandish in their style, if harrowing for a country with such limited gun violence. Comically, in a dash of self-awareness, Return of Street Fighter suggests itself as part of the problem. A mafia goon sits in a theater watching a grimly violent movie depicting a mass shooting in the Japanese streets. He leaves and while trying to protect a gold statue, ends up gunning people down in a similar outburst. If there is a gun problem in Japan, it’s those seedy cinemas attracting the worst kind of people in a down economy of that time. At least, that’s history according to Return of the Street Fighter.

Still, there’s plenty of off-setting goofiness. The gore is ludicrous. Takuma shreds the vocal cords of one poor sucker. Another goes down from a chop to the skull, unleashing an arterial spray. Return of Street Fighter doesn’t forget its surreal roots either. There’s a returning character from the first film now fitted with an electronic voice box, a bit part for a mute hippie, and Takuma’s own flower child sidekick who trails him like a cult member. It’s pure joy once things get moving, an essential bit of cinematic grime. 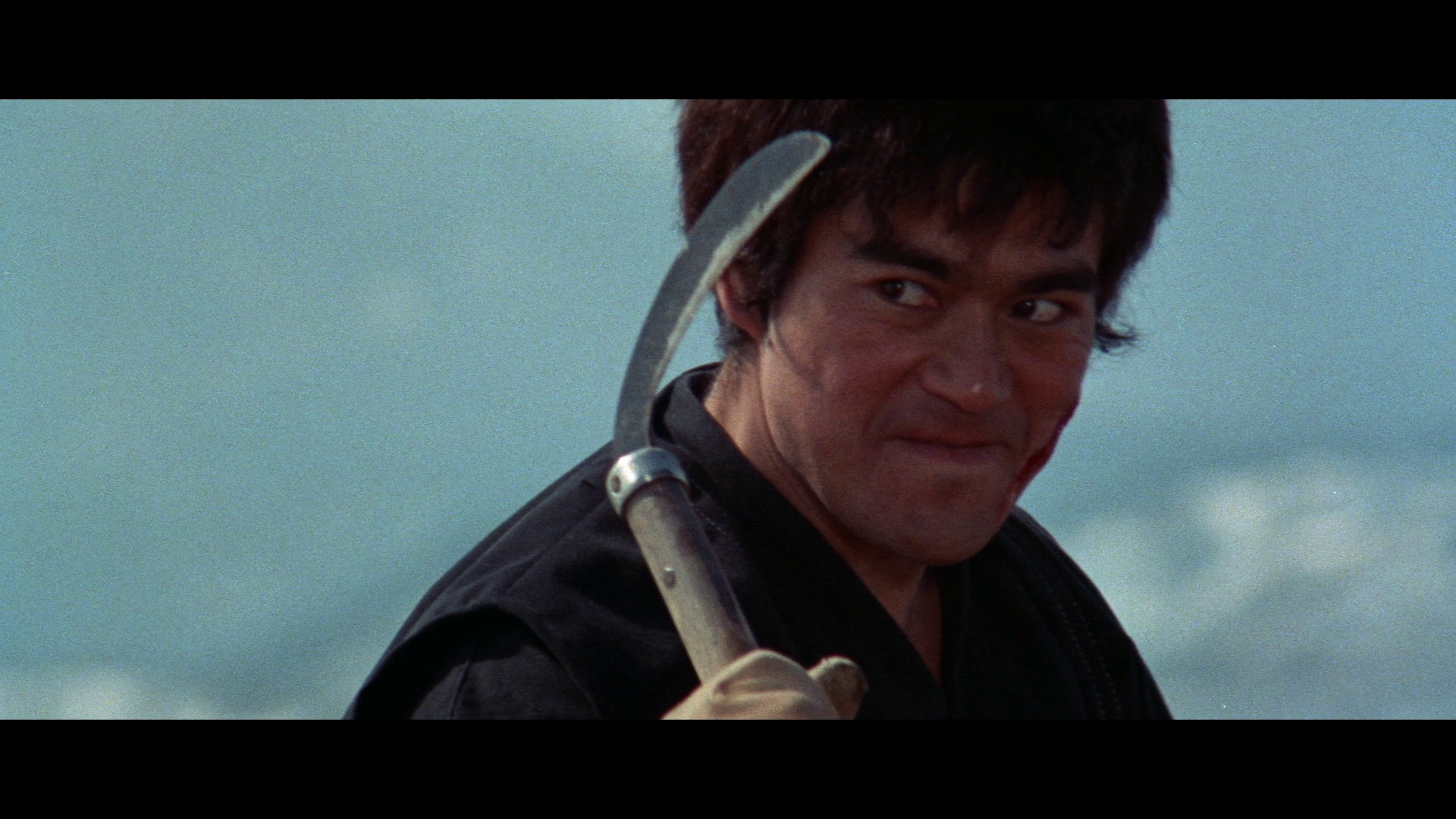 Shout debuts a new 2K scan here, pulled from two different sources. It appears a few scenes of violence and nudity were restored from lesser elements. Heavier grain and significant crush in those moments suggests so.

Otherwise, this is great material, with a little leniency afforded to the finale. That takes place in a building without power, leaving things murky with a smearing grain structure. Given its own disc in this collection, Return of Street Fighter otherwise handles grit with ease. It’s a great replication of film stock on a digital medium. Minimal damage and dirt keep things authentic.

The winner of this output is detail though. That 2K scan makes full use of available resolution, creating precise and pure texture. Facial definition stands out when in close. Fidelity never wanes unless the source material dictates by way of soft focus.

Both Japanese and English tracks come in DTS-HD mono. Note subtitles on the Japanese mix match those on the English dub. This isn’t a translation, rather dubtitles.

There’s an interesting trade between these two tracks. On the English side, dialog dominates, raised as dubs typically are. Scratchiness matches the era and budget. Music and sound effects dim, at times crushed to a point of being obliterated.

In the original Japanese, dialog rests naturally within the audio, less pronounced. The music and effects then take prominence, if with limiting fidelity. Treble strains while bass hardly exists.

Return of the Street Fighter

Sonny Chiba is back in Return of the Street Fighter, a padded sequel but with plenty of cultural staying power as a grindhouse gem.

The 15 unaltered images below represent the Blu-ray. For an additional 21 Return of the Street Fighter screenshots, early access to all screens (plus the 20,000+ already in our library), 75+ exclusive 4K UHD reviews, and more, support us on Patreon.