The Body Snatcher conveys perfect ‘40s era wartime horror. It’s indirect, but morbid and unseemly, where actions matter and dialog hangs. Corrupt in intent, and gruesome, yet not visually, so not to bother censors. Plus, Boris Karloff’s and Bela Lugosi’s names stick on the marquee.

It’s a story of opportunity, where rich and poor collide in sickening trade. Karloff, the taxi driver moonlighting as a grave robber (and grave maker), and Henry Daniell, an egotistical doctor obsessed with teaching dissection. Body Snatcher deals in resentment; Karloff’s mocking attitude toward his wealthy superior is sublime, an enigmatic performance. And post-depression, a satisfying slap to the upper class.

That’s what Body Snatcher is, first horror, second a tale of gamesmanship between these two men and those they drag with them into this warped murder tale. Although from RKO and not Universal, Body Snatcher has that ferocious Universal anti-science slant. Though small, there’s a spiritual element too, where guilt merges with fear all during a torrential thunderstorm to make for a grand, classical climax. God wins. Corrupt men don’t.

A good man does exist in Body Snatcher. Russell Wade seems wholly out of place as a gentle, empathetic medical student, determined to help a small crippled child. He’s the only hero, the one who doesn’t speak of greed. Daniell’s on-screen wife (Edith Atwater) doesn’t say a word about her husband’s operation while the shy assistant Bela Lugosi eventually takes what he learns, trying to cash in rather than expose the grim criminality around the school.

Set in the mid-1800s and lit by candlelight, it’s possible to measure Body Snatcher by its thematic as well as literal darkness. Shadows loom, where a man digging a grave approaches the site, visible only by way of his silhouette on the surrounding wall. Then he kills a dog, because Body Snatcher adores cruelty. Another kill involves the slow movement of a carriage into a hazy rain, disappearing into blackness. A thud. Some singing stops. The deed is done, all off-screen, and with a more uncomfortable chill than any beheading from Jason Vorhees.

The movie’s success comes down to Karloff and Daniell, repelling off one another, each disgusted by the other, but remaining acquaintances out of necessity. Daniell turns wide-eyed at the thought of human dissection; Karloff does so at the thought of creating another corpse. How lurid a relationship these two share. Such a partnership cannot last, of course. Otherwise, there’s no movie. Things turn from beneficial to an openly abrasive exchanges of words – genius in their writing, engrossing in their action – and eventually, violence. The escalation is faultless. 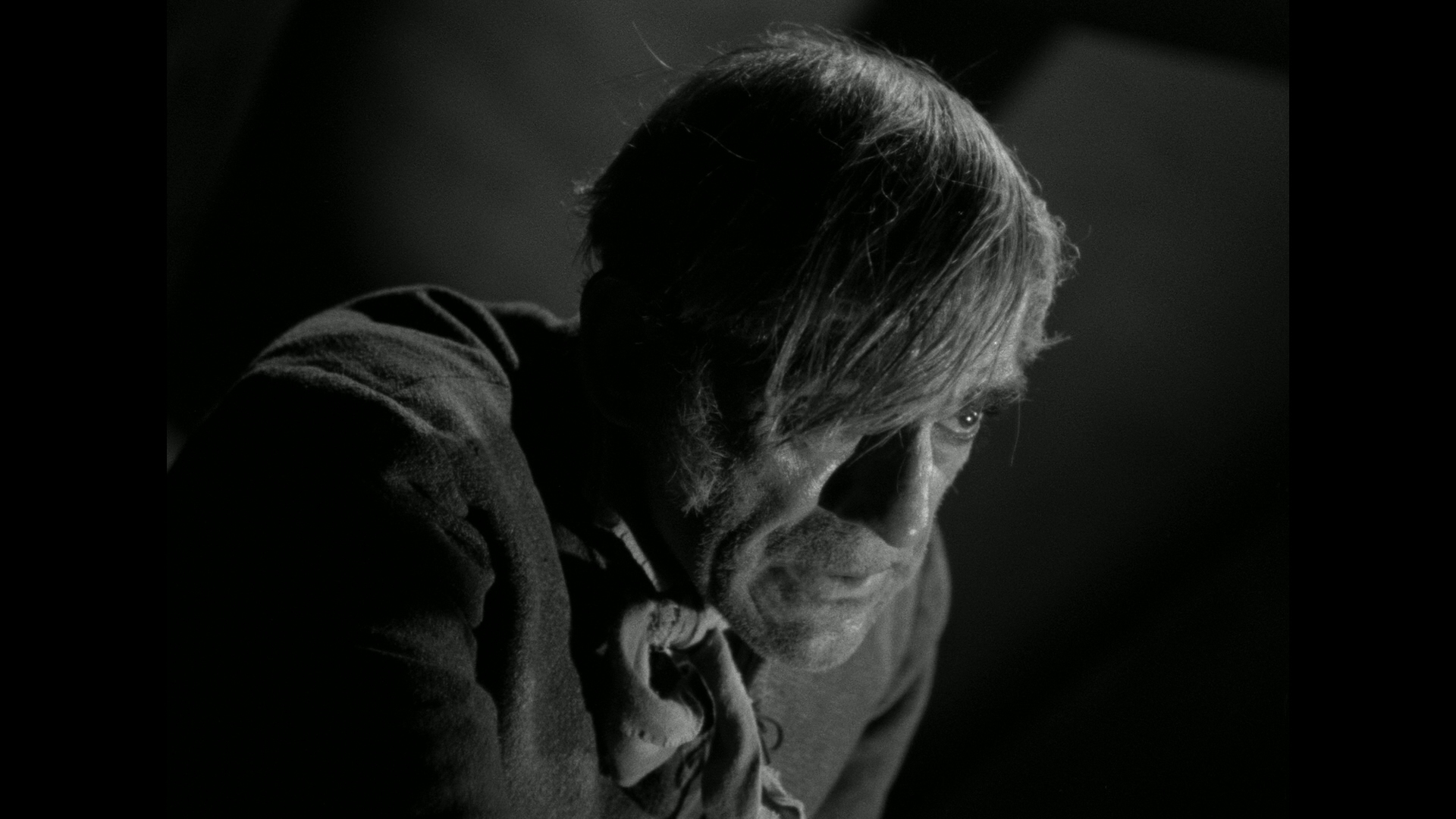 Shout delivers a new master for The Body Snatcher that easily bests some of Universal’s for their Monsters Blu-ray set. This is remarkable work, top-of-the-class stuff with outstanding resolution and definition. Sharpness pushes to the extreme edge of Blu-ray’s capabilities, using every bit of the 1080p format to extract textural qualities. Wool suits and other clothing display dazzling fidelity. Even close-ups, unusual for the day, find material to process.

A fine grain lays over the image, impeccably resolved with strong parameters. The source print looks unvarnished, with minimal specks and dirt, just enough to confirm this is an authentic film source; it looks pristine enough to convince otherwise. At no point does The Body Snatcher look its age.

Pair this with exquisite gray scale, deep shadows, and vivid contrast to create a perfect replication of the original film stock – and undoubtedly better than any projection prior. Depth adds menace to the creepier scenes of Karloff staring down Legosi, or those set at night and demanding packed shadows. Lighter sequences lose none of the depth, still rich in dimension.

Aside from a few instances of static and popping – and those add to the vintage flavor – this is equally perfect audio. Formed in DTS-HD, the mono mix struggles not with the orchestration. Highs exhibit purity, and stability in the lows, like the video, defy age.

Body Snatcher’s analog quality is warming to the ears, with vintage recording aesthetics prominent and clarity flawless. A few pops and crackles is fair trade to achieve something this pure.

A new video essay produced by Shout titled You’ll Never Get Rid of Me runs 12-minutes, examining Body Snatcher’s classic status. A commentary track brings in historian Steve Haberman to discuss the film, along with director Robert Wise. The latter is ported from the DVD release.

An older documentary charts the path of famed horror producer Val Lewton, running 53-minutes. If this isn’t familiar already, then it’s an informative and glossy look back at a career sadly cut short. Posters, lobby cards, and production still galleries round out the disc.

Boris Karloff and Bela Lugosi pair for the final time on-screen in the grisly horror of The Body Snatcher, a duel of words – and bodies.

The 15 unaltered images below represent the Blu-ray. For an additional 19 Body Snatcher screenshots, early access to all screens (plus the 20,000+ already in our library), 75+ exclusive 4K UHD reviews, and more, support us on Patreon.