Moving fast enough to at times appear like an 80-minute fight montage, Sister Street Fighter’s first sequel use as much delirium as its predecessor. Diamond thieves lure the returning star Etsuko Shiomi into the fray in this round. They won’t last long.

Hanging by a Thread uses the old cinema standby of jewel heists, although there’s more to it. Where Sister Street Fighter dealt with a real world outbreak of drug abuse in ‘70s Japan, here it’s human trafficking. When Japan’s post-war bubble burst at decade’s start, immigrants from surrounding countries found themselves lost economically, lured into the sex trade by the promise of financial security. So it’s suggested by Hanging by a Thread, where Shiomi’s sister puts up a front as a jewelry store clerk, when in reality she satisfies her sex-starved boss.

All that’s too real for Hanging by a Thread. There’s a twist in this formula, encapsulating the voraciousness of Japanese kung-fu – but with a kitschy kink. Villains smuggle their wares in women’s cheeks. Not those cheeks; those cheeks. A mad doctor recovers the illicit goods via gory surgery. And not any doctor, but one who wanders the halls with a parrot on his shoulder. Martial arts cinema is a magically bizarre place.

Hanging by a Thread performs what it purports to fight

The mix of camp quirk and blood-squirting violence is a definite series signature. Hanging by a Thread uses another draw though: Two outstanding fight sequences that come too early, subduing the spectacle of the eventual finale. One happens during a typhoon, the torrential rain and wind creating tension missing in Hanging by a Thread’s other brawls. Then, a scrap on top of a moving train, complete with real ninjas bouncing around in that notable black garb. Those scenes elevate the slap dash, quick turn-around of this sequel, released the same year as Sister Street Fighter.

Sister Street Fighter’s anger is held over, produced with a cynical view of a now industrialized country. Everyone is out to kill or maim each other. Scenes set up in strip clubs, Hanging by a Thread willing to exploit the decade’s dwindling theatrical market with plenty of nudity.

To note, a picture of a nude underage girl hangs on a wall in the villain’s office. How that remains in the print legally (or morally) is anyone’s guess. Worse, it sits for some 30 seconds as a clearly focused part of the background. That’s reprehensible. Shame on Arrow for leaving that in.

For a movie concerned about sexual exploitation, Hanging by a Thread performs what it purports to fight. It’s hard to find the surrealism digestible knowing there’s an unforgivable story behind that image. 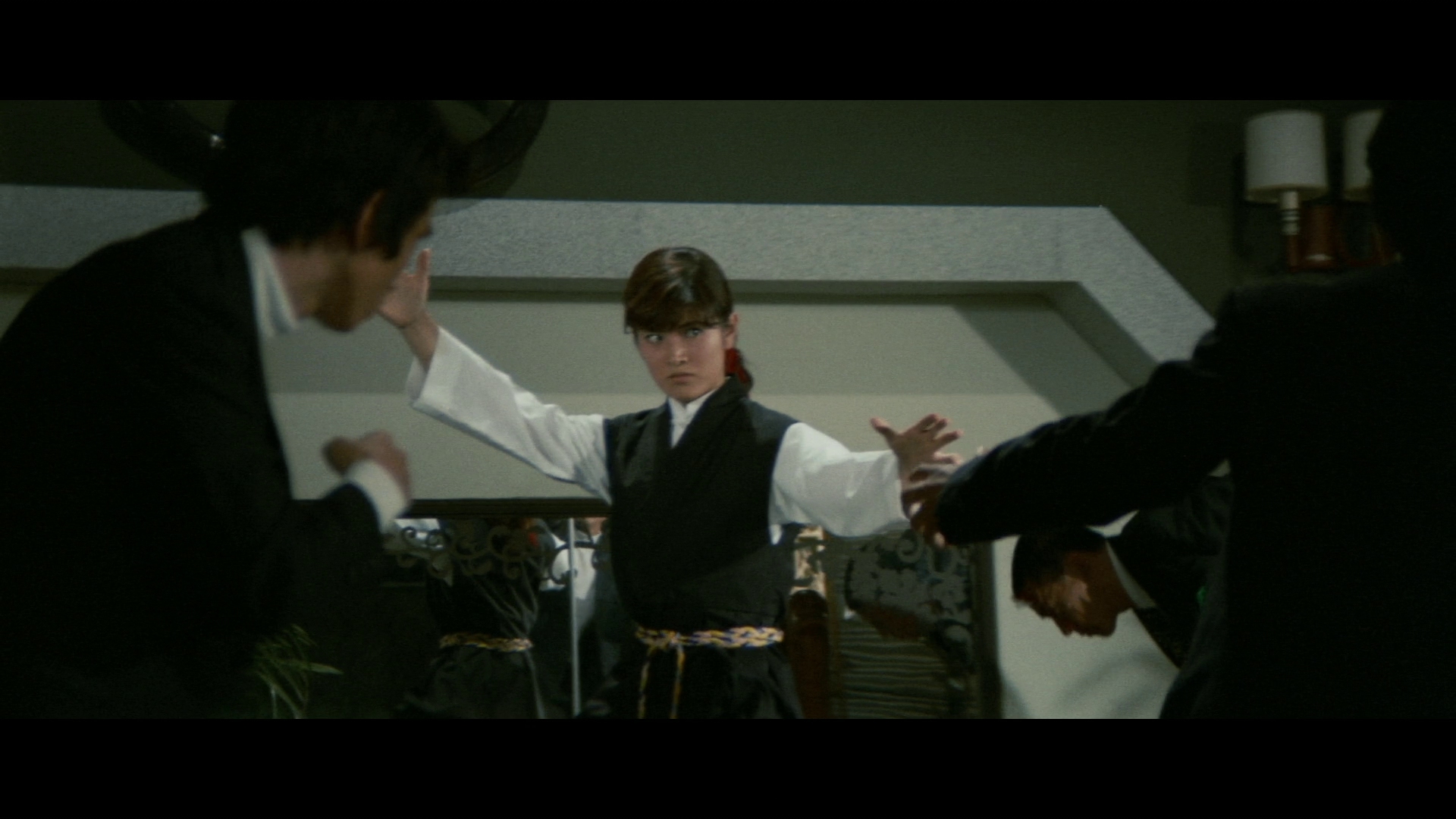 With sterling contrast adding some needed depth after the flattened presentation of Sister Street Fighter, Arrow’s transfer for this sequel finds awesome life. Pristine brightness marries deep, solid black levels, enough to give Hanging by a Thread the sheen of a more modern film.

Sharpness gets an uptick too, with better resolution and natural grain. Encoding doesn’t cause problems, allowing significant detail behind the film structure. Facial texture and environments pour on definition. The limited damage on the print (most contained to the first few minutes with burned-in Japanese subtitle cards) keeps things superbly clean.

Along with this brightness and clarity comes a splash of color. This isn’t only because of the elaborate blood letting. Other primaries work in, especially with Shiomi’s dress. Her costumes have flair. Gold trim and teal sleeves display plenty of energy. Saturation never goes too far.

Note Hanging by a Thread is combined on a disc with the two following sequels, making this an all-the-more impressive encoding job.

The loss comes in terms of audio, where the dialog hisses from an overall quiet PCM mono track. No dub is offered, and the original Japanese is consistently aged for the worse.

Thin dynamics leave the score akin to mud, if not completely lost than on the verge of being so. Highs screech, drained of life. There’s no bass to speak of, jumbled together in the mass of sound.

Twenty minutes of an isolated score sounds fantastic (in PCM as well), and as the lone extra, it needs to.

Sister Street Fighter’s first sequel Hanging by a Thread is every bit as colorful, weird, and wild as the first, if with one uncomfortable caveat.

The 15 unaltered images below represent the Blu-ray. For an additional 26 Hanging by a Thread screenshots, early access to all screens (plus the 20,000+ already in our library), 75+ exclusive 4K UHD reviews, and more, support us on Patreon.