Nominated for Best Picture and Best Screenplay in 1994, director Mike Newell’s Four Weddings and a Funeral is a crowd-pleasing romantic comedy that has aged like fine wine.

Thanks to a stellar ensemble cast and effervescent performances by leads Hugh Grant and Andie MacDowell, the British movie perfectly encapsulates everything audiences want from a charming and lovable rom com. Funny, sexy and sophisticated, the engaging screenplay is a real delight. Hugh Grant’s boyish charm here made him a movie star with a performance that exudes charisma.

Establishing himself as a screenwriter to be reckoned with, Richard Curtis’s screenplay is a marvelously acerbic British comedy of manners. It follows a group of single friends as they attend four weddings, struggling along the way to meet their own romantic matches. Shy Brit Charlie (Hugh Grant) meets an American woman named Carrie (Andie MacDowell) at a friend’s wedding and immediately grows infatuated with her.

…a staple romantic comedy that has stood the test of time.

Always a best man and never the groom, Charlie will meet Carrie again and again at a series of festive weddings. Their path to happiness has many unexpected bumps along the way as fate conspires to keep them separated.

The hilarious supporting cast includes Kristin Scott Thomas (The English Patient) and Rowan Atkinson (Bean). The ensemble are having their own brand of fun at each of the weddings. It is delicious fun seeing their antics as they witness friends and family making fools of themselves. Icy Fiona (Kristin Scott Thomas) plays the detached friend above the fray. Charlie’s friends have their own relationship issues which play out in wickedly funny ways.

Beyond the sparkling dialogue and witty comedy, it is Hugh Grant’s easygoing charm as the reserved and very likable Charlie that sells Four Weddings and a Funeral. His chemistry with MacDowell is palpable, even if MacDowell herself feels like an outsider in this otherwise all-British cast. MacDowell was one of the more appealing leading ladies in the 1990s and it’s easy to understand why Charlie is so infatuated with her Carrie.

Nominated for multiple Oscars, Four Weddings and a Funeral is a staple romantic comedy that has stood the test of time. Only a strong aversion to English humor is any reason to dodge it. 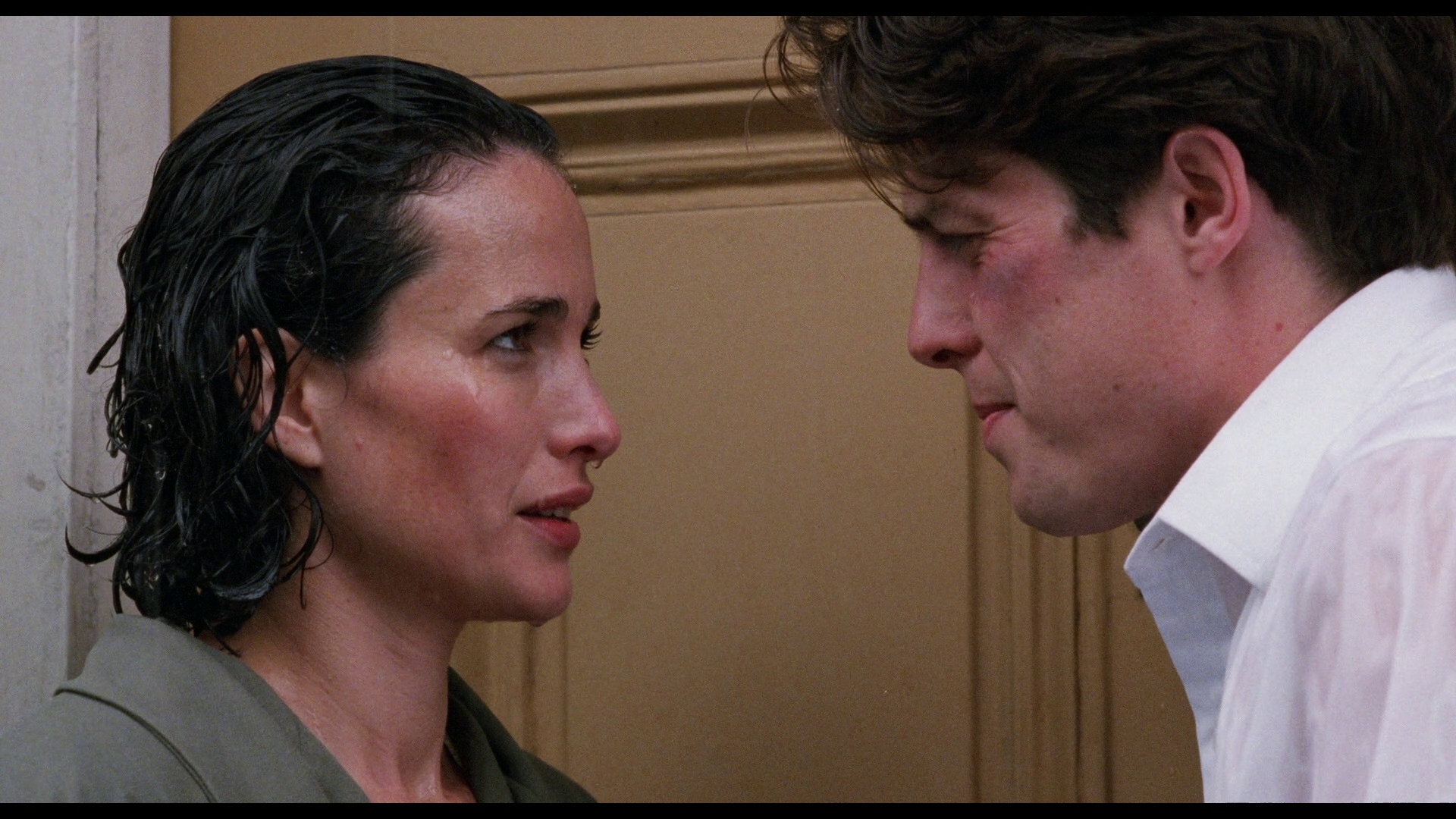 Compared to the ancient MGM Blu-ray, this 1.85:1 presentation has a tighter contrast and more saturation. The soft cinematography doesn’t really exude definition and detail. Employing optical mattes for the burnt-in subtitles, a layer of fine debris and dirt particles are noticeable for keen observers. Those sections of the movie have inferior picture quality compared to the better scenes.

The 117-minute main feature receives a strong AVC encode on a BD-50. The 1080P video offers subtle but definite improvements in the picture quality over the prior BD. The low-budget British movie likely couldn’t look much better unless a major restoration was done to reconstruct the film elements without the optical matte elements. This new film scan doesn’t provide the dramatic PQ improvement seen in Shout’s other recent MGM-licensed Blu-ray, When Harry Met Sally.

Newell’s film is a dialogue-driven romantic comedy with little in the way of audio dynamite. The front soundstage dominates the 5.1 DTS-HD MA audio, with little isolated action going on in the rear surrounds. Some mild ambient moments slip into the rears during the wedding celebrations.

It’s fairly pedestrian audio with a sparse score, only a few notable pop songs change things up. A couple of odd sound errors may have been introduced into the surround mix with this new Blu-ray. One scene in particular has an oddly out of phase effect that introduces some echo.

Dialogue is clean and intelligible, even during crowd scenes. This is serviceable audio but don’t expect an elaborate, engaging surround mix.

If foreign-language dubs and multiple subtitle options are needed, go with the MGM BD. That disc had a plethora of options, while Shout’s disc only offers English SDH subtitles. They appear in a white font. A secondary 2.0 DTS-HD MA soundtrack in stereo is also included that largely mimics the surround audio. Purists should gravitate to the original theatrical audio found in this stereo presentation.

Shout Factory brings one new featurette to the table for this underwhelming Shout Select (#63) release. The remaining special features have been ported over from the 2004 deluxe DVD edition put out by MGM. If you own that DVD, or the 2011 Blu-ray, nothing will be new to you on this edition, other than the new interview with the movie’s cinematographer.

A slipcover is available. Reversible cover art is an option.

The Wedding Photographer (26:31 in HD) – This new interview with Four Weddings’ cinematographer Michael Coulter delves into his work process on the film. Coulter discusses the nuts-and-bolts of being a cinematographer on a large project like this made on a tight budget. Filming site locations and his memories of working with director Mike Newell are points of focus.

Audio Commentary by Director Mike Newell, Producer Duncan Kenworthy and Screenwriter Richard Curtis – Made for the 2004 DVD, this is an informative discussion about the film behind the scenes and generally entertaining.

The Wedding Planners (29:41 in SD) – A featurette with the cast and crew that goes behind the scenes. Made when good money was spent on creating supplements for DVD, it’s well worth watching.

Four Weddings And A Funeral…In The Making (07:34 in SD) – A vintage featurette made for the movie’s promotion back in 1994, it offers pithy interview clips with stars Grant and MacDowell as well as Newell.

Two Actors and a Director (05:33 in SD) – A forgettable featurette with Newell discussing the casting of Grant and MacDowell. The two stars discuss working together.

Full disclosure: This Blu-ray was provided to us by the studio for review. This has not affected DoBlu’s editorial process. For information on how we handle review material, please visit our about us page to learn more.

Four Weddings And A Funeral

Hugh Grant and Andie MacDowell headline this acclaimed rom com with a stellar cast and sparkling writing. It remains one of the genre’s most beloved and popular entries.

The 15 unaltered images below are taken from the Blu-ray itself. For an additional 31 Four Weddings And A Funeral screenshots in full 1080P resolution, early access to all screens (plus the 20,000+ already in our library), 75+ exclusive 4K UHD reviews, and more perks, support us on Patreon.