BINO: Blonde in Name Only

Legally Blonde’s opening credits pour the frothy pop of Hoku’s “Perfect Day,” cheery and corny in its early 2000’s pep. It’s the perfect soundtrack choice. Paired with Reese Witherspoon’s portrayal of perky Elle Woods, the two merge into one. Woods lives an existence where every day is perfect. Legally Blonde openly accepts its cornball, screwy worldview for all its worth.

Most of this serves as a shield to any semblance of reality. Legally Blonde may confront sexism and sexual harassment in the workplace, but does so with an odd vigor. This movie has energy for days. Woods is on fire throughout, beaming positivity as she ditches a fashion major for Harvard Law. And succeeds, of course.

This is a one joke movie – the seemingly ditzy California valley girl with a chihuahua in her purse doesn’t conform to the stereotypes. Years of comparisons to Clueless don’t fly. Woods’ smarts belie the expectation, shedding the hokey demeanor to prove her worth. That’s inspiring, with this outwardly dorky personality – played for gentle gags – working her way up a law firm’s ladder.

Legally Blonde devours the chance to elevate its fantasy

The movie itself is more of a typecast than Woods. There’s the bitchy girlfriend, the hopeless ex-boyfriend, the new romance, and a number of pedestrian challenges to overcome. Most important is the ability of Woods to still be herself. She never loses her fashion-obsessed charms, stepping into court without a briefcase, rather a neon-pink purse holding not documents, but her dog. Legally Blonde devours the chance to elevate its fantasy, and never shies away.

There’s something to consider: Much as it seems Woods comes at this challenge from a place of smarts, she’s also leading a privileged life. She lived with her parents in a mansion and never struggles to pay tuition all while dropping untold cash on dresses. Legally Blonde glosses over this, treating it as part of the fairy tale, bubblegum aesthetic, but in the process removes a critical hurdle. In this, Legally Blonde is too clean. Woods starts from a place in high society. There’s no loss if she fails, no stakes in her quitting, no fear if she drops out.

It’s easy to carry Woods’ optimism of the world when seeing it on a financial high. Legally Blonde doesn’t have reason to stress out its lead. Yet, there’s something appealing with how deep Witherspoon is willing to take this character. She rejects her cliché even while living it, and refuses to give up on Legally Blonde’s crudely drawn, predictable villains. There’s as much value in intelligence as there is in kindness. Sometimes, a public needs that type of messaging from its entertainment. 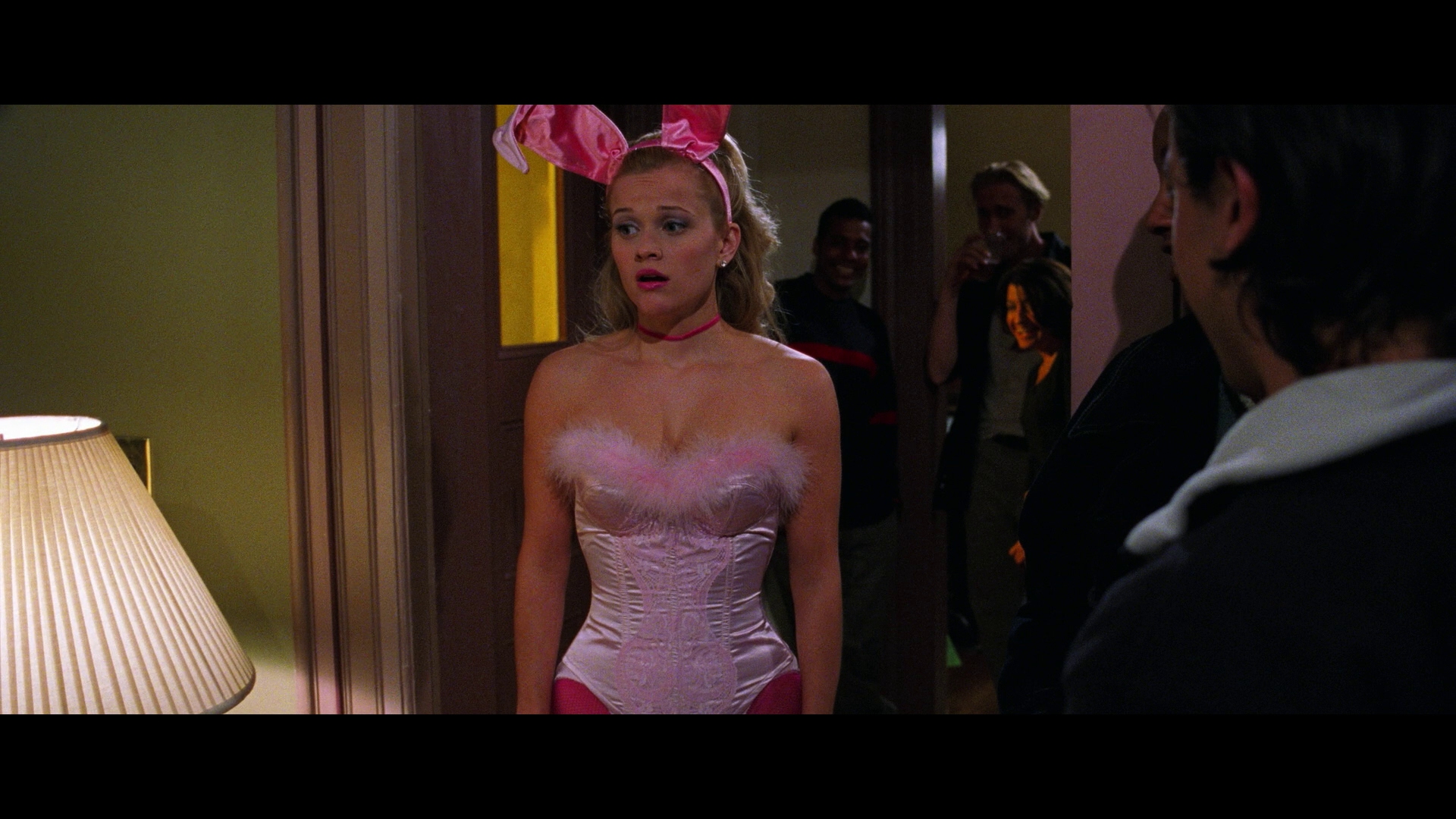 Shout debuts a stated 4K scan for this 2001 feature. For most of its runtime, the results of a modern scan stand out with exceptional quality. Sharpness and detail run high, pulling out extensive definition in the plain cinematography. Texture remains consistent, brilliant during a number of exteriors and close-ups.

Grain replication sees few roadbumps. Shout’s encode shows off excellent reproduction of the source film stock. That’s a challenge against Legally Blonde’s near blinding slate of color. Few movies can claim more vibrancy or saturation in pink than this one. That overdone quality is a necessity and part of Legally Blonde’s character. Without, it’s not the same movie. This release refuses to dull this blast of primaries.

If there’s an impediment, it’s mild damage. A few specks and scratches do appear, if without consistency. However, a few vertical scratches ghost their way onto screen with remnants of clean-up left behind. That will sour resolution in those few shots.

Bringing in a DTS-HD 5.1 (and DTS-HD stereo) mix doesn’t amount to much. Surrounds sit this one out, with the soundtrack providing a handful of chances for the LFE to do… something. Despite the parties and other crowded areas, ambiance stays low outside of the front soundstage.

Legally Blonde isn’t the type to test a home theater with though. Dialog matters, rendered cleanly and sharply by this mix. Despite a lack of movement, the track uses the center for everything it can, doing so flawlessly.

A new interview with Margot actress Jessica Cauffiel lets her speak about the part, how she got it, and the film as a whole. This runs 13-minutes. Other bonuses carry over from previous releases, including dual commentaries. One features Witherspoon, director Robert Luketic, and producer Marc Platt. Six of the crew join the second track.

Nine minutes worth of deleted scenes include an intro from Luketic. Inside Legally Blonde is the first of two featurettes, this one 21-minutes of fun that charts how the movie came to be. The Hair that Ate Hollywood follows, a nine-minute look at the bevy of, well, hair in this movie. A music video and trailers complete the port from prior releases.

Reese Witherspoon creates a memorable, stereotype-breaking character in Legally Blonde, even if she comes from a fortunate place.

The 15 unaltered images below represent the Blu-ray. For an additional 18 Legally Blonde screenshots, early access to all screens (plus the 20,000+ already in our library), 75+ exclusive 4K UHD reviews, and more, support us on Patreon.