Superman’s Return From the Dead?

Does Metropolis need Superman? Lex Luthor pushes his own solution in this satisfying superhero adventure that sees the Justice League taken out of the picture and an army of cybernetic minions roaming the city.

After the events seen in The Death of Superman, six months have passed and Metropolis still mourns its greatest hero. Reign of the Supermen picks up where that movie left off, continuing the latest installment of New 52-inspired animated movies released to home video by DC and WB Animation.

Reign of the Supermen is a sequel that adapts the popular comic book arc from the 1990s where no less than four different heroes emerge in the aftermath of Superman’s death, all wearing some form of Superman’s familiar costume. One even claims to be Superman himself.

Reign of the Supermen’s all-star voice cast is led by Jerry O’Connell, Rebecca Romijn (X-Men, The Librarians) and Rainn Wilson (The Office) as the voices of Superman, Lois Lane and Lex Luthor. In a great pick, Tony Todd (Candyman) voices the evil ruler of Apokolips, Darkseid.

Four would-be heroes claim Superman’s mantle in the wake of his death, jockeying for supremacy in Metropolis. You have Superboy, a youngish Superman clone fronted by Lex Luthor. Cyborg Superman, claiming to be the original Superman with fractured memories. A futuristic-looking Superman called the Eradicator, possibly from Krypton. And finally Steel, a mysterious hammer-wielding man in a suit of armor. Please, no Shaq jokes when you realize they attempted a lame Steel movie back in the 1990s. These men clash in the time-honored tradition when all new superheroes first meet.

Ace reporter Lois Lane, still grieving over the death of her beloved Superman, starts investigating the four new heroes. After realizing none of these men are actually Superman, she holds out hope the Man of Steel is out there. When the Justice League is attacked defending the President at a speech in Metropolis, the true threat behind the scenes to Metropolis is finally revealed.

Directed by Sam Liu (Gotham by Gaslight, Teen Titans: The Judas Contract), no stranger to these animated DC movies, Reign of the Supermen is a streamlined adaptation of the original comic book arc and flows smoothly in its nearly 90 minutes. Yes, the producers stretched the budget this time and gave the plot more breathing room, well above the usual 70 minutes these animated direct-to-video movies run.

It’s a fun, mainstream take on the new Superman characters and only makes changes in the original plot for two reasons – brevity and fitting into the New 52-inspired animated continuity that has run throughout these DC movies the past few years. It’s probably time that WB Animation drop the continuity, which has felt constricting now that the comics themselves have abandoned the New 52’s costume redesigns and questionable story ideas.

There’s one moment late in the movie, spoiler alert, when Superman returns in full costume. But it’s not Superman’s classic look, but the New 52’s costume which removed his trunks. The New 52’s Superman costume has already been killed off in every medium except these animated movies. Call it petty, but this would have been a perfect time to dump those character redesigns in animated continuity.

I have noticed a real trend in DC’s animated output. They are definitely trying to slip in more and more what I would call “adult” moments with each new movie, even in this PG-13 adventure. There’s some mild off-color language and one joke has the young Superboy suggesting he’s old enough to have sex with Lois Lane. That fits much better in a property like Suicide Squad than it does a movie about Superman’s return from the grave. This material wouldn’t have been included in an animated Superman movie just five years ago.

Given that Superman doesn’t appear until well into the movie, Lois Lane is practically the lead character. Her character beats all ring true until they insert her into the action of the final act. One of the poorer trends in modern superhero storytelling is giving each supporting character their own moment in the sun, even when it doesn’t really fit the story.

Reign of the Supermen is a fine sequel to The Death of Superman with a few small issues. It serves as an enjoyable introduction to characters like Superboy and Cyborg Superman if you don’t read comics, while smoothly telling a solid superhero tale. 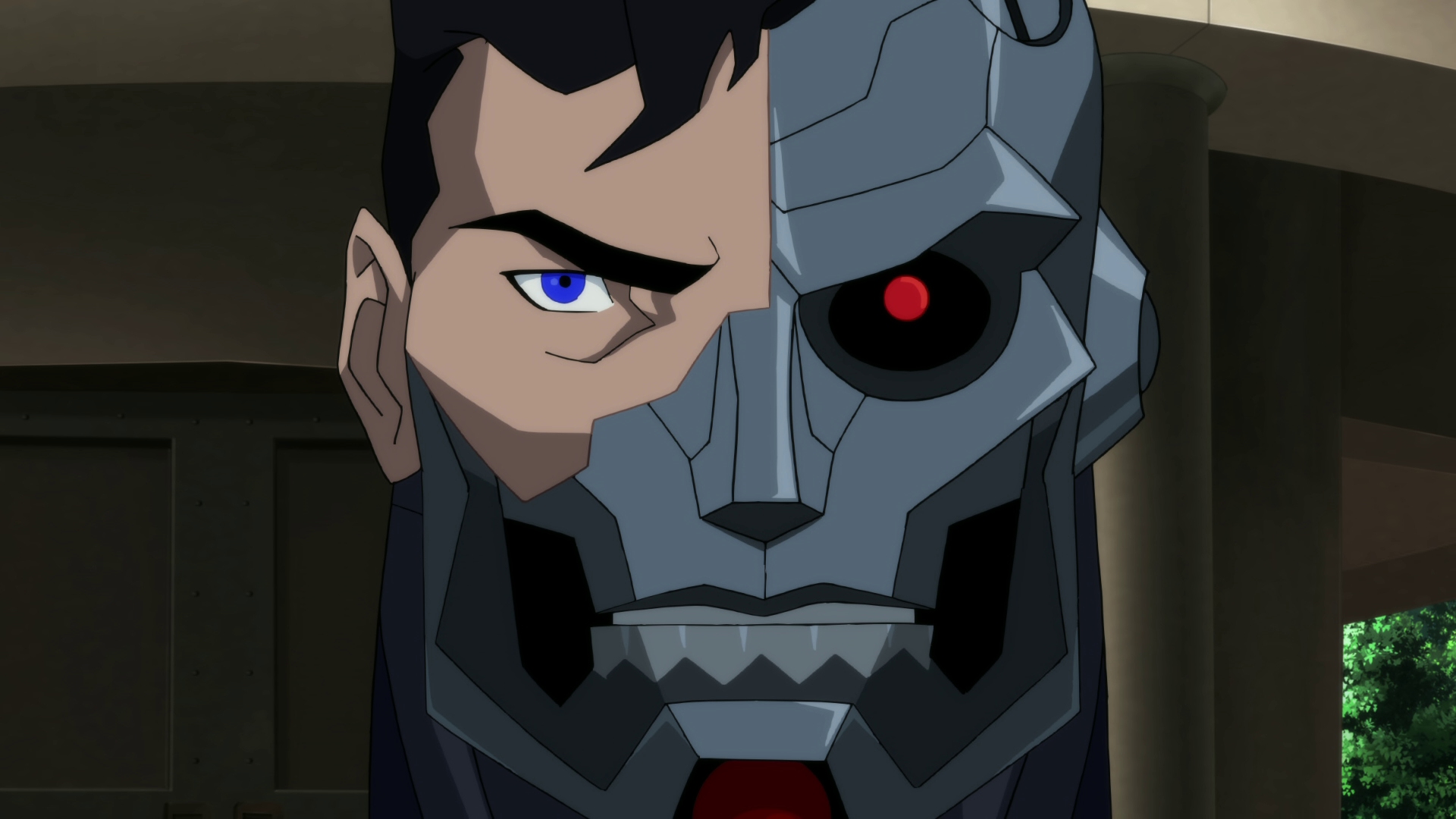 I’m normally lenient on banding issues when they arise in animation. But Reign of the Supermen has real banding issues that can’t be dismissed so easily. Warner Bros. releases the 87-minute main feature on a BD-25. The low-bitrate AVC encode, often hovering in single-digit parameters, leads to major banding and color gradient issues. This is definitely more prominent than usual, even by the low standards of prior animated DC movies released on Blu-ray.

It’s a shame because a decent AVC encode could lick these problems in an instant. WB has never been on the forefront of compression transparency during the Blu-ray era and it now appears you are forced to purchase the 4K UHD for an artifact-free presentation. This isn’t the first time that one of these animated DC movies had compression issues on Blu-ray. Only the 4K UHD is free of banding with its superior HEVC compression.

Outside of the banding, Reign of the Supermen’s art direction and animation looks superb. This is bright, colorful and bold animation made for 1080P video. The 1.78:1 presentation has perfect black levels, deeply saturated primary colors, and some of the more consistent character designs seen from WB Animation.

A lively 5.1 DTS-HD MA soundtrack provides an exciting, discrete audio experience. The energetic sound design has crisp fidelity and plenty of headroom, maximizing the audio’s impact. Dialogue is neatly balanced while action scenes offer a bigger soundstage. Surround cues range from directional panning and explosions, to more ambient support in crowd scenes. It’s a step behind the best theatrical mixes and lacks the massive bass of demo audio, but this is a pleasing surround mix.

Reign of the Supermen has been released in different configurations. There is the standard Blu-ray and DVD combo pack being reviewed here, a 4K UHD release, and exclusive steelbook versions solely found at Target. Early reports indicate the steelbook versions are already scarce at Target. There is also likely a graphic novel edition getting released at Best Buy. If you are wondering, each version shares the same set of special features.

Warner has already let the cat out of the bag that a deluxe edition down the road will combine The Death of Superman and Reign of the Supermen into one release. So take that into consideration when contemplating this sequel’s individual release to The Death of Superman.

The Blu-ray and DVD combo pack includes a MA digital copy redeemable in HDX on VUDU and other MA providers. A very slickly-produced slipcover with embossing is included for early pressings.

A Sneak Peek at the Next DC Universe Movie: Justice League vs. The Fatal Five (09:29 in HD) – This breezy breakdown of animated DC’s next movie has producers like Bruce Timm introducing the characters involved, and how the project developed. This movie is apparently DC’s attempt at a backdoor movie featuring the Legion of Super-Heroes. New Green Lantern Jessica Cruz is also a character.

Lex Luthor – The Greatest Nemesis (16:08 in HD) – Veteran DC producer Mike Carlin delves into what makes Lex Luthor tick and how the character views his greatest adversary, Superman. It’s a cohesive dive into Lex’s personality, bringing in his history from the comics and animation. This is the type of solid featurette often found on these animated DC releases made for comic book fans.

From the DC Vault: Superman: The Animated Series, “Heavy Metal” (20:52 in SD) – An episode from the beloved 90’s animated show featuring John Henry Irons, aka Steel.

Trailers (04:10 in HD) – Shazam! and The Death of Superman trailers can be selected from the menu.

Full disclosure: This Blu-ray was provided to us by the studio for review. This has not affected DoBlu’s editorial process. For information on how we handle review material, please visit our about us page to learn more.

Reign of the Supermen

Reign of the Supermen stands on its own as fine animated superhero entertainment with new characters like Superboy and Steel to the animated movieverse, tackling the question of why Metropolis needs the Man of Steel.

The 15 unaltered images below are taken from the Blu-ray itself. For an additional 28 Reign of the Supermen screenshots in full 1080P resolution, early access to all screens (plus the 20,000+ already in our library), 75+ exclusive 4K UHD reviews, and more perks, support us on Patreon.