Lucky for Bad Boys, the casting department landed Will Smith and Martin Lawrence. Without them, this buddy, prototype cliché action movie doesn’t have anything of value. Even taken as popcorn-chewing summer escapism, it’s all too problematic.

Mid-90s Miami sets the backdrop, this years after Scarface popularized the cocaine trade’s tough guy machismo. Bad Boys then is the antidote, a hyper conservative, anti-drug tirade where two cops (Lawrence and Smith) mow down bad guys. It’s a movie of endless guns, glamorizing the shoot-outs with limited justification. What matters to Bad Boys is whether or not everyone looks slick when doing so.

To get there, it requires a hopelessly demeaning script. Lawrence’s on-screen wife (Theresa Randle) exists only to berate her husband and hold back sex. Other women (Tea Leoni included) earn their part in the script as helpless women, submissive when in the ranks of men, or merely trouble to the male plans. A small fleet of high-class prostitutes further the women’s purpose as desirable figures, nothing less. There’s one woman given power in Bad Boys (Marg Helgenderger). She’s internal affairs, a bitchy sub-character designed to agitate.

Everything about this movie is meant to be cool. Masculine cool, but cool

Smith and Lawrence pair well at least. The two bounce off one another as buddy cop movies require. Smith a vain, rich, suave playboy, Lawrence raising a middle class family. Bad Boys idolizes these two, sweeping the camera around as they stand shoulder-to-shoulder in hero poses. They stay cool under pressure, and handle guns like heavily trained special forces. Running into danger and bending the rules – sticking it to “the man” and wiping out crime. Cool. So cool.

Everything about this movie is meant to be cool. Masculine cool, but cool. Smith drives a six figure car for show. Lawrence tries to rebuke the advances of Leoni without giving in. There’s a police chief who chomps cigars. The aesthetic is that of steamy, super heated city streets, with the police station over humidified and cramped.

And the action is a lark. Smith and Lawrence hijack an ice cream truck that’s stuffed with explosive chemicals. Of course they find a way to weaponize things, burning their foes given the opportunity. Then the finale, littered with explosions and a drag race between super cars. The latter comes after a massive shoot-out drenched in blood, where people explode and topple from high scaffolding. Anything that looks cool to Michael Bay’s genre-altering, hyper-active, fast-cutting insanity. All of that stems from Bad Boys. 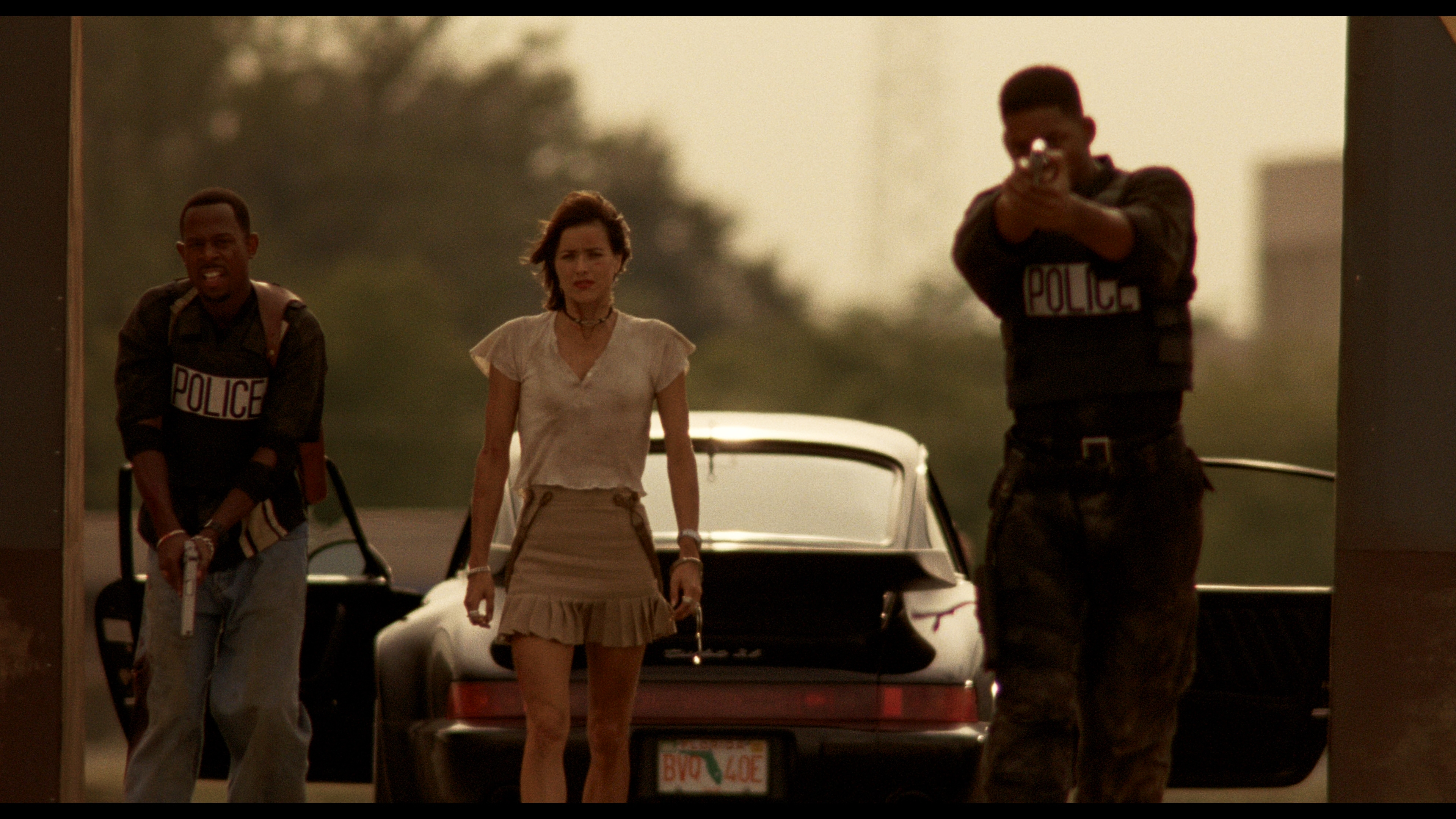 Sony strikes again with another stunning 4K master. Bad Boys draws on exceptional fidelity and detail at its source. Shots of Miami’s skyline look stellar. In close, textural details never fade or disappoint. Consistently sweaty faces produce gobs of natural texture, and this super high resolution material brings that all to the surface.

Some scenes use a natural color palette. Those look great, with dense, saturated hues. The rest takes a filtered orange or blue to make up a monochrome palette. That’s by design. Miami’s sun becomes a character when hanging over characters. Simulated moonlight adds a chill. It’s all pleasant, with enough kick to impress.

Then come black levels, dominate and dense. Dimension juts out from this transfer, capturing perfect shadows and the details within. Added spark from highlights in a smart HDR pass complete the needed ingredients. Shots of sunlit exteriors push hard on brightness, while sunsets dazzle in their beauty.

Beefy LFE is needed to counter the stock sound effects. Gunfire highs come from a generic library and sounds like it. Shots fall flat, out of date with the visual flair. Blame the budget.

Luckily, the bass support is there, with plenty of room shaking impact. Explosions make their mark. Shotguns drop massive power, accentuating the action. A club sequence matches the beat with vibrant low-end support.

Compared to modern action, this Atmos outing lacks the wild directionality. Shoot-outs flutter in the rears, but tepidly so. Chases track motion with passable effort. A helicopter sweeps into the soundstage early on, pleasingly aggressive.

Over on the Blu-ray (and only the included Blu-ray), Michael Bay discusses the project on a commentary track. Then, the dated featurette Putting the Boom and Bang in Bad Boys, running 24-minutes in a garish 4×3-to-16×9 stretched presentation. A few music videos and trailers follow.

A ’90s relic, the problematic Bad Boys is lucky in casting Will Smith and Martin Lawrence as they’re the only reasonable energy.