Science failed in defeating Godzilla. A nanometal city – a stand-in of sorts for popular monster Mechagodzilla – was obliterated in the last chapter of this anime series. Enter religion, a last gasp of a dying civilization, trapped on an Earth ruled by a miles tall Godzilla who shows little interest in wanting humanity around.

Planet Eater injects this trilogy with its philosophical might. It questions why desperate people turn to belief in a time of crisis. It’s a story of where, when, and how religion breathes. Then, when faced with the reality of cultists and preachers, humanity realizes their folly. Pretentious, to an extent. 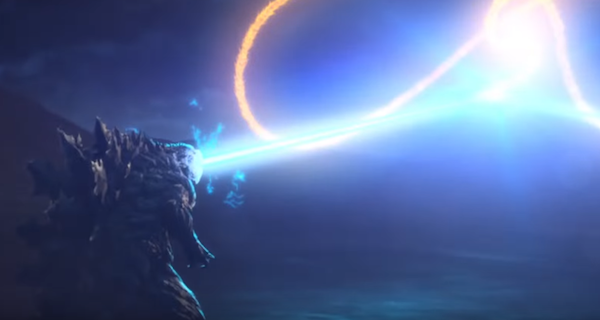 If there’s any credit to this Godzilla spin-off (of sorts), it’s definitely subversive and creative

This is not a series that looks kindly on human behavior. The 1954 original boldly chastised American war. Others represented mistreatment of Japanese natives, genetic experimentation, and economic expansion. Planet Eater is among the harshest, using the three-headed King Ghidorah as a symbol of civilization’s desperation and foibles. Hearkening back, scenes animate the Hiroshima bombing, which Planet Eater deduces was the Earth society’s finale.

All of this culminates in a battle between Godzilla and Ghidorah, Godzilla destined to keep humans in line, Ghidorah entering – as the title says – to suck all life from Earth. It’s a matter of destiny, of which Haruo Sakaki (Mamoru Miyano) will decide.

What a tragic waste Planet Eater is then, Haruo a sacrificial dud of a lead character. The floundering action never rises above a molasses-slow bore. It takes miles of exposition to even explain what’s happening as bit characters stare at holographic screens, trying to espouse gibberish concerning universes, matter, and existence. 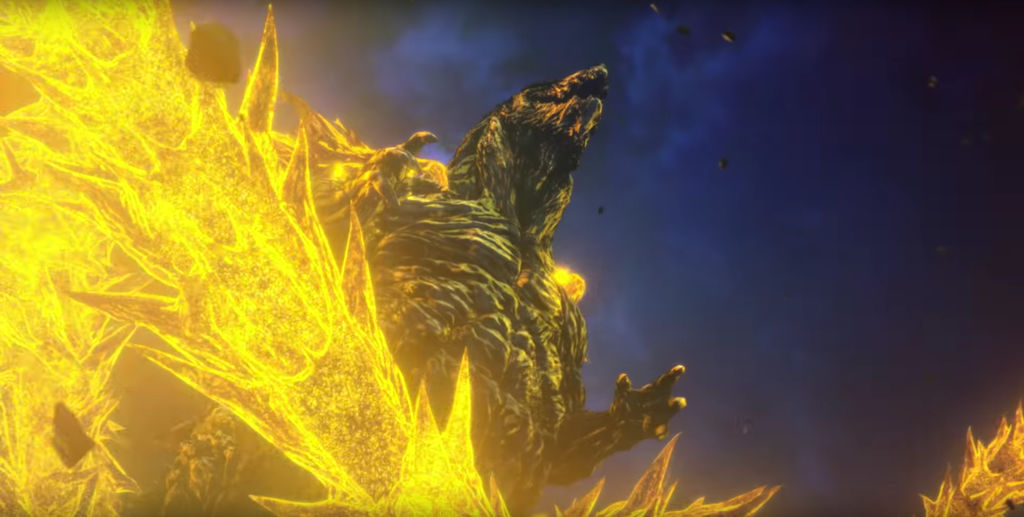 All of the build-up to this finale, including the two films prior, sluggishly rot the pace. There’s no genuine urgency to Planet Eater. With Godzilla sidelined as a silhouetted, immobile metaphor, everything falls to the underwritten characters to propel this narrative. That’s not a success.

Peter Jackson’s The Hobbit needed three movies more than this anime series. So little of this Godzilla anime adventure amounts to anything. An entire subplot of Earth-born humans and aliens working in tandem is literally wiped from this story. Nothing the pairing argued over or accomplished amounts to purposeful. 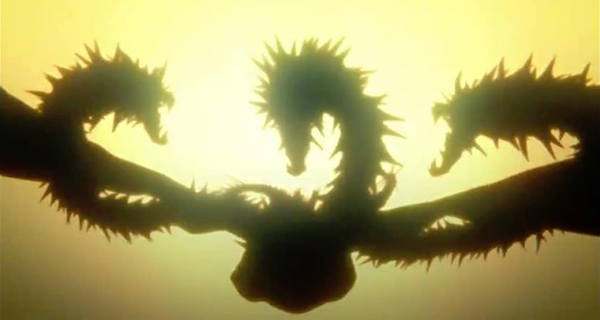 Those here for the monster duel see Godzilla stuck as Ghidorah’s three heads pop out of wormholes, statically munching on Godzilla’s arms. At one point, Godzilla lifts into the air, ludicrous as it sounds, before the battle takes the expected turn. Most of the fight hardly seems animated. What a drag.

If there’s any credit to this Godzilla spin-off (of sorts), it’s definitely subversive and creative. Once in a while, Godzilla needs that. This lore and the exciting potential evident in the set-up of Godzilla: Planet of the Monsters sadly flew off-course, but the attempt holds value. Godzilla representing human failure, determining their fate, escalates the monster’s origins as a figment of war.

Doing nothing aside from boring an audience with that tantalizing possibility is too grievous an error to forgive.

Rife with interesting ideas and philosophies, Godzilla: The Planet Eater is ultimately too boring and stuffy to be entertaining.