The Demonic Prequel To The Conjuring Movies

An unholy secret lies at the heart of a decrepit abbey in Romania from this thrilling new installment of the Conjuring universe.

Filmmaker James Wan steps back from directing this Conjuring prequel for producer duties, smoothly handing things off to Corin Hardy (The Hallow). The Nun gives us the frightening backstory on the terrifying, and immensely popular, demonic creature first seen in The Conjuring 2. It’s one of the few recent Hollywood prequels that possibly works better than the original hit movie that spawned it.

A priest and nun-in-training are sent by the Vatican to investigate a nun’s mysterious suicide at a remote abbey in Romania. Father Burke (Demián Bichir) and the young Sister Irene (Taissa Farmiga) are guided there by a man named Frenchie (Jonas Bloquet). It’s a group of eminently likable characters for an intense horror film.

They soon realize a deeply evil presence lurks at the abbey after a series of increasingly disturbing and haunting moments. Their very souls are at risk as they encounter the demonic spirit in its original stomping grounds. The cloistered nuns living at the abbey are seemingly little help in aiding the investigation, cut off from contact with the outside world. The weary priest soon realizes the entity wants to escape the abbey.

The Nun is pure gothic horror updated for the 21st Century

The Nun is pure gothic horror updated for the 21st Century. Its foreboding atmosphere and darkly rich production design are perfect for this smart pastiche of possession and demonic tropes seen over the years. This is for fans of The Exorcist and other religiously-themed horror movies that explores evil in its most primal form. Drawing on the Catholic faith, it ties in a priest that had an exorcism once go badly wrong, and a young nun-in-training that hasn’t taken her vows. Set in 1952, you could almost call this movie the Big Bang moment of the Conjuring universe.

Filmmaker James Wan is the best mind working in horror today and his line of Conjuring-related movies have been immense crowd-pleasers for the horror community. A spin-off of The Conjuring 2, The Nun may have the most convincing frights seen yet in the shared continuity of this filmverse. The movie has decent plotting, intriguing characters, mindful tie-ins to the other Conjuring films, and great set pieces for real horror fans. This is not watered-down horror entertainment made for the PG-13 crowd.

The demonic and creepy nun is one of best horror villains to come along in a long time. I was amazed to discover her visage is played by an actual actress, under a ton of make-up. The practical effects are creepy and fantastically effective. The character has been called a new horror icon and it’s hard to disagree with the sentiment.

As soon as The Nun ends, the next thought that should pop into your head is when does the sequel come out? It’s too good of a horror movie not to get a sequel. This is a strong entry in the Conjuring universe that should draw in new fans. 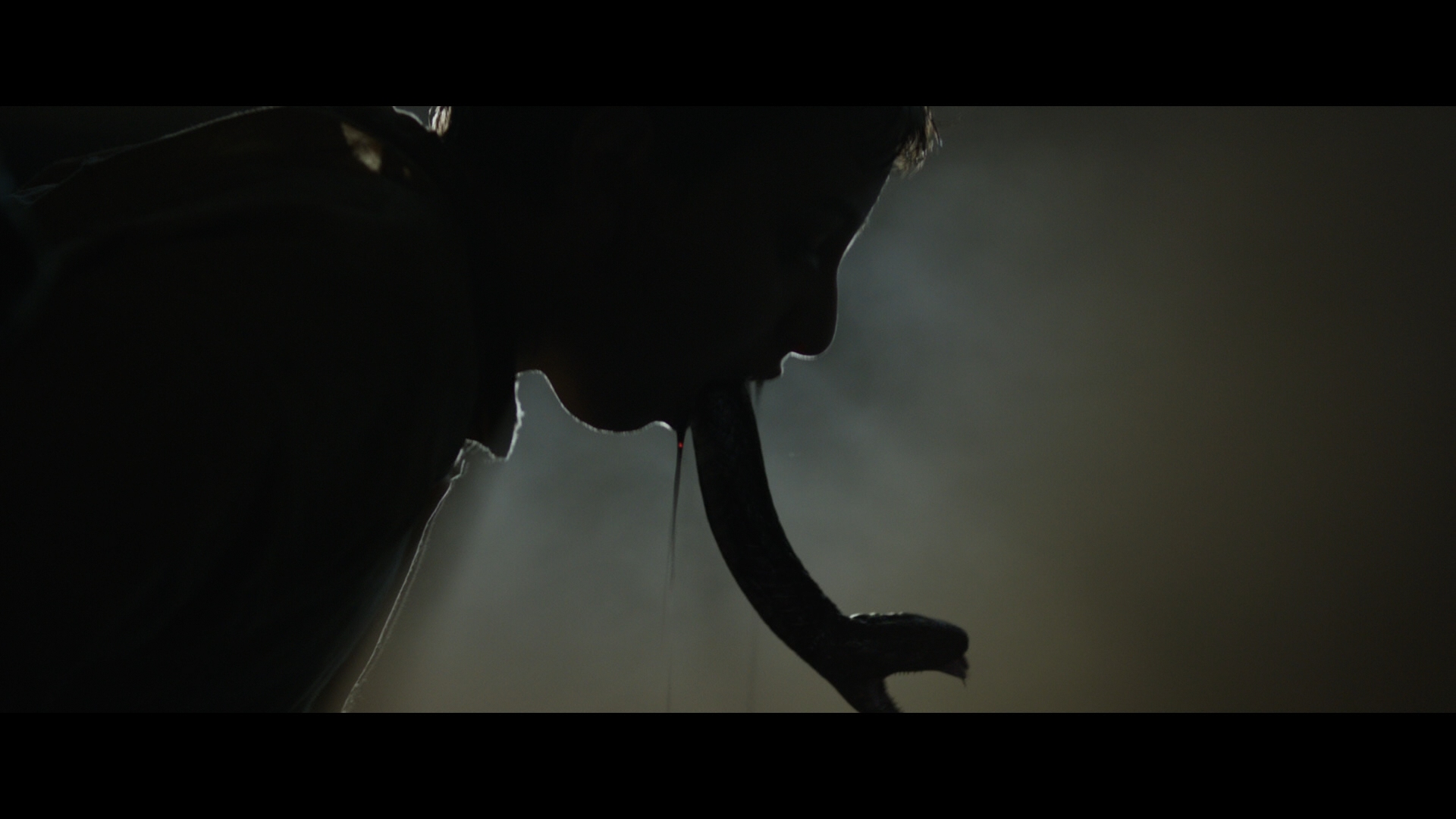 The Nun looks great at 1080P resolution on Blu-ray. The digitally-filmed movie has the crisp definition and razor-sharp clarity seen in the previous Conjuring films. The digital color grading embraces a darker aesthetic with superior shadow delineation and excellent black levels. If something disappears into the shadows, it’s what the filmmakers wanted.

It is shown in an impressive 2.40:1 aspect ratio. The top-notch cinematography works hand-in-glove with the direction to create The Nun’s ominous tone and atmosphere.

The 96-minute main feature is given a solid AVC encode on a BD-50. Outside of a couple brief seconds, there’s no significant compression issues interfering with the video’s pristine cleanliness. The video is packed with immense detail and appears unfiltered. Every bit of the gloriously gothic production design makes an immediate impact due to the film’s immense clarity.

Frightening audio design has always been a big feature of the Conjuring movies. The Nun receives an excellent Dolby Atmos soundtrack and an alternative 5.1 DTS-HD MA option. Go with the Dolby Atmos selection if you want the absolute best aural experience. This is subtle and creepy audio woven into a brilliant surround mix.

A layer of spooky sounds help build the movie’s daunting atmosphere. You get small sound cues coming from behind that will frighten even the most jaded movie reviewers.

Dynamics are impressive, even if the whisper-quiet dialogue sometimes gets lost a bit in the process. The mix doesn’t forget using the LFE channel, pumping up bass for the most dramatic and intense scenes.

Optional English SDH, Latin Spanish, Parisian French, Canadian French, and Brazilian Portuguese subtitles are included in a white font. They remain inside the 2.4:1 presentation at all times. French (Canadian), Spanish and Portuguese dubs are available in 5.1 Dolby Digital. A Descriptive Audio track in English is included.

It should be mentioned that The Nun also came out in a 4K UHD edition. Germany actually received a steelbook version of the release. The regular Blu-ray edition comes in a slipcover. It also contains a DVD and digital copy. Redeeming the digital copy on VUDU grants both Movies Anywhere (MA) and UltraViolet digital rights to The Nun in HDX quality.

This isn’t the most loaded Blu-ray edition but what it does have is fairly interesting.

A New Horror Icon (05:18 in HD) – James Wan, Colin Hardy, and primary cast members go behind the scenes in this interesting, concise featurette covering the movie’s production. It’s a brief, tantalizingly well-done featurette that could have been expanded.

The Conjuring Chronology (03:50 in HD) – This featurette covers where the Nun fits into the Conjuring timeline.

Deleted Scenes (12:18 in HD) – Seven finished deleted scenes are available. Some are small plot points, while a couple change how the audience would view each character.

Trailers (All in HD) – Trailers for The Meg, Aquaman, and Fantastic Beasts: The Crimes of Grindelwald play before the main menu.

An excellent new entry in The Conjuring universe, The Nun has old-fashioned gothic chills wedded to modern effects with outstanding results.

The unaltered images below have been ripped from the actual Blu-ray. For an additional 28 screenshots taken from The Nun, early access to all screens (plus the 20,000+ already in our library) in full resolution, dozens of exclusive 4K UHD reviews and other perks, support us on Patreon.