A miniature horse dreams of joining Santa’s flying reindeer team in this uneven animated holiday tale that feels too adult for its intended child audience, while too childish for adults. Right in time for Christmas, Elliot: The Littlest Reindeer has Josh Hutcherson voicing the horse alongside a voice cast that includes Samantha Bee, Martin Short, Morena Baccarin, and John Cleese.

When Blitzen announces his retirement three days before Christmas, Santa’s elves hold a press conference announcing open try-outs to replace him. A miniature horse named Elliot, living in North Dakota at a petting zoo, sneaks into the try-outs at the North Pole with the help of his friend Hazel the Goat. He dresses up with fake antlers to participate in the Olympic-style reindeer competition. Elliot goes up against top competitors from across the globe with Hazel’s aid, including Donner’s son.

A Canadian production, the PG-rated family movie has an uneven tone to its humor and characters. The big sub-plot after Elliot’s quest is a disturbingly dark story-line about a creepy-looking elf called Lemondrop. After years of managing Santa’s sleigh team, he’s fed up with the animals and wants to use rocket-powered sleighs in their place. Lemondrop has been plotting against the reindeer for years. I’m not sure it’s the right message in a movie clearly aimed at young children.

The feel-good movie is mostly harmless fun aimed at young children. The truly standout character is Hazel, voiced by Samantha Bee. Her goat antics provide the movie’s best laughs. Some of the story-lines feel a little inappropriate for kids. The derivative family flick feels light despite a fairly hefty 90 minutes. 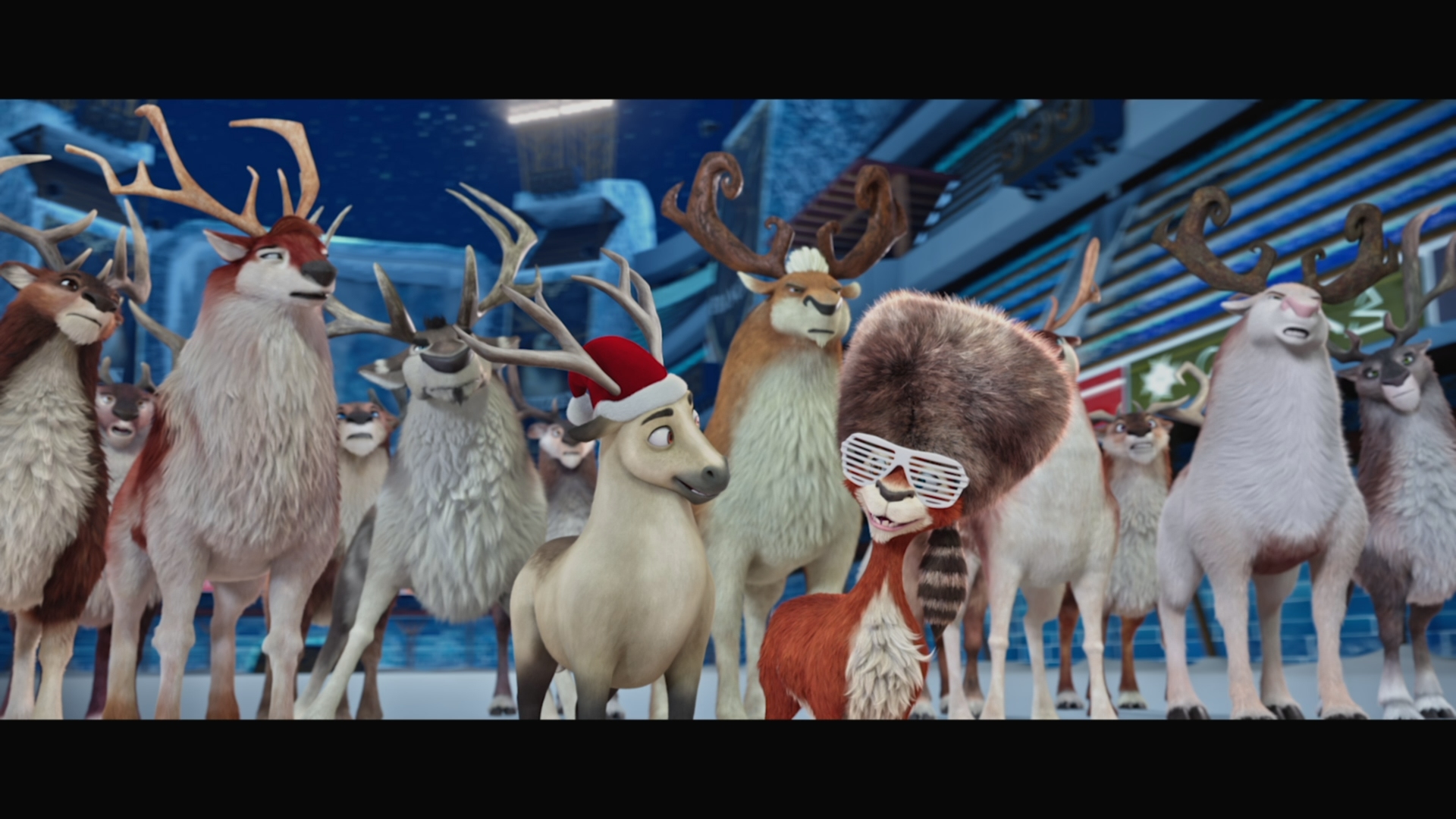 Screen Media distributes the animated Canadian production in this pleasing Blu-ray presentation. Elliot: The Littlest Reindeer may not have the latest and greatest CGI, but its slick visuals work very well at 1080P resolution. Colors are bright and heavily saturated. Only a few hints of interlacing artifacts in the CGI are visible. It’s a strong technical presentation of modern CGI with a few caveats.

The 89-minute main feature is encoded in low-bitrate AVC on a BD-25 and shown at its native 2.35:1 aspect ratio. It’s a flawless encode with one exception. There is one scene approximately twenty minutes into the movie that is replete with banding. It appears the animators forgot to dither this scene, because the rest of the movie is pristine and free of banding.

The actual character designs and art direction are a little more questionable. There have certainly been more imaginative visuals dreamed up for Santa’s home and workshop. Something is off about Elliot’s design as a miniature horse. It’s just not visually pleasing as expected for the movie’s central character. The North Pole also looks underwhelming. Set around Christmas, Santa’s home barely looks decorated.

This is not the densely layered CGI of Pixar with copious background details and it barely contains anything more than snow. The human designs aren’t great, either. The owner of the petting zoo has weirdly shaped ears, even for simplified CGI artwork.

The 5.1 DTS-HD MA soundtrack is a real winner for the family flick. While there are no big musical numbers in the movie, reindeer fly across the soundstage with impressive directionality and staging. The discrete audio design and mix offers strong immersion. Every sound effect has a real presence and body in space. Children will certainly be impressed with this surround presentation. Dialogue is fluidly rendered in crisp, intelligible clarity.

Optional English SDH subtitles appear in a tiny white font, hanging partially outside the widescreen presentation. I’ve never seen subtitles encoded in this small of a font. They are readable only if you have good vision.

“Meet Elliot” Featurette (04:17 in HD) – Clips of cast members Josh Hutcherson and Samantha Bee voicing their characters to early pre-rendered animation are included in this short featurette. Other cast members like Martin Short discuss their roles.

An uneven animated flick for the holidays that may please children but isn’t worth much more than a rental.

The unaltered images below have been ripped from the actual Blu-ray. For an additional 17 screenshots taken from Elliot The Littlest Reindeer, early access to all screens (plus the 19,000+ already in our library) in full resolution, dozens of exclusive 4K UHD reviews and other perks, support us on Patreon.