Bruce Campbell fends off his possessed hand, an undead girlfriend, demonic trees, and screechy monsters in this sequel. It’s wild. Director Sam Raimi went on to tackle big budget Hollywood spectacles later in his career, but Evil Dead II is still his signature triumph. Directing Capmbell to convincingly brawl with his left hand – with the set all to himself – is a masterstroke of weird genius.

Like its predecessor, Evil Dead II celebrates horror. It’s a movie about demonic spirits manipulating people, taking advantage of their emotional attachments. How cruel. The memorable touch comes from the absolute mania that plows through this story, a concoction of live action cartoon pulp, with a distinct, bizarre, frantic method. There’s nothing like it, whether considering the original, the sequel (the brilliant comedy Army of Darkness), or imitators.

Don’t consider Evil Dead II as more than its parts. Any religious subtext is ground into the grit of this isolated cabin, or maybe drowned under the tsunami-like blood flows. This isn’t a film considerate of character either. Even Ash (Campbell) doesn’t do much beyond follow the hero’s journey, albeit a sadistic one.

The same goes for tone, whipping around between horror, comedy, horror/comedy, psychological terror, and slippery gorefest. Evil Dead II lacks the ambition to settle down but it never needs to. Every bit of its 84-minutes fills with expressive visuals, many nonsense, but utterly beautiful in considering the craftsmanship of the make-up effects. Sam Raimi’s own brother Ted is stuffed inside a fat suit so sweltering, there’s a shot in Evil Dead II where his sweat visibly sprays from the foam. That’s dedication.

Essentially a small scale haunted house (nay, haunted cabin) thriller, the tropes and cliches spew as often as blood. The one road out is blocked. Backwood stereotypes make up the only population. Fan contention considers whether Evil Dead II is a remake of the first, and there is a case. One of the kills follows the series’ progenitor exactly (thankfully minus the suggested rape). Yet, stock characterizations and familiar kills considered, Evil Dead II brings these things to life with peculiar insanity. Even when familiar, they look, sound, and act idiosyncratic. Nothing matches the dangerous talent of Evil Dead II. 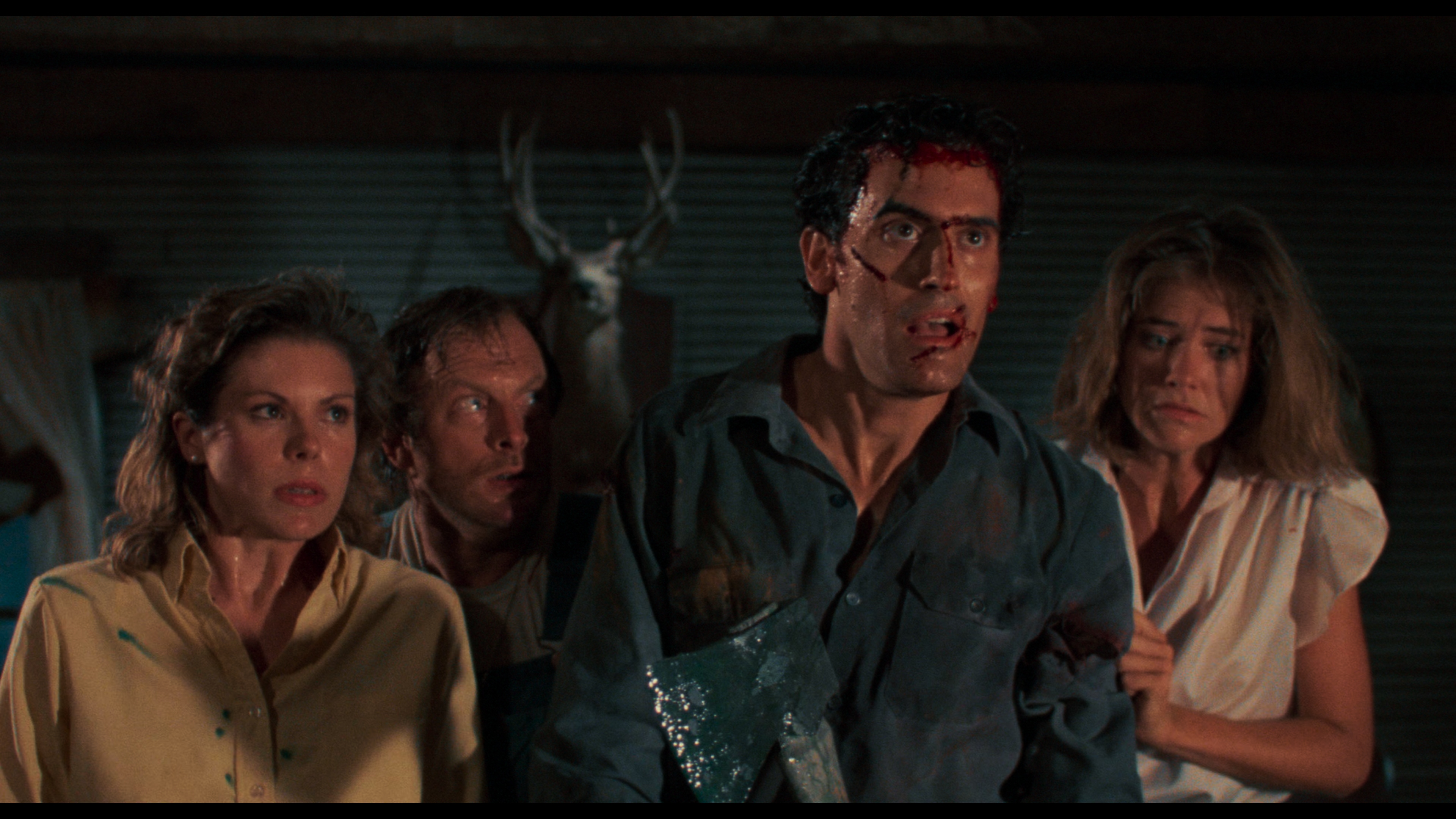 Note: For an exclusive UHD review and 4K screen shots of the first Evil Dead, support DoBlu on Patreon.

A 4K scan means dollops of detail and definition. Even with Evil Dead II’s wild nature and darkness, texture stays high. Tremendous fidelity in close captures every bit of gore. Facial detail reaches a new peak for this feature, and those make-up effects dazzle even more than they once did.

Given the touch of Dolby Vision, this becomes a story of black levels. The best stuff concerns the cabin exterior, miniatures included. When the trees come to life near the finale, their bark sticks out against the night, with precise black applied. Density is thick, and doesn’t sacrifice detail to get there.

Enhanced color doesn’t betray the source intent. Ash’s blue shirt stands out prior to its drenching in fluid. Flesh tones stabilize, and primaries boast plenty of energy. Wait for blood to spew from the walls to appreciate the dazzling shade of red included here.

Opening in a spiral as ghouls pass the frame, the DTS-HD 5.1 offering immediately travels into the rears. Screeches and spooky sounds transfer front-to-back perfectly. Later, around 47-minutes, sounds travel around the soundstage to freak out the characters. It’s a perfect spiral. Extra ambiance adds tension in the cellar as water leaks from pipes in positional channels. A touch of loose bass factors in during high action, although limited in impact.

The greater story is Evil Dead II’s wandering fidelity. Even with age, this track sounds particularly coarse. Dialog comes through with exaggerated treble, straining as it tries to maintain life. It’s odd this sounds rougher than Evil Dead, the latter of which was completed with significantly less financial backing.

On the UHD, a crowded but fun commentary brings Sam Raimi, Bruce Campbell, co-writer Scott Spiegel, and make-up artist Greg Nicotero together to reminisce. Also included is the nearly hour long Bloody and Groovy, featuring a number of names like Guillermo Del Toro and Edgar Wright discussing the influence of Evil Dead II.

Over on the Blu-ray, there’s Swallowed Souls, a 94-minute documentary that covers the production. Yes, that’s longer than the movie itself, and in its own terms, just as good. Cabin Fever is a collection of behind-the-scenes footage shot by Nicotero. It’s awesome. In Road to Wadesboro, the original locations receive their due. A slew of production stills feature in Behind the Screams running 17-minute with commentary. While some of the footage is borrowed from Nicotero’s collection, a look at the effects in The Gore the Merrier runs 32-minutes.

Some stills and trailers cap this disc off.

The following six screen shots serve as samples for our Patreon-exclusive set of 36 full 4K screen shots grabbed directly from the UHD: