“I love drugs.” That early line in Bright Lights, Big City sums up this cautionary tale from director James Bridges (The China Syndrome) and producer Sydney Pollack (Out of Africa). Released in 1988 at the height of Michael J. Fox’s career after the mega-success of Back To The Future and starring on Family Ties for most of the decade, it’s a tale of a Midwest boy coming to New York and getting swept up in the cocaine-fueled excesses of the 1980s. While not as successful or smart as the novel it’s based on, the engaging drama and sharply-drawn characters are a captivating portrait of the decade.

Michael J. Fox is Jamie Conway, an aspiring writer who leaves behind Kansas for the promise of Manhattan’s nightlife and the chance to have a serious writing career. Hitting the clubs night after night, Jamie’s life soon spirals out of control, risking his career and losing the wife he loves. The star-studded cast includes Kiefer Sutherland (24), Phoebe Cates (Gremlins), Academy Award Winner Dianne Wiest (Hannah and Her Sisters), Swoosie Kurtz (Overboard) and Kelly Lynch (Road House).

Adapting author Jay McInerney’s popular novel, it’s clear the movie was designed from the get-go as Oscar bait. The movie is an interesting, clever snapshot of a certain lifestyle that became popular in the 1980s. You see some of it in Wall Street and other movies from the era. Cocaine became the recreational drug of choice for high-powered urbanites in Reagan’s America.

While he probably wasn’t the best pick for such a heavy role at that point in his career, Fox gives a capable performance

Fox’s Jamie Conway isn’t a bad guy, but he barely can hang on to his lowly editor’s position at Gotham Magazine, a stand-in for the New Yorker. Lucky to hold a job there with his qualifications, he’s a fact-checker for the magazine’s non-fiction section. His dreams of being a writer seem further and further away each day. Married to a beautiful model played by Phoebe Cates, his personal and professional lives are collapsing as he uses more cocaine to keep up. Kiefer Sutherland plays a sleazy friend that goes carousing with Conway, always looking for the next line of blow as they hit the town.

Bright Lights, Big City is a good movie, but you have to let it come together before rendering a verdict. It eventually reveals the reasons behind Jamie Conway’s collapsing marriage and a recent trauma that led him down this dark path. Many questioned Fox in the role, since the young actor had a hard time shaking his good-guy persona from earlier projects. While he probably wasn’t the best pick for such a heavy role at that point in his career, Fox gives a capable performance.

On a side note, Michael J. Fox’s wife Tracy Pollan has a small role in the movie. While the couple first met when she played a guest role on Family Ties, their relationship began in earnest filming this movie. They are married to this day. 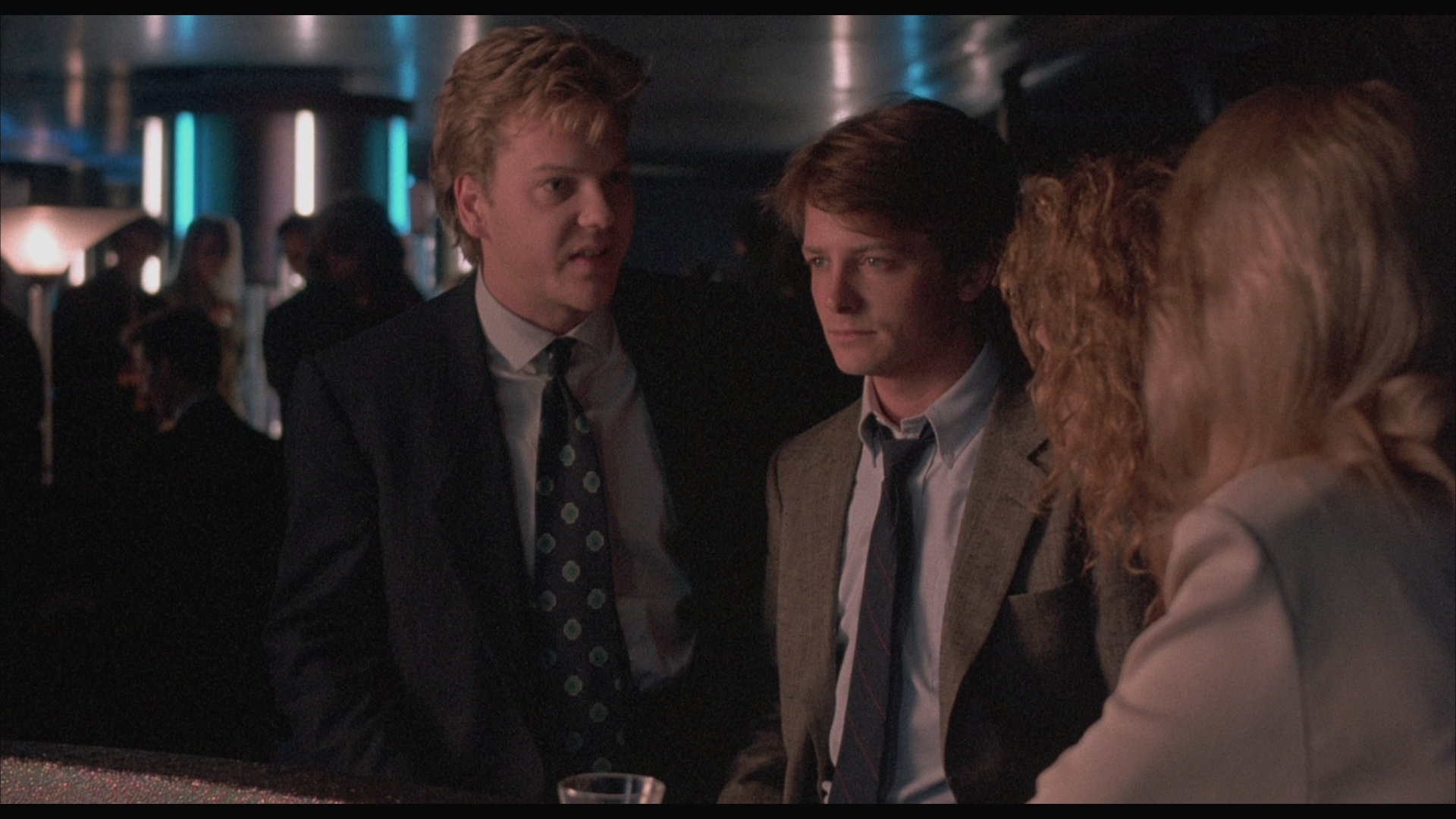 MVD is at the mercy of MGM’s licensed film transfer, which has positives and negatives. Bright Lights, Big City runs 107 minutes on a BD-50 with generously encoded AVC. The 1.85:1 presentation comes from stable film elements in solid condition.

Colors and black levels are consistent, if not perfectly excellent most of the time. The earthy palette has even saturation and healthy flesh-tones. Some sharpening is evident when viewed closely.

The grainy film structure is free of dirt and debris. Definition and clarity are fairly nice for the 1980s drama. Gordon Willis’ cinematography doesn’t pop with outrageous levels of detail. This is a fairly common-looking drama from the 1980s with a satisfactory film transfer. This Blu-ray represents a significant improvement over DVD for the film.

Music and dialogue sound quite fine in the movie’s original audio, heard here in clean 2.0 PCM. The stereo mix has solid dynamics and tight bass when necessary. One of the movie’s big lures is the New Wave soundtrack with songs from New Order, Depeche Mode, and even Prince. The pulsating night club scenes sound great in lossless clarity. Donald Fagen of Steely Dan fame provides the score.

Bright Lights, Big City is #12 in MVD’s Rewind Collection. The MGM property received the special features on the prior special edition DVD, so nothing is really new here. It comes in a clear case with a slipcover. The cool thing about the slipcover is the faux Erol’s Video label on the front. For those too young, Erol’s Video was a big Betamax rental chain back in the 1980s that folded up sometime in the 1990s. They were Blockbuster before Blockbuster.

A neat poster of the film is included, folded up inside the case.

Commentary with Author/Screenwriter Jay McInerney – The novel and screenplay were vaguely autobiographical, so his commentary adds an interesting perspective rarely heard on disc. McInerney dishes a little gossip but mostly goes into his creative process, explaining why certain lines were written and the difficulty adapting his own novel to a screenplay.

Commentary with Cinematographer Gordon Willis – A strong discussion by the veteran cinematographer that has since passed, explaining his lighting schemes and compositions for many shots. This is an informative, concise commentary useful for aspiring filmmakers.

”Jay McInerney’s The Light Within” featurette (12:11 SD) – The author discusses his struggle naming the character that went nameless in the novel, among other topics. It’s a nice addendum to his commentary.

“Big City Lights” featurette (14:55 in SD) – A trio of writers and culture reporters discuss the widespread prevalence of cocaitne back in the 1980s from a cultural perspective and the film’s New York setting during the period

MVD Trailers (All in HD) – 37: A Final Promise, Basic Instinct 2, Not Without My Daughter, Windrider, Windtalkers

Decidedly less family-friendly fare from Michael J. Fox at the peak of his career, Bright Lights, Big City is an engaging drama about the dangers of cocaine.

The unaltered images below have been ripped from the actual Blu-ray. For an additional 26 screenshots taken from Bright Lights, Big City, early access to all screens (plus the 20,000+ already in our library) in full resolution, dozens of exclusive 4K UHD reviews and other perks, support us on Patreon.