In the Heart of Texas

The sun barely shines in Galveston. It’s as physically dark as it is metaphorically. An aging mob hitman, a teenage hooker, and a three year-old girl come together in this cruel drama. Their paths meet as if by cruel fate – each is trying to escape a brutal past.

Set in 1988, Galveston’s story concerns society’s outcasts, criminals if never by choice. For a time, this acts like a road movie, putting Roy (Ben Foster) and Rocky (Elle Fanning) together in a truck after a mob set-up goes wrong. The two just drive. In the beginning, it never matters where. Little else matters than – literally – putting their pasts in the rear view.

Roy is not a good man. Although never clear what he did before Galveston’s opening credits, he’s not a clean individual. He killed people, certainly. Galveston then needs to reform him, requiring a show of empathy and right as he bonds to this struggling girl. Through Foster’s performance (superb work), Roy quickly evolves. In Rocky, he sees someone like him, who just wants an escape.

It’s a story of poverty and crime, but an empathetic one. The script doesn’t judge. Roy and Rocky project crass personas because of where they come from; Roy is too far lost as to totally separate from his criminal background. But when together, they find a normalized existence. A key scene in the third act sees the two shedding their gruff exteriors, enjoying a night out and dancing. Together, they found an out.

Were Galveston not so grim, there’s a grand redemption story in its ranks. A beautiful one even. Even with stories of rape, abandonment, and murder, Galveston says there’s always a chance to recover – not forget, but recover.

Major credit goes to this script then for not giving in. Although emotionally secure, the pair remain in physical danger. Galveston doesn’t let go. Scenes of violence and bloodshed follow, including a master shot that sees Roy attempting to escape his captors. Tension runs high, fueled by a brutal discovery that cements Galveston’s viciousness. This world lets no one go free.

Galveston does endure some pacing ruts. Long shots of calm and quiet resonate more for these characters than an audience watching them. Luckily then, the two leads produce captivating characters, real and heartfelt. They carry Galveston through to the next dramatic milestone. There’s a need to see them succeed. The reality they exist in is too hurtful for that though. 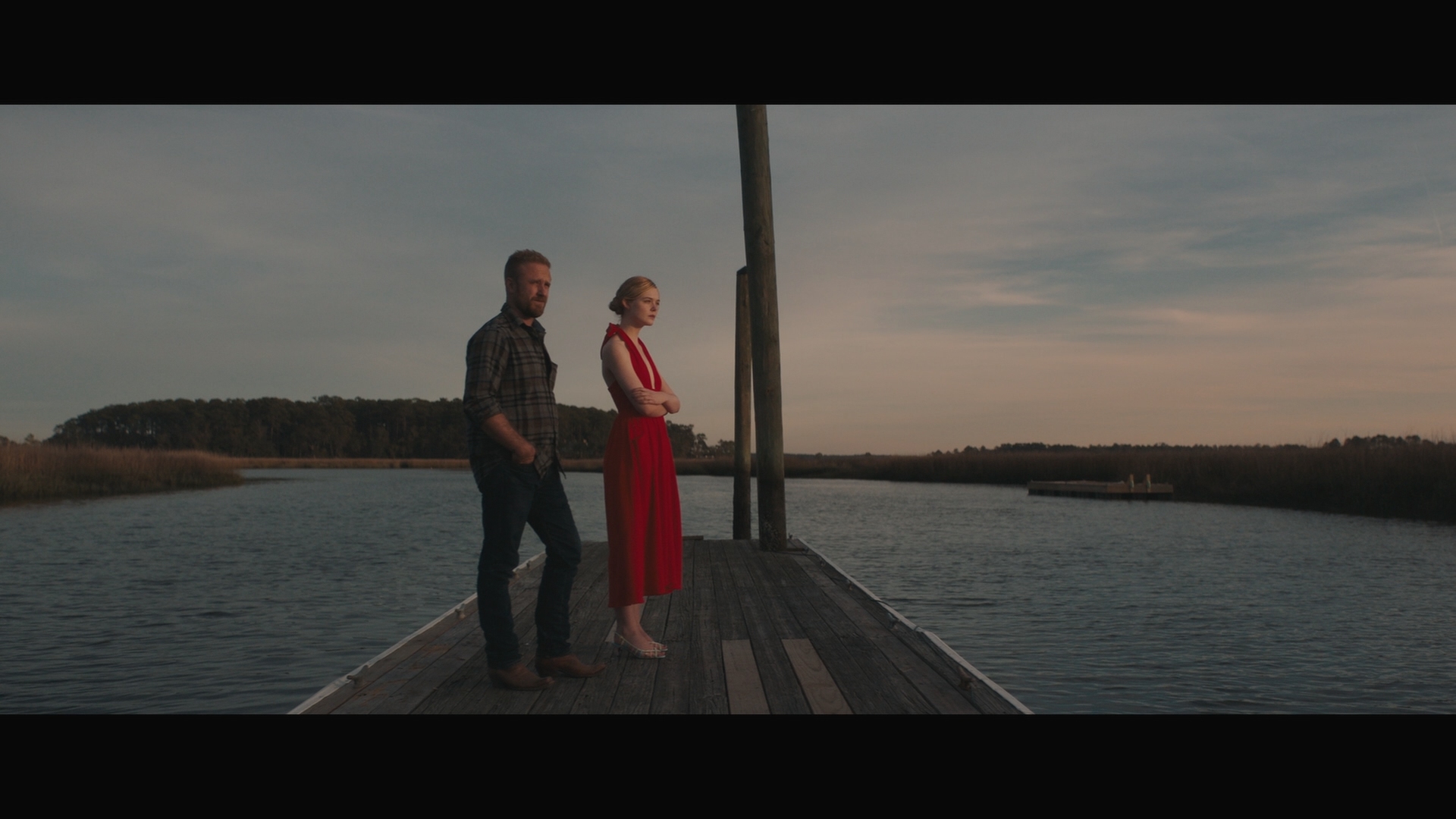 There’s dark and there’s whatever this is. Galveston creates a new standard in black crush, so devoid of visible… anything that making out the actors in shadows proves difficult. Black is legitimately black, so that’s great, but so black as to smash every ounce of possible detail. Not great. Multiple shots pass by where almost nothing is seen – just blackness.

Were it not for the highlights of the HDR pass, Galveston might exist in a total black hole. Light sources do glimmer, bright and satisfying in the background. When outdoors in daylight, the skyline produces a great light source. Car metal reflects sharply. One shot of the ocean lets the sun reflect from the water, gorgeously sparkling as the camera pans by.

Even in those scenes, such as those set outside a hotel location, imagery looks dimmed. There’s minimal oomph to this disc. The idea of dynamic range is outright laughable in spots. When contrast allows, texture seeps in from this upscaled source. That’s fine, if limited.

Any assumption that Galveston’s darkness is part of the cinematography is wrong. The Blu-ray shows why. Those shots covered by pure black on the UHD do not match on the Blu-ray. It’s as if the entire movie were shot twice, once with light, once without.

While Galveston is visible at 1080p, it’s not without problems. Extensive banding is introduced, especially on the hotel’s interior walls. That’s joined by extreme bouts of noise. Turns out the crushing black levels hid some unsightly material.

Everything else fares about the same. Colors lack the same density yet still create a sharp palette. Sharpness and detail maintain consistency, with nice texture.

Routine 5.1 mixing adds in ambiance to dress up this dialog-led drama. Bright bar scenes pair well with shots inside a factory. The two do well when enveloping the actors, making full use of the front and rear soundstages. Just before the climax, Foster returns to his home as a hurricane approaches, winds and rain whipping hard.

A few bits of action remain stuck in the fronts. Visual staging does not, however, allow for any real motion in audio. LFE sits on the sideline, smoothly adding bass to music, otherwise stepping aside.

A 17-minute making-of is better than expected, delving into typical topics like the casting and characters, but doing so with strong, honest interviews. As the only extra, this one earns its keep.

The 15 unaltered images below represent the Blu-ray. For an additional 15 Galveston screenshots, early access to all screens (plus the 20,000+ already in our library), 60+ exclusive 4K UHD reviews, and more, support us on Patreon.

The following six screen shots serve as samples for our Patreon-exclusive set of 30 full 4K screen shots grabbed directly from the UHD: