Peppermint is the same movie as 2018’s remake of Death Wish. The only differentiating factor is Peppermint’s lack of gun fetish. And the lack of Bruce Willis. That role of an average American turned street vigilante goes to Jennifer Garner.

Garner’s fine for what Peppermint needs. Tough, grizzled, capable; she stabs and shoots with the best of them. Her action star qualities do not come into question. The rest of this movie does. Peppermint exists in a ludicrous reality, free of credibility’s obnoxious handcuffs. Soccer mom versus the world – and the soccer mom wins.

Everything in Peppermint is taken to cartoonish extremes. The setup in which Garner’s on-screen family dies in a drive-by shooting is prefaced by an obnoxious, saccharine perfection. It’s her daughter’s birthday, near Christmas, set at a carnival where everyone eats ice cream. Stereotyped Mexican drug dealers make their hit, and Garner goes into isolation to train for her revenge.

Peppermint defines only one kind of justice, and that involves a gun to the head

This movie exists in so many forms in so many different aesthetics. For whatever reason, 2018 seems inundated with them. The worst easily count Death Wish and Peppermint among their ranks. Hyper-violence takes things to an implausible limit, always with thin (or no) justification.

Questions of right or wrong slip into the background, Garner turning into a hypocrite. In the first act, she tells her daughter punching bullies makes her no better than the tormentor. In minutes of screen time later, she’s hanging three dead gang members from a Ferris wheel. How she got them up there is Peppermint’s lasting mystery.

Purely of its ilk, Peppermint glorifies and idolizes violence. It needs to exaggerate the corruption of the justice system, and the casting of the middle class white woman against stock, undeveloped, tattoo-sporting Mexicans is the worst of conservative-led paranoia. Without any sense of satire and playing the material straight, Garner recites the line, “What do I want? I want justice!” Peppermint defines only one kind of justice, and that involves a gun to the head.

Pierre Morel directs with an eye at capturing some ‘70s grindhouse merit. That’s a failure to read to the room – or the culture. Rather than ruminate on failures of the court system, Peppermint slides quickly into race-baited outbursts where social caricatures fight one another to the glee of those paranoid enough to buy into eye-rolling cable news headlines. The news though, that’s less sensationalized than Peppermint’s gory headshots. 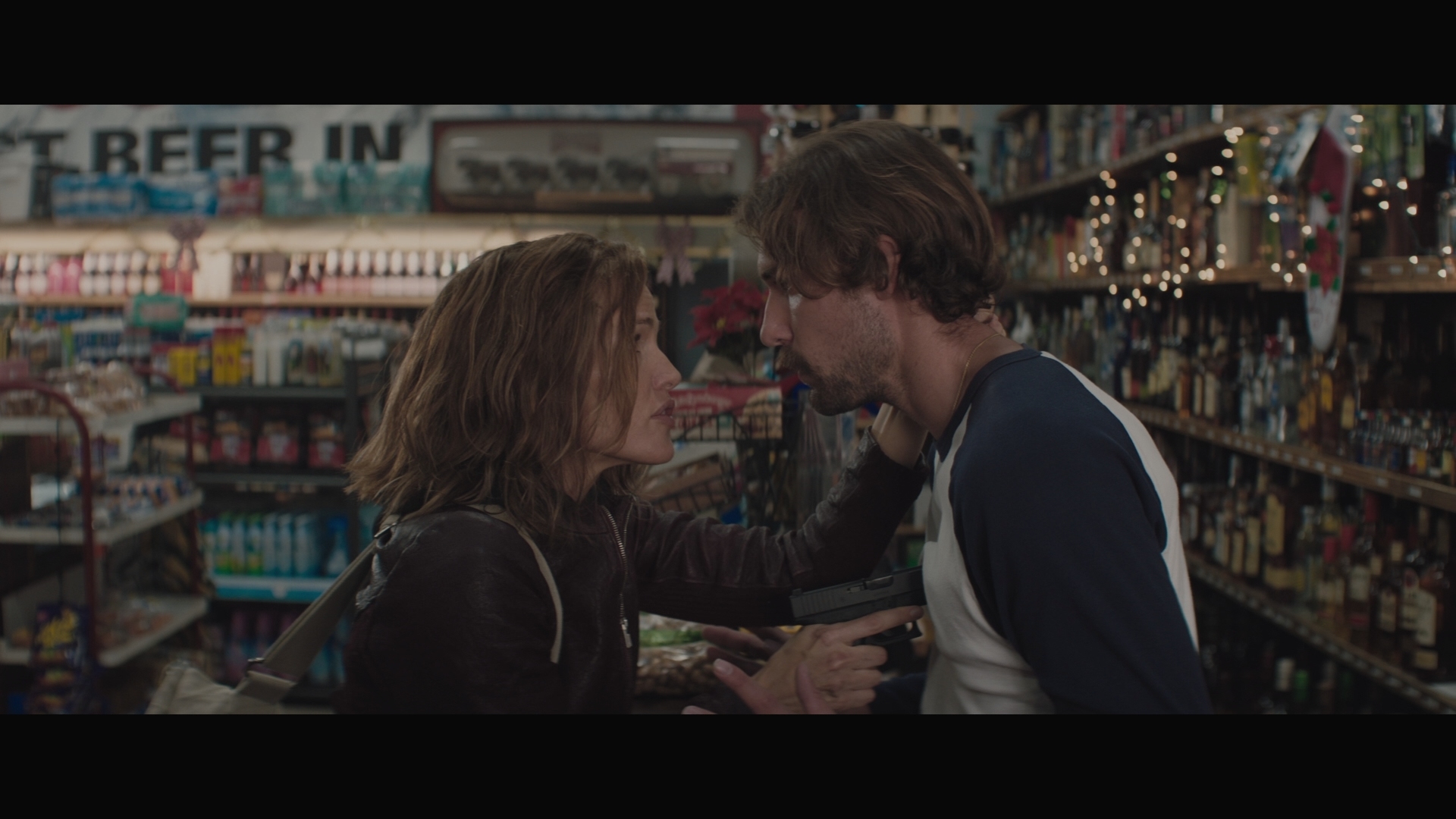 To match the ‘70s-like story, the visual plate of Peppermint dries out. There’s little to no black involved in the image. Shot primarily at night, the scenes become draped in a lacking gray. Depth is sacrificed in an attempt to mimic an aged style. Ignoring the subjectivity in the intent, the grays represent the source.

That choice however does invite pockets of noise. Shadows fill quickly with low light artifacts, obnoxious and irritating at their worst. Early on, Universal’s encode exhibits heavy banding and flickering, but that subsides. Compression appears to keep the noise controlled to not make it worse.

Matching the grayed out shadows is the color, recessed if with an appealing chill. Peppermint’s flesh tones don’t succumb to any egregious tinkering and primaries stand out. While hardly a colorful outing, scenes inside of a party store and convenience shop make for some saturated eye candy.

A few bombs go off during the course of action, hitting the low-end with considerable force. LFE support is otherwise routine, although those blasts do show off the available range.

With a 7.1 soundstage, Peppermint spreads gunfire between speakers. There’s plenty to go around too. Garner smashes a car into a house at one point, with great use of each channel to send debris around. Helicopters in the final act pan between the rears, opening the soundstage to enlarge the visual scope without actually seeing the choppers.

Dialog renders cleanly with no issues of balance.

Skip past the awful EPK Justice that runs a mere two minutes. If additional details on the production are of interest, then listen to the solo commentary from director Pierre Morel.

The 15 unaltered images below represent the Blu-ray. For an additional 13 Peppermint screenshots, early access to all screens (plus the 20,000+ already in our library), 60+ exclusive 4K UHD reviews, and more, support us on Patreon.