Harry Crumb (John Candy) chases down Helen Downing (Annie Potts) in this small time kidnapping caper. Potts is the villain, a sultry seductress who goes in on this scheme to snatch $10 million. She cares nothing for the men in her life – this is about cash. Perfect then for the late ‘80s, the era of Wall Street and greed.

The comedy is right too. John Candy, coming off genuine classics in Planes, Trains, and Automobiles and Uncle Buck, took the lead in Who’s Harry Crumb? while in his prime. Certainly, the script uses Candy for all it can; it doesn’t appear written with anyone else in mind. Who’s Harry Crumb? bounces between scenes, sometimes with little to no connective tissue, giving Candy the stage. He bumbles about, breaks stuff, injures himself, and generally acts like a doofus.

Too much of Who’s Harry Crumb? feels like a live stage show

At times, it’s hysterical. Candy can elevate any rote material, the type Who’s Harry Crumb? is stuffed with. A mixture of sight gags, pratfalls, and dumb guy dialog keeps Crumb a likeable character, even if he’s better fit for SNL skits. Too much of Who’s Harry Crumb? feels like a live stage show. As a P.I., Candy dresses in what now certainly causes offense with darkened skin and beards. That’s the ‘80s too.

Candy’s natural charms help elevate the inconsistency of these laughs. Who’s Harry Crumb? never decides on a style. At one point, a gag from Naked Gun is lifted wholesale, screwball comedy that isn’t parodying anything, just copying. Sexual innuendo drops in to lift a potentially family friendly veneer. Smash-and-bash laughs turn Candy into an invincible force of nature, a living cartoon that doesn’t align with anything else in Who’s Harry Crumb?.

It’s not difficult then to figure out why Who’s Harry Crumb? generates laughs unpredictably. A 50/50 success rate isn’t a total loss for a comedy, but Candy’s resume is superb. Who’s Harry Crumb? sits somewhere in the middle, a lagging, middling, and muddy comedy that’s glancing Candy’s talents without absorbing them as a whole. Forgettable as a whole, but memorable in pieces. 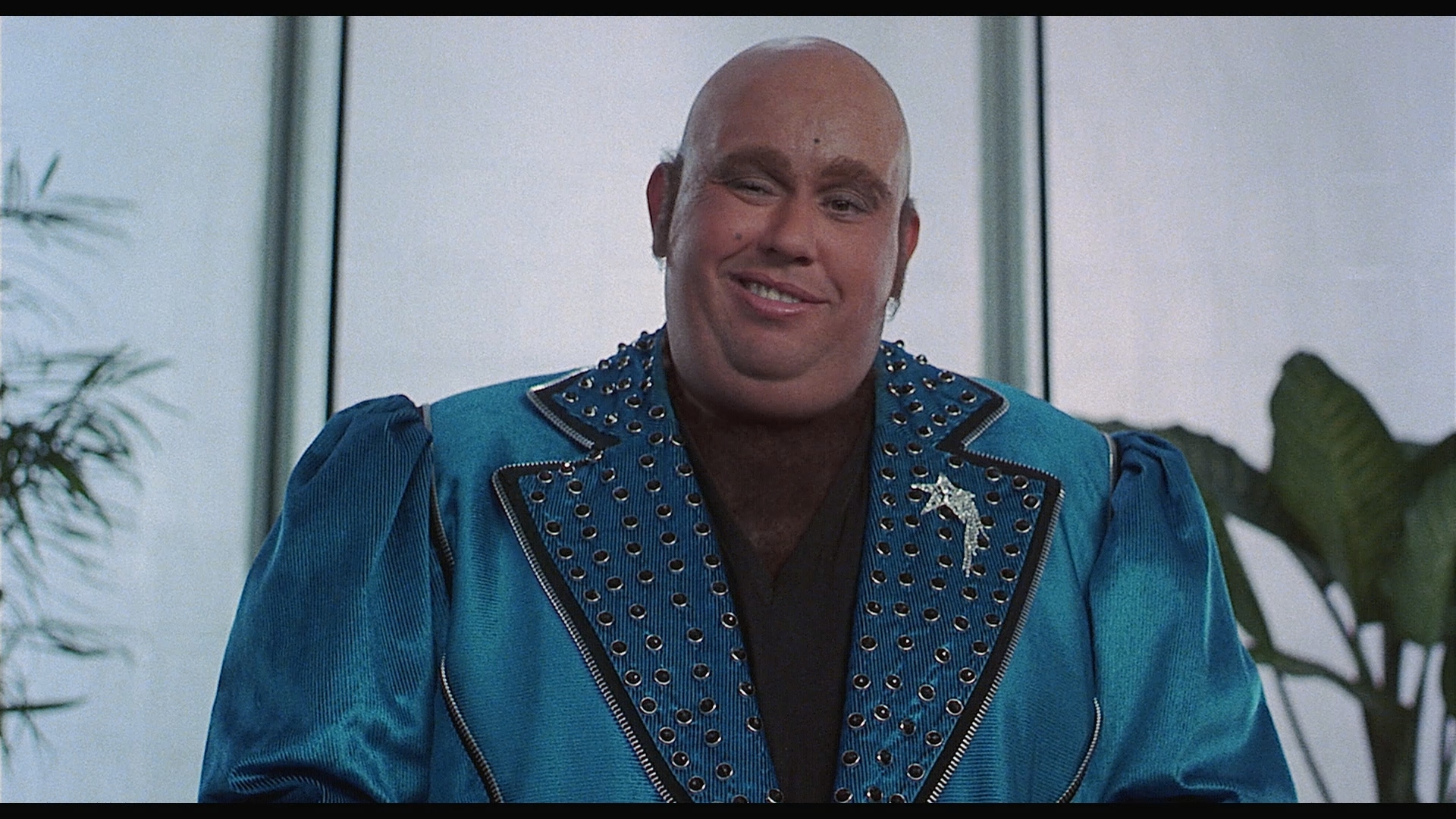 Muck. That’s what appears on screen when viewing this disc. Who’s Harry Crumb? takes a hit from an avalanche of issues. Take the print, with its selection of dirt and scratches. It’s choking on age, screaming for any level of clean-up.

Mastering won’t help. Grain elevates excessively. That’s thanks to obvious signs of edge enhancement, leaving halos everywhere. To dampen things, a level of noise reduction is applied, giving every frame of Who’s Harry Crumb? a smeary look. Detail crushes, mucking up each shot. Whatever detail was left in this print is lost thanks to the processing.

Time and manipulation doesn’t rob the print of its color. Hearty primaries stand out, mostly because the rest is so dire. A red car and green overgrowth on homes push saturation to its limits. Contrast gets the assist, bright, and nearing a tipping point. Black levels counter nicely. If there’s a positive, it’s depth. The rest is a loss.

The score fares better, even if the highs wobble and bass is absent. Channel separation spreads only a touch, a small stage with limited space.

Who’s Harry Crumb? boots right to the movie. There is a menu, but it lies empty with no options other than playing the feature.

John Candy can carry the the inconsistent material of Who’s Harry Crumb?, but even he’s not enough to bring this up to a high standard.

The 15 unaltered images below represent the Blu-ray. For an additional 15 Who’s Harry Crumb? screenshots, early access to all screens (plus the 20,000+ already in our library), 60+ exclusive 4K UHD reviews, and more, support us on Patreon.