Love is mightier than power, so says Krull. It also says that love, when on fire, holds more might still.

This adventure sees Ken Marshall’s Colwyn travel across the planet Krull in search of his princess, as medieval fairy tale as it gets. This one has lasers though. And it’s in space, in a galaxy with two suns.

Krull firstly comes from a place of marketing. Star Wars was finishing up soon by the time of production in 1982. Conan did as well the same year. Here’s the studio-born lovechild of the two. Unfortunately for Krull, it’s missing intangibles. Neither philosophical like George Lucas’ planetary saga nor beefy and muscular like Schwarzenegger’s comic adaptation, Krull limps toward its conclusion.

The hodgepodge of gorgeous scenery, James Horner’s elegant score, and lavish visual effects never come together. Scene-by-scene, it’s as if the wild aesthetics never settle on consistency. Marshall lacks the leading man character, jolly and cheery as he assumes his new role as king. A subplot concerning his Colwyn too young to be a ruler never goes anywhere. His lover Lyssa (Lysette Anthony) can do nothing other than mope about a fortress, waiting rescue. Even by the decade’s standards of damsels, Lyssa ranks near the bottom, utterly incapable of action.

Her all-male rescuers trudge through swamps, forests, and mountains to reach Krull’s castle. It’s a massive undertaking, overlong and without the necessary tight edits. Home studio Colombia wanted their money shown, so Krull makes use of every exterior, set, and landscape available.

Walking away from Krull means doing so dissatisfied. The climatic conflict between Colwyn and the 30-foot tall Krull is hardly a fight at all. Colwyn wins round one by use of a magic Glaive, round two by using the power of romance. Krull opens with mention of warring kingdoms; by the end then, it shows the might of a universal feeling. Cute, but routine. Visualizing that as a static brawl of dueling fireballs isn’t enticing.

To its credit, Krull does feature a number of glossy effect scenes. A stop motion, crystalline spider is especially effective, as is the webbed lair. Miniatures build an alien world, although a comedic relief character (David Battley) strangely knows how to turn into Earthen animals like a tiger. Apparently, Krull is not a planet of distinct wildlife – or distinct story ideas. 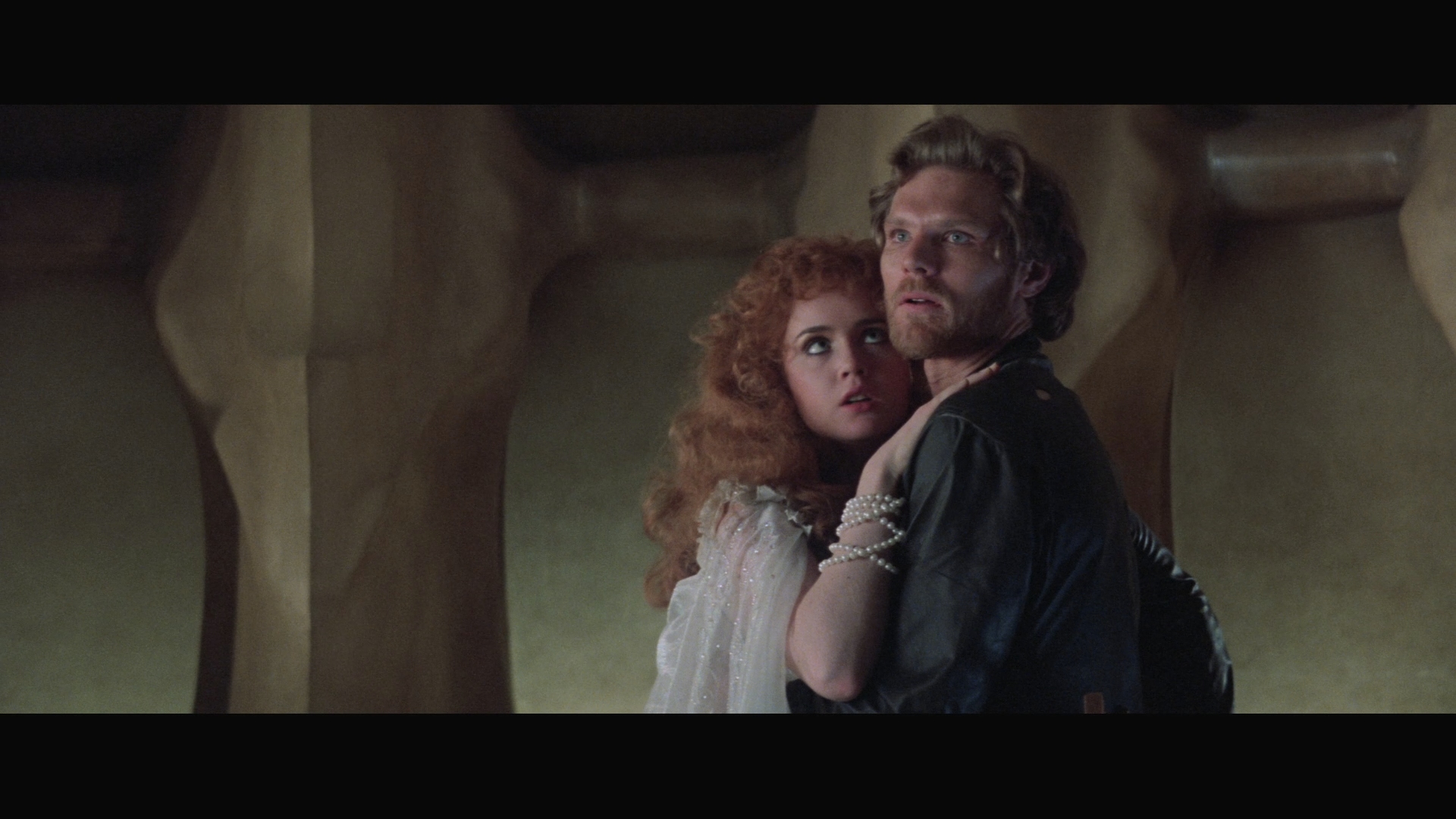 Notable from the outset is a grand contrast. Two suns creates plenty of light apparently. Sun glances off mountains and livens up Krull’s images. Even in drearier moments from the alien castle’s interior, there’s no loss of brightness. Black won’t reach a comparable depth, yet they don’t need to; contrast is enough to hold them up.

It’s a nice looking master too, rich in textural detail from a high-res source. Landscapes drench the screen in detail. Costumes exhibit pleasing definition, and the various make-ups and miniatures show off the work involved. A consistent level of grain (held back from artifacting except in some shadows) keeps everything suitably filmic. Work on the print maintains a damage-free appearance. That goes for the matte and blue screen effects too.

Set in a multitude of natural environments, color livens up. Greens spread wide, and a trek through quicksand produces a pleasant earthy brown. Where things work best is inside Krull’s castle, where the demonic style invokes eerie reds and greens. Saturation gives Krull plenty of zip.

Were it not for a few quibbles, Krull’s fantastic DTS-HD mix nears vintage perfection. Precise dialog and clean highs represent the best possibility fidelity of this time. Even the bass keeps itself together, without loss. A great James Horner score belts out from the stereos with sensational depth.

In 5.1, the mix adds space too. The Glaive sweeps around the soundstage before the title card and the alien ship rolls in from off-screen from the left rear. Laser effects bounce around, horses travel through the soundfield, and ambient winds track between channels.

There’s inconsistency in applying the .1 effects though. Some scenes like a rock slide early on sound almost too beefy for the shots in question. Later as Krull attacks, there’s nothing to notice, as if the sub died. Later, some of the highs stretch things too far, gritty and obnoxious rather than epic as intended. As an overall mix, this is great however.

Mill Creek supplies a menu, you supply the extras… on YouTube because there’s nothing included on disc.

Krull doesn’t have an original idea under its hood, but the visual effects and scenery have enough value to stave off total boredom.

The 15 unaltered images below represent the Blu-ray. For an additional 27 Krull screenshots, early access to all screens (plus the 20,000+ already in our library), 60+ exclusive 4K UHD reviews, and more, support us on Patreon.