Original Mono For Frosty The Snowman

Coming off the success of Rudolph the Red-Nosed Reindeer in 1964, Rankin-Bass became the go-to company for holiday broadcast specials aimed at children in the 1960s and 1970s. Prominently known for their trademark Animagic brand of stop-motion puppetry, they also produced traditionally animated Christmas specials.

Rankin-Bass’s indelible legacy and lasting cultural impact were cemented forever when Frosty The Snowman aired on CBS in 1969. The 30-minute animated special quickly became an annual television staple for millions of children, joining the company’s earlier Rudolph special as part of the great, American Christmas tradition.

Frosty the Snowman has become a permanent fixture around Christmas time. The iconic character has been heavily merchandised like other beloved brands, providing a warm glow of childhood nostalgia. I’ll admit there may or may not be a six-foot inflatable of the friendly snow creature in my front-yard every Christmas season. It’s amazing that a cartoon produced in the late 1960s remains a popular draw even today. The special continues to garner high ratings each year on CBS, proving its timeless appeal across generations.

Frosty the Snowman is a simple child’s story told with wit, humor, and love

Based on the huge Christmas hit song made famous by Gene Autry, Frosty The Snowman’s heartwarming storytelling and lovable characters make it a perfect slice of childhood fun and warm nostalgia. Sung and told by performer Jimmy Durante, we learn the story of a snowman who comes to life when a young girl places a magical hat on him. Karen quickly becomes Frosty’s friend. She helps Frosty find a colder place to live before he melts away.

Memorably voiced by comedian Jackie Vernon, Frosty can’t handle warmer temperatures. The snowman decides the North Pole would be a great home. It’s a simple child’s story told with wit, humor, and love. Frosty, Karen and their rabbit friend Hocus Pocus are on the run from the evil Professor Hinkle as they all make their way north on a train.

The Rankin-Bass team truly made another all-time Christmas classic with Frosty The Snowman. Romeo Muller also wrote the Rudolph special and works his magic once again within the constraints of television aimed at school children. He crafts a moving story with a couple of unforgettably touching moments. Composer Maury Laws provides an integral part of the cartoon’s music. The soundtrack is filled with a delightfully joyous tone, perfect for Christmas.

The distinctive designs from noted artist Paul Coker Jr. stand out from the animation of its day. Producers and directors Arthur Rankin, Jr. and Jules Bass wanted the special to look like a Christmas card, thus hiring the most famous Hallmark artist of the period to design the characters and backgrounds. 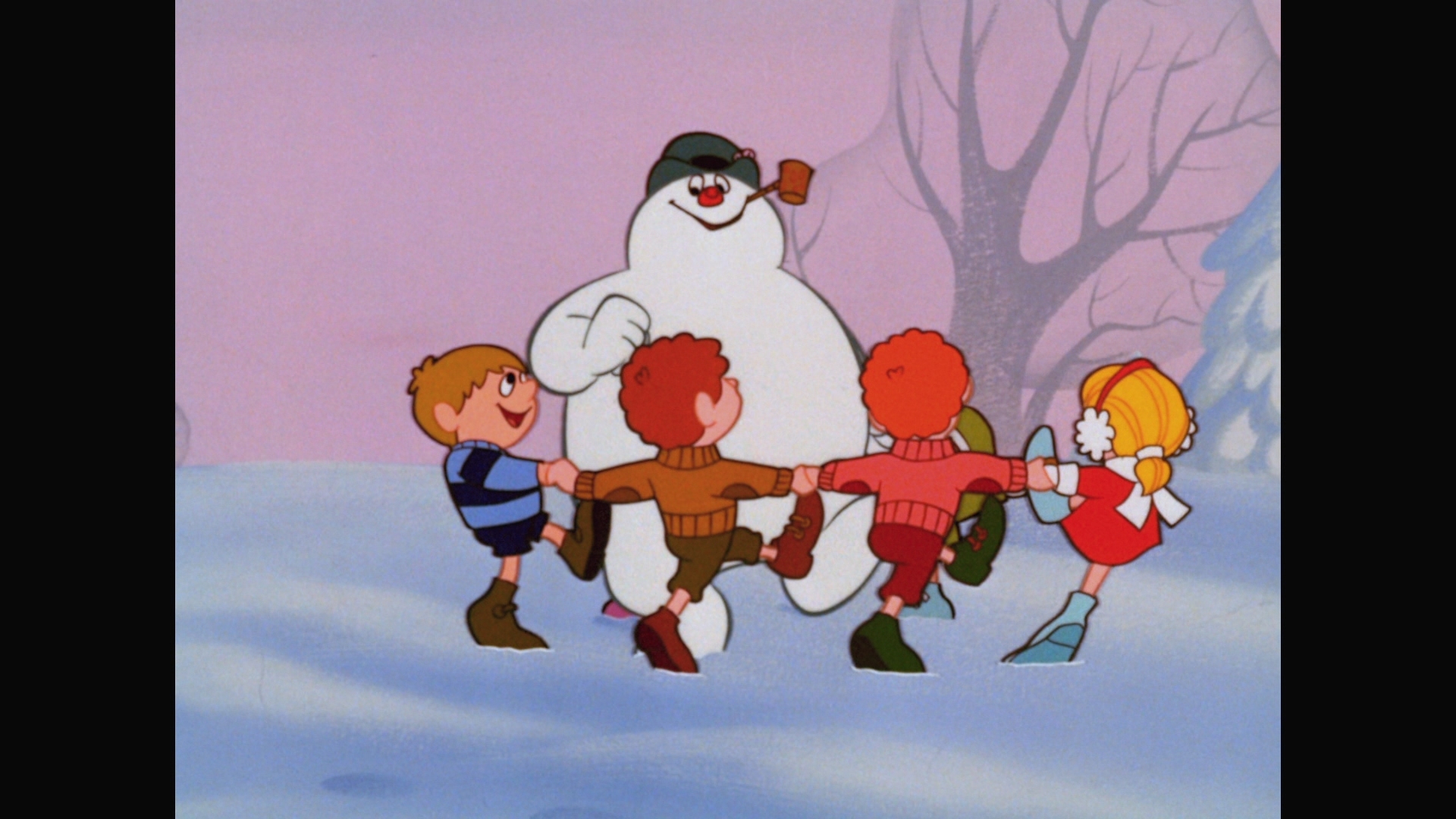 Universal presents Frosty the Snowman at the expected 1.33:1 aspect ratio at 1080P resolution, in line with earlier Blu-ray releases. The main feature runs an uncut 25:44 minutes on a BD-50! That leads to an impressive AVC encode well into the 30s that perfectly renders the older cel animation and its grain structure. A Universal logo pads the normal running time. The 1969 animated special looks fairly crisp and clean in HD, though well behind the animated theatrical fare of its day. This was a television special and its production values were decent, not spectacular.

Rudolph definitely received improved video quality in Universal’s The Original Christmas Specials Collection. It’s harder to definitively say that Frosty The Snowman looks better than prior Blu-ray versions. Some filtering has been used on the film scan. It’s not terribly detrimental to the cel animation’s integrity, but animation videophiles will notice the cleaned-up cels.

There is remarkably little dirt or debris on the print, the elements have been well-preserved and kept in fine condition. Primary colors are highlighted, especially red. The color red really pops in this transfer. It’s not a radical tweak to the color timing. If anything, white looks a bit flat. The contrast and black levels are fairly high for classic cel animation, though less impressive than the fully restored Looney Tunes shorts.

Inspired by Paul Coker Jr’s distinctive art, Frosty The Snowman has a distinct aesthetic for classic cel animation with line thickness that changes for certain characters. The program was actually animated in Japan by Mushi Production, also responsible for Astro Boy. Rankin-Bass were always looking for foreign studios that could do quality work on the cheap when making their specials. It’s a testament to their craftsmanship that the special continues to delight children to this day.

This Frosty the Snowman release has the original post-1970 mono audio for the first time on Blu-ray. It also includes a decent 5.1 remix used on the prior Classic Media releases. The rare, original audio with June Foray voicing Karen is still nowhere to be found. Her recording was used when Frosty The Snowman first aired in 1969 and was replaced at some point in the 1970s by a child voicing Karen.

While the 5.1 DTS-HD MA soundtrack is superficially more impressive, a ton of noise reduction has been applied to remove hiss, sucking out some of the richer harmonics and dynamics in the recording. By comparison, the original 2.0 DTS audio in mono has been left untouched and unprocessed. It has more life, even if the recording sounds a tad rougher in the upper frequencies. Cartoon purists should hear the mono audio, while more casual viewers may prefer the glossier 5.1 remix with a bigger soundstage.

Music helps make Frosty The Snowman more than just another Christmas cartoon. Comedian Jimmy Durante was a popular performer in the 1940s and sold millions of records, even if his music is largely forgotten today. His gravel-voiced rendition of the titular song is an inspired take on the hit made famous by Gene Autry. He re-recorded the song for this special, having released an earlier cover.

This isn’t Frosty The Snowman’s first go-around on Blu-ray. Classic Media issued Frosty back in 2010, then as a 45th Anniversary collector’s edition, while Universal handles it this time. Universal has released a solo deluxe edition and Frosty The Snowman as part of The Original Christmas Specials Collection set. The latter two discs are identical, hence this review works for both versions. The Original Christmas Specials Collection is a 4-disc Blu-ray set packaged in a keepcase inside a slipcase.

This new 2018 edition from Universal is missing the three largely inconsequential featurettes found on Classic Media’s 45th Anniversary collector’s edition. They were aimed at children for the most part and their absence isn’t a big loss.

If you are looking for the original audio recording with legendary voice actress June Foray voicing Karen, that is still missing in action. We know the audio exists because Rhino issued it on CD many years ago, but it has never turned up on DVD or Blu-ray.

The Animagic World of Rankin/Bass (47:00 in HD) – This fantastic new documentary on the beloved animation company is absolutely worth the price of buying Frosty The Snowman over again. Everyone from animation expert Jerry Beck, to director Jon Favreau, and many other active Hollywood filmmakers involved with animation, discuss the impact and legacy of Rankin-Bass. They cover writer Romeo Muller, Maury Laws, and other people behind the scenes that helped produce their wonderful holiday specials. It’s a fascinating snapshot and overview of the company’s lasting legacy. On a side note, well-known Rankin-Bass historian Rick Goldschmidt was left out of this documentary for whatever reason by the producers. It’s a shame he wasn’t included, but he’s now gone around the Internet all over social media trashing this release. This is a great look at Rankin-Bass even without his presence.

Original Pencil Test (01:04 in HD) – An original, audio-less clip which has the raw, rough drawing made for Jimmy Durante’s character in Frosty. It has limited movement and was meant as a prototype for the animators.

The beloved children’s animated special Frosty the Snowman looks and sounds better than ever in this new deluxe edition.

The unaltered images below have been ripped from the actual Blu-ray. For an additional 15 screenshots taken from Frosty The Snowman, early access to all screens (plus the 19,000+ already in our library) in full resolution, dozens of exclusive 4K UHD reviews and other perks, support us on Patreon.