Everything in a small Texas is perfect until a ruffian biker gang and those darn scientists moved in. Now it’s up to Chuck Norris to clean up. Slowly. Regrettably.

The general premise of Silent Rage is sticking then martial arts star Norris against an invincible man engineered by mad science. Simple. But Silent Rage’s woeful attempts at tension, mirroring shots from Halloween, drain any excitement or thrills.

Consider the masculine attitude. Norris aggressively courts an ex (Toni Kalem) who exists in this story to go topless, run, scream, and serve her male master. Most of the women earn roles for their willingness to undress. Few won’t in their screen appearance.

Feeble men won’t live to see the end. That hippie moralist? He’s doomed. Into art and photography, he doesn’t belong. Stephen Furst co-stars as a blubbering deputy. Furst has to give an arduous monologue about how he killed a puppy as a kid. It means nothing, other than to show remorse and that’s not allowed in Silent Rage. That’s not manly enough. A dozen bikers causing mayhem in a local bar? Punchable goons, and to no consequence of the greater story. Norris takes them all on alone because the movie needed an action scene.

Norris spends a chunk of Silent Rage shirtless or pointing a gun at the screen. Maybe both, but the movie is all too easy to tune out. That big Texas attitude is a preview of Norris’ future career, even if no one knew so at the time.

Silent Rage’s promises never come to fruition. Typically, this is a merely spiteful endeavor, critically eyeing the progress of science. Research created a monster resistant to bullets, terrifying everyone in this second amendment-waving escapade. There’s no character to the rampaging John Kirby (Brian Libby). He doesn’t speak. Roaming the streets and finding himself in convenient circumstances, he smashes heads to establish his lone personality trait. The rogue scientists who created him with chemical injections? They don’t do much either, short of recycle tropes established 50 years prior in Universal’s Frankenstein, down to the grungy lab set.

Of course, this leads to a climactic showdown. The obnoxious synth score shuts off, leaving only the grunt of Norris and Libby as they punch and kick through a wonky piece of kung-fu. Mostly, they roll around. A deus ex machina solves the problem, Norris dumping the genetic anomaly into a well. That makes no sense as Libby survived a 10-story fall from a hospital window minutes earlier. The insinuation is that Norris’ brute strength and macho punches were enough to take down even science’s greatest. Note: It wasn’t. Silent Rage ends on sequel bait. Mercifully, there wasn’t a follow-up. 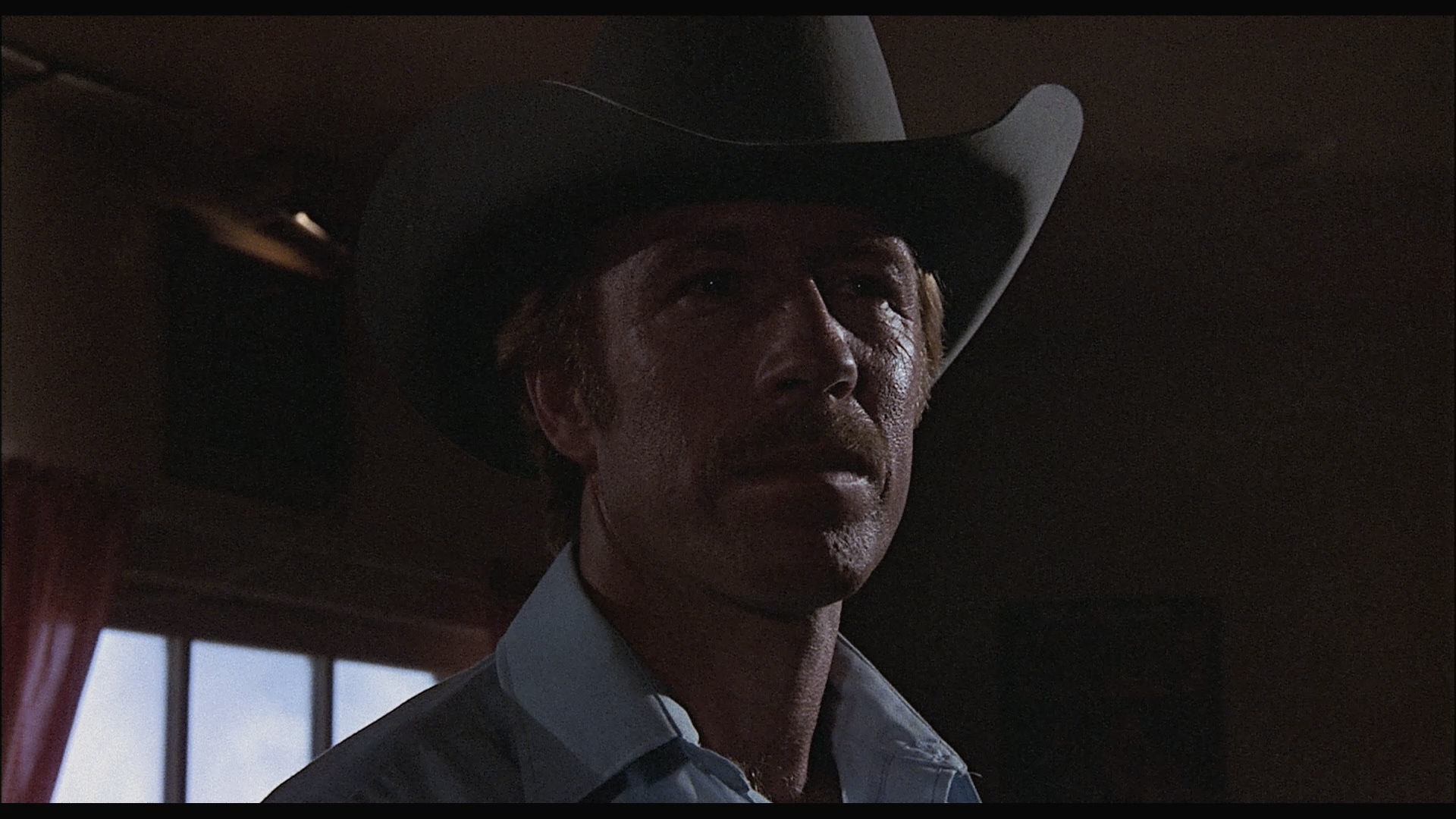 High contrast edges harden. Many include lingering halos. Edge enhancement only exacerbates the grain to which this encode struggles to handle.

Despite roughness evident in the video, this DTS-HD track is fine. While there’s little to the dynamics because of age, overall fidelity stays high. Crisp dialog and stability even as the score reaches an irritating electronic crescendo is impressive.

There’s little in the way of stereo effects other than the score. In the opening credits, the music bounces between the fronts. After that, Silent Rage effectively becomes a mono mix.

Nothing, but there is a menu at least. That allows viewers to turn on subtitles.

Chuck Norris meets a Frankenstein monster in Silent Rage, but that concept isn’t executed with the same audaciousness as the concept.

The 15 unaltered images below represent the Blu-ray. For an additional 19 Silent Rage screenshots, early access to all screens (plus the 19,000+ already in our library), 60+ exclusive 4K UHD reviews, and more, support us on Patreon.