Now reissued as part of an expanded commemorative edition timed to coincide with the new live-action Aquaman movie starring Jason Momoa, Throne of Atlantis gives us the template for what a solid Aquaman blockbuster may look like. Matt Lanter voices Aquaman alongside a star-studded voice cast.

Supposedly based on comic book scribe Geoff Johns’ New 52 Aquaman’s run, Throne of Atlantis introduces the aquatic superhero’s entire supporting cast. Mera and Ocean Master receive most of the screen time in the Shakespearean tragedy that is Arthur Curry’s life.

Arthur Curry is raised by his human father, unaware he’s half-Atlantean and the queen of Atlantis’s bastard son. Soon he will learn of his destiny and embrace Atlantis with the aid of the beautiful Mera, a fierce warrior sent by Arthur’s mother to protect him. Familiar Aquaman villains like Ocean Master, his evil half-brother, and Black Manta have roles in the conflict.

… an action-packed, slick superhero movie that just happens to be animated

Justice League: Throne of Atlantis has the dual purpose of telling Aquaman’s origin while also introducing him to the Justice League proper. The superhero team plays a big role in the movie and all of the team’s famous characters play a part, especially when Orm decides Atlantis needs to go to war with the surface world. Superman, Batman, Wonder Woman and the rest of the Justice League must band together as they face off against the warmongering Orm and his army of sea creatures.

Somehow a complete and satisfying story is told within the typically short animated direct-to-video timeframe, clocking in around 72 minutes. That brevity trims the fat from the narrative, focusing on action and just enough character building. It’s a pleasant, economical superhero adventure that serves the underwater superhero well compared to prior animated adaptations.

Justice League: Throne of Atlantis is constructed and conceived as a Hollywood blockbuster, freed of budgetary limitations by the possibilities of animation. That makes it an action-packed, slick superhero movie that just happens to be animated. You’ll definitely think differently about Aquaman if all you know about the character are pop culture references and the Super Friends. Mera is pushed to the front in this adventure; she’s practically a co-lead. I would suspect her large role carries over to the forthcoming Aquaman movie. 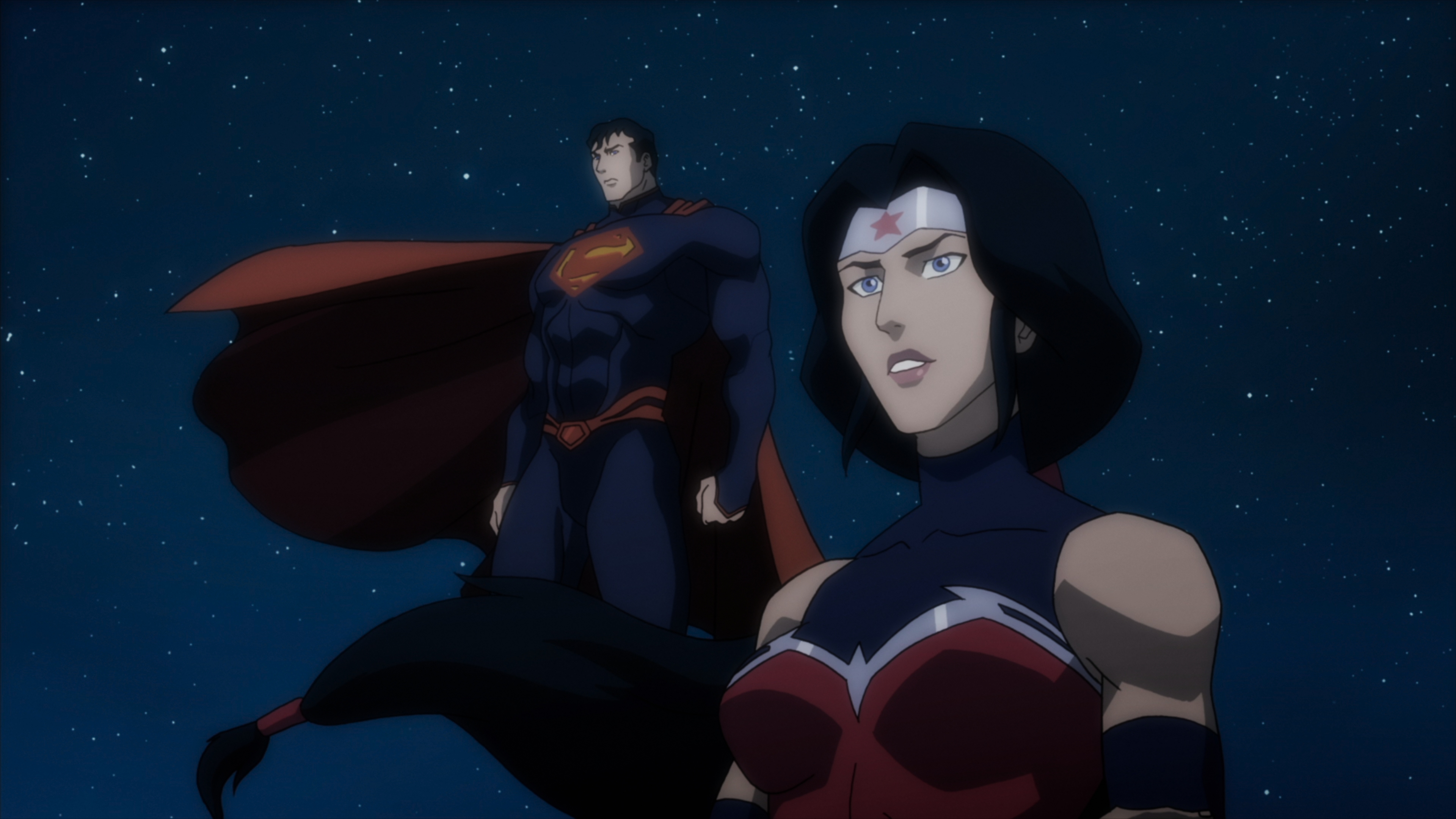 The HDR pass gives Throne of Atlantis plenty to play with. Shots of Atlantis and its many dazzling lights show the format’s abilities. Lightning beams, bullets, and other elements likewise pop. Explosions become one huge ball of vividness, backed by great shadows. Range excels here.

That’s for the best. Not much else does. The extensive banding must be part of the source because this simple-looking material cannot be challenging an encode on this format. Nearly any background shows artifacts, and even on characters themselves.

Sagging resolution (paired with a slight bloom) doesn’t give the UHD an appreciable boost over the Blu-ray. In terms of sharpness, the two formats exhibit minimal difference, with a near imperceptible edge to the 4K presentation. Any flaws in the source material stick out, especially some murky mid-range images.

It’s fine, and those HDR effects do stick out, but it’s a lowly effort.

It’s interesting that WB picked this animated DC movie to hit UHD in 4K resolution. The animation employs a lot of lighting effects and has shading peculiarities, especially in the underwater Atlantis scenes. Meant to simulate the wavy appearance of water, the effect mostly weakens the animation’s native picture quality in terms of sharpness and clarity. Justice League: Throne of Atlantis was never one of the better-looking efforts from WB Animation for their DC line-up and this release does nothing to change that.

The 72-minute main feature receives a less-than-serviceable AVC encode on a BD-50. I have no reason to believe this Blu-ray presentation is any different than the one found on the original BD. It is rife with banding and other possible compression issues. To be fair, some of the banding is possibly baked-in by shoddy animation techniques. The animation’s video quality largely resembles other animated DCU films from recent years. The 1.78:1 presentation has a bright, bold palette. A nice contrast and decent black levels make up for some of the banding issues.

One of the more impressive things about Throne of Atlantis is its excellent score and fine surround mix, even if the immersive audio is largely confined to discrete action upfront. The 5.1 DTS-HD MA soundtrack has nice balance across the soundstage and perfectly intelligible dialogue. Bass and directional cues play a much larger role in the underwater scenes. The mix doesn’t have the same impact and expansive dynamics of theatrical fare, but provides a fine sound experience.

Justice League: Throne of Atlantis already received a loaded Blu-ray edition back in early 2015. This “commemorative edition” brings over those special features and adds a couple of new previews for other animated DCU movies, not to mention a new commentary. It’s primarily a reissue with a few new extras timed for the release of the upcoming live-action Aquaman movie.

This 4K UHD edition also includes a Blu-ray copy and a Movies Anywhere digital code that does give 4K digital rights if redeemed on MA itself. A slick slipcover with new artwork is available on first pressings.

Aquaman: The New King (14:50 in HD) – A new featurette with writer Heath Corson and DC All Access host Hector Navarro, among others, discussing Aquaman’s evolution throughout the years into finally achieving his own live-action movie. It covers the reception to SuperFriends and his various changes over the years in all mediums.

Villains of the Deep (11:33 in HD) – This entertaining featurette goes into the biographical details for Aquaman’s primary villains, Black Manta and Ocean Master.

Scoring Atlantis: The Sound of the Deep (30:05 in HD) – An extensive mini-documentary with composer Frederik Wiedmann, producer James Tucker, recording engineer John Rodd, and conductor Russell Steinberg explaining the process behind developing the movie’s score. Easily the most involved and elaborate featurette ever included with an animated DCU movie.

Robin and Nightwing Bonus Sequence (03:50 in HD) – Producer James Tucker introduces this “lost” scene that was meant to lead into Batman Versus Robin. The two heroes team up in a fight scene against Scarecrow.

A Sneak Peek at Reign of the Supermen (09:33 in HD) – A preview of the next animated DCU movie which follows up the events depicted in The Death of Superman.

Constantine City of Demons Trailer (02:03 in HD) – Plays before the main menu.

Aquaman Trailer (02:34 in HD) – The long trailer for the new movie with Jason Momoa also plays before the main menu.

Trailers (03:15 in HD) – Trailers for The Death of Superman and Teen Titans Go! To The Movies can be picked from the menu.

Bonus Episodes From the DC Vault:

Full disclosure: This UHD release was provided to us for review by the label. For information on how we handle all review material, please visit our about us page to learn more about DoBlu’s editorial policies.

A possible animated preview of Aquaman as serious superhero, Throne of Atlantis is reissued right in time for his big-screen adventure.