Few summer blockbusters appeal to film buffs, and then there’s Mission: Impossible. Practicality and Tom Cruise’s questionable non-commitment to safety creates faultless screen action. Implausible, yet shot with an artistic elegance. The camera moves through slivers of space in traffic, pans alongside speeding vehicles, jumps overhead between rooftops, and dangles over a mountainside.

In Mission: Impossible – Fallout’s case, it’s performed with dazzling balance. Scenes of tension intertwine with shoot-outs. It’s a snappy, well cut story involving lost plutonium and nuclear warfare. This is a catalyst for Ethan Hunt (Cruise) to cap off a number of dangling Mission: Impossible storylines, threaded through a morality story.

Mission: Impossible – Fallout is more than its budget

It takes an enormous level of twisting to reach a sensational, IMAX-scale finale. One key scene in the bowels of London features no less than six crucial swerves, leaving little time to process if they make sense. Maybe they don’t, but they do progress Mission: Impossible – Fallout’s speedy plotting.

Exposition is needed en masse to get anywhere, yet Mission: Impossible – Fallout never feels bogged down or at a sacrifice of character. By way of the previous five Mission: Impossible’s, Fallout banks on their work. Fallout feels like a finale. There’s closure (however unlikely it is to remain so).

This is the new apex of the series, transforming fully from a sneaky smart intro chapter into an action series a cut above Fast & Furious terms of plausibility. Ethan Hunt doesn’t punch a torpedo, but he does survive a helicopter crash, last second parachute opening, and a tense bathroom brawl. Unlike the entertaining dopiness of the rival action series, Mission: Impossible – Fallout uses a different tier of cinematic class. There’s bravery and guts to these angles and movements, distinct in their POVs and hyper-creative in breathing life into staples like car chases. Even a foot chase upends the norms, and Hunt’s race across sightly Paris rooftops makes total use of the scenery to drive energy into the sequence.

Embedded in the action is a pervasive tension, a sense that maybe Hunt doesn’t reach his goal or Benji’s (Simon Pegg) technical acuity will reach an unwanted apex. Mission: Impossible – Fallout is more than its budget; there’s skill on showcase, the best action minds collected onto a single project. And, because of their professionalism, Mission: Impossible – Fallout is nearing a mistake free output. 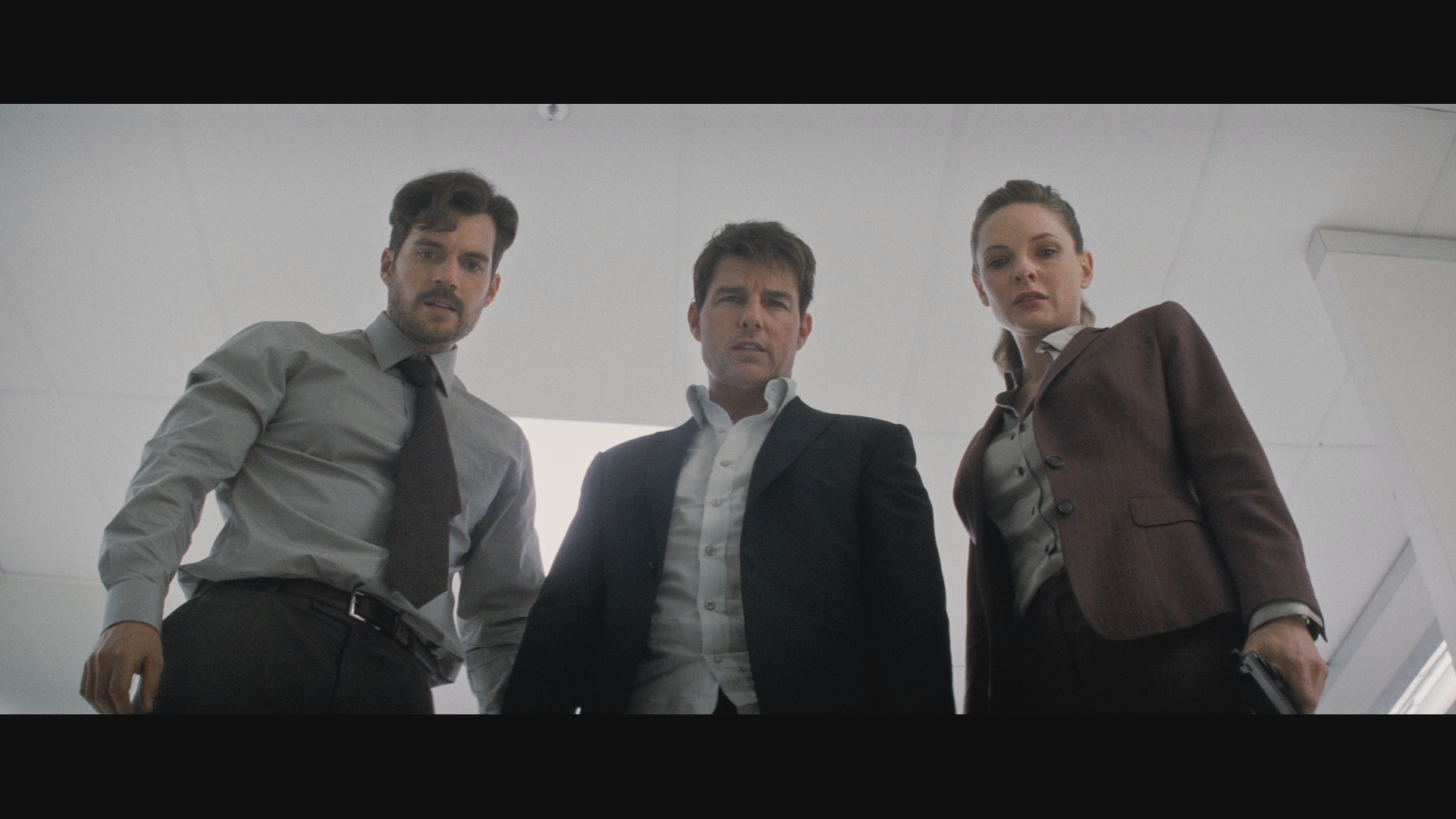 The finale, a dazzling helicopter battle amid a mountainous area, is presented at the full IMAX ratio with all the clarity and sharpness expected of a scene this grand. No other part of Mission: Impossible – Fallout looks this good or this sharp. The difference is remarkable, especially as the scene cuts to the 35mm, 2.35:1 on-foot shots. Texture on rocks and long views of the region exhibit ludicrously perfect definition, using the full breadth of 4K’s capability.

Everything else looks like no other Mission: Impossible before. New cinematographer Rob Hardy leaves his mark. His style is… well, it’s style. Much of Fallout uses a prominent, thick grain structure. Paramount’s encode doesn’t struggle in any capacity. It holds, processing some coarse images.

Black levels will frequently avoid true black. Some crush is invasive too. Softness reigns over sharpness, choosing to dilute fine detail and texture. Close-ups inconsistently convey facial definition. Establishing location shots show clarity if not pinpoint resolution. All of this fails to reach the laudable heights of previous Mission: Impossible outings on Blu-ray, yet establishes a visual look that defines Fallout. It’s darker, heavier, and dirtier.

What most impacts Mission: Impossible – Fallout’s is color. The era of orange and teal slipped away. Now, it’s about peach/orange contrast. Garish use of orange slips into the image. Pay attention during the motorcycle chase where the buildings and skyline of Paris take on a ghastly, unnatural hue. This isn’t only a case of personal preference; contrast erodes. The brightest areas of the screen fail to reach pure white. It’s worse in Dolby Vision than standard HDR when in direct comparison, although both exhibit the same limited depth.

This doesn’t mean a total loss. Light sources when in a club strobe with intensity. Lens flares shimmer with force. When the sun reflects from a car, that burst of light is powerful. Overall, Mission: Impossible – Fallout exhibits diminished bite. All of that comes down to style.

Although the high-end action scenes take place during the day, contrast remains flat. That’s on the color grading, skewing toward orange and sapping the energy. Pure white is rarely employed.

Closing scenes (and switching aspect ratios) bring all of this together. On foot scenes stay at 2.35:1, with heavy grain and dimmed brightness (and some moments of aliasing). That’s up against IMAX material, rich, contrasted, and sharp. Detail thrives. It’s reference quality whenever the camera cuts to helicopters in battle.

Enormous LFE support accentuates the score’s power. There’s strength in the background audio too, as a party uses thick music, even into the bathroom; bass continues to pound and rise based where characters fight in the room. An airdrop through a storm features a room-altering jolt of thunder. Each vehicle chase amps up the engines. By the time Henry Cavill is hoisting up a machine gun, the low-end pounces to its maximum.

There’s no loss of direction in all of this. The critical bathroom fight uses closing doors for tension, separating the slam of metal hinges into appropriate channels. An early gunfight under a bridge sends bullets and debris through the soundstage, with an additional echo to match the scenery. Cars pan the screen and speakers in tandem, flawless in their motion. There’s vibrancy in this sound design reserved only for these mega-blockbusters.

Shared by the UHD and Blu-ray, three commentaries offer way more than most new releases anymore. Director Christopher McQuarrie pairs with Tom Cruise on one and editor Eddie Hamilton on another. Composer Lorne Bolfe sits alone on the third, and his score is featured in isolated form. The last time a new release featured an isolated score? Well, it’s been a while.

An additional bonus disc begins with the seven-part making-of, running 53-minutes, titled Behind the Fallout. Some of this veers promotional and toward plot recap, but there’s a slew of set footage to offset. A short set of deleted scenes includes an elaborate extension of the club scene, while letting McQuarrie and Hamilton explain the edit.

A breakdown of the music used in the foot chase lets Bolfe commentate, pointing out how the mixture of instruments plays a role. It’s like a visual effects breakdown, but with the score. More please. The Ultimate Mission runs three minutes, collecting footage of the action scenes/stunts while Cruise narrates. It’s mostly an ad. Storyboards and trailers finish things up.

The 15 unaltered images below represent the Blu-ray. For an additional 22 Mission: Impossible – Fallout screenshots, early access to all screens (plus the 19,000+ already in our library), 60+ exclusive 4K UHD reviews, and more, support us on Patreon.