This Town’s a Zoo

Every ounce of Critters is derivative. It’s a prototypical small town monster movie (in this case, middle America Kansas) where the police force is made up of two people, every one knows each other’s names, and alien monsters decide this is where they’ll land.

It’s chintzy, small, and frequently unoriginal, but Critters has remarkable heart. Out of the small deluge of “tiny creature” movies that spawned post-Gremlins, Critters is the best of the lot. There’s plenty to digest, and that generic quality is superseded by comedic vibrancy.

Take the town church. The preacher speaks of Sodom & Gomorrah; an older women smirks and innocently blushes at the thought. Two intergalactic bounty hunters break in, smash the church, and a parishioner notes to the police they, “looked like they were from Los Angeles!” Critters understands the isolation and naivety of a midwestern American town. Their frame of reference doesn’t compute spaceship-piloting creatures, just those west coast ruffians.

There’s a spunk to Critters

There’s the town alcoholic. All of these movies need one, Critters paying pure homage to the ‘50s monster cycle as much as exploiting Gremlins’ popularity. That drunkard is Don Opper, playful and charming as he senses the impending invasion of eight furry beings. M. Emmet Walsh is grand as his opposite, town sheriff, utterly mystified as to why this sleepy town is suddenly under attack – and how his local drunk is somehow right.

At the center of Critters is a screen-generic American family, the tough father, sympathetic mother, the teen daughter in love, and the explosives-obsessed younger boy. Critters puts everything in place for the inevitable finale within minutes.

Yet, Critters manages to conquer that rudimentary form. It’s hilarious. Although the “Crites” expanded their mayhem in a better funded Critters 2, here they cuss and bite with a wickedly cruel style. Their creation is a delight: mobile ever growing furballs made primarily of teeth. That design is iconic and memorable, terrifying in low light, appropriately laughable in any other circumstance. They exist to eat. They’re built expressly for that purpose.

There’s a spunk to Critters. Even if the pacing is slow (even with an 80-minute runtime), the wit and middle-American observations elevate this appreciative knock-off. Gremlins was director Joe Dante’s tribute to the A-class of his movie-going youth. Critters then is the same, but nodding to the B-tier of exploitation monster cinema, but doing so with infinitely more enthusiasm than those quick cheapies. 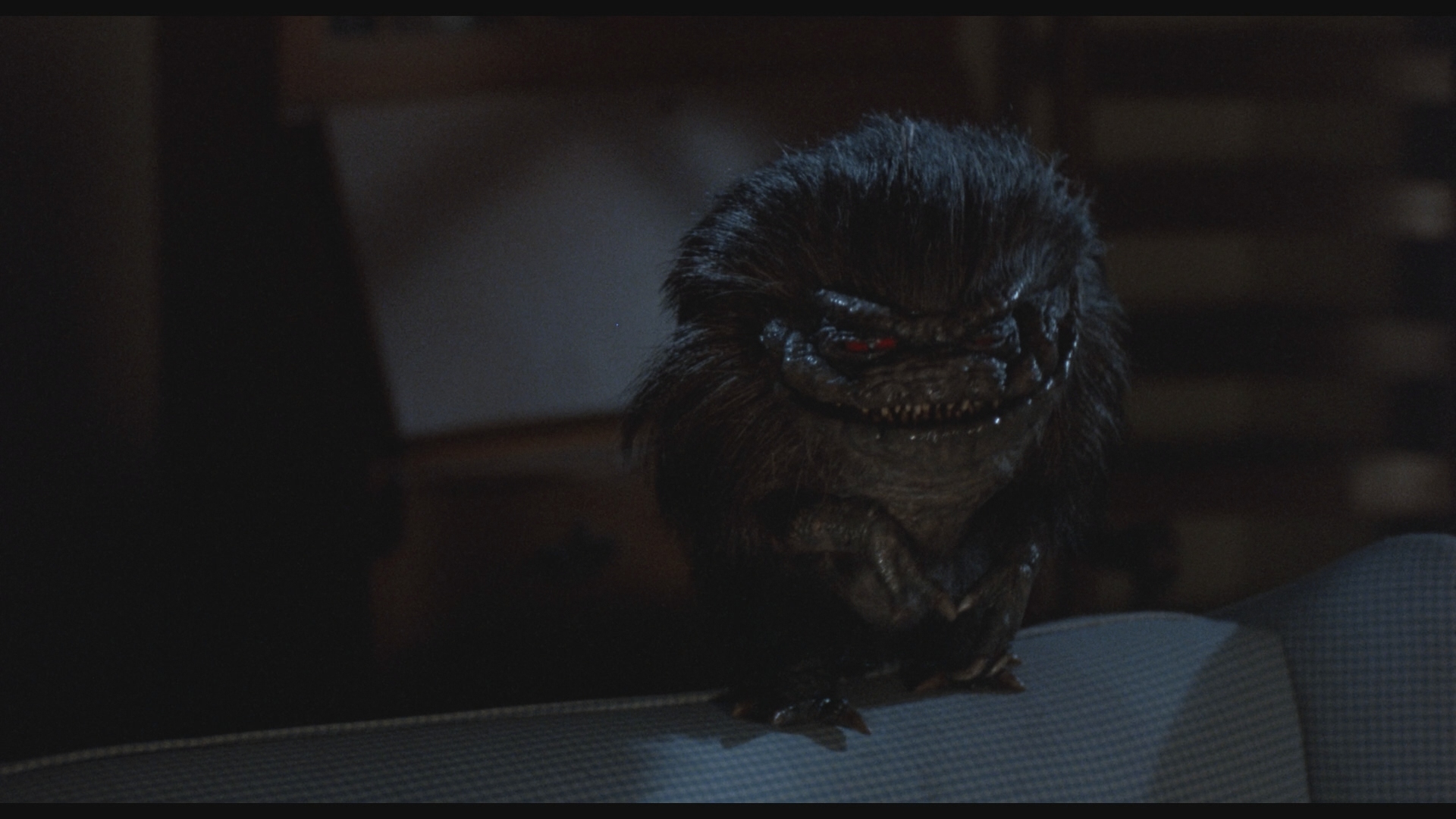 Blu-ray debuted in 2007. It’s 2018 and finally – FINALLY – Critters finds its way onto the format for the first time. With the backing of Scream/Shout Factory, Critters is given the lavish presentation it so deserves. Sourced from a new 2K scan according to press materials, this one looks gorgeous.

Once onto Earth after spending a few minutes on a foggy spaceship, Critters’ color explodes. Flesh tones skew toward an excessive orange, yet the warmth of a kitchen excels. Teal curtains and cupboards contrast beautifully. Saturation stays high until night falls and everything falls naturally toward blue.

Critters’ back-half necessitates rich black levels. While just a point off from true black, density and depth succeed. There remains enough brightness in the image to keep things stable and solid. Nothing is lost in the shadows or to murkiness.

Thanks also to the resolution. Excellent grain reproduction is notable. Consistency is surprising, especially with the litany of darkness. No errant noise slips into the shadows. Fidelity runs high, resolving facial detail in close along with the various Kansas landscapes. Crite puppets look great too, giving new life to the effects and their detail.

Other than a few specks of dirt, clean-up takes care of this print. Various matte work suffers little degradation.

DTS-HD comes in two flavors, one in 5.1, the other 2.0. Both have their qualities, but the 5.1 mix offers a natural spread. Stereo work tracks minor things like a phone hitting the receiver in right front. In the storm cellar, a Crite knocks over a bottle in the left rear, an effective bit of staging that ups the tension. Spaceships zoom about, and debris from the bounty hunter’s blasts takes off into positional channels.

In general, fidelity keeps Critters locked to its time period, although the hair band ballad “Power of the Night” never sounded better. Gunfire lacks force and LFE support is totally absent. Expect some heavy, worn treble at times. Around 45-minutes, dialog takes an audibly sour turn, but then recovers. Clarity and precision win out.

It took a while, but the wait is worth it. Critters overflows with rich bonuses. Like, two commentaries, one with the visual effects team of the Chiodo Brothers, the second with Barry and Don Opper, producer and star respectively. The real winner is They Bite, a documentary nearly as long as the movie itself. It’s fantastic, and one of Shout’s best productions. Writer Dominic Muir is given a tribute running 21-minutes, followed by some awesome raw footage from the production. An alternate ending, trailers, and a stills gallery rounds out this stellar package.

Although a knock-off of the better-budgeted Gremlins, Critters finds its identity in small town America with a wicked sens of humor.

The 15 unaltered images below represent the Blu-ray. For an additional 20 Critters screenshots, early access to all screens (plus the 18,000+ already in our library), 50+ exclusive 4K UHD reviews, and more, support us on Patreon.