Space: Where No One Hears Any Laughs

The “in space” sequel, or the end-of-the-creative-line for a horror series. Where other franchises reach a comedic crescendo on a spaceship (Jason Vorhees freezing, smashing a face in Jason X, Leprechaun turning gargantuan), it’s Critters 4 that strangely sees its humor evaporate. There’s not a laugh in this script.

It’s a movie populated by the dregs of society, from nightmarish capitalists who seek Crites for their planet conquering ability and the small crew of a salvage ship. One of the team is a raving drug addict, another is a captain obsessed with profit and leering sexual advances.

Critters 4 then wastes its heroes, staging them against blackened cinematography. Brad Dourif, forever an undervalued performer, leads this small cast of protagonists through a dreadfully tedious sci-fi excursion. He spends most of the movie sitting in a chair, whacking keyboard keys or yelling at an unseen AI. Poor Angela Bassett is stuck in a titillating shower scene, then spends the rest of Critters 4 yelling at people to move. Then, relative unknown Paul Whitthorne, underwritten as a kid who never saw Earth, moping around and disobeying orders.

Don Opper returns, for the first time out of place as the series’ anchor Charlie the bounty hunter. Often comic relief, he’s forced from his role because Critters 4 shows no interest in levity. The true stars spend much of Critters 4 as a mere pair. Their ability to cause damage and mayhem is minuscule – so they don’t.

Nearly every frame of this movie is unlikable. The best stuff comes from other movies, whether the five minutes of recycled footage from Critters 3 that opens Critters 4, or the stock materials from the forgotten 1983 sci-fi flick Android. At least there a heartbeat of passion still exists. Everything new crumbles by way of desperate action and dismal pacing.

Credit to Critters 4 in trying for distinctiveness, but it’s an inescapable bore. Somehow, this is the longest movie of the series, because of course it is, winding through same-looking corridor sets repetitively, and braying at on-ship computers. Critters 4 wastes away into a pile of goo equivalent in value to the sludge left behind by a smashed Crite. It’s purposeless. Roger Ebert once listed Critters 2 among his most hated movies. If only he kept going and endured the drudgery of Critters 4. 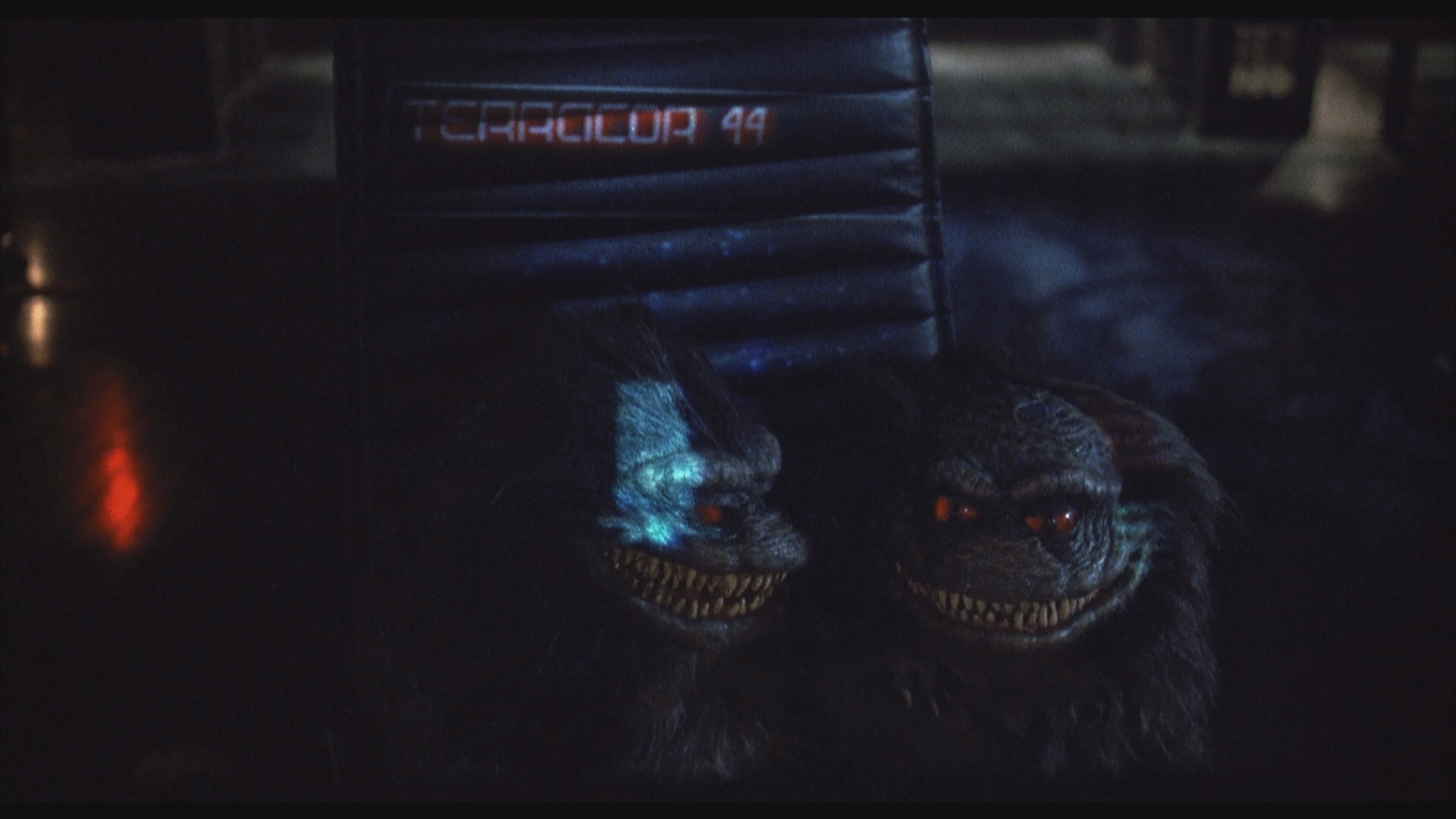 Scream/Shout Factory debuts this dud on Blu-ray in a passable transfer. By no means the highest resolution or the most modern, the scan pulls enough detail to earn a pass. Close-ups do exhibit definition. Trap doors used late in Critters 4 clearly exhibit the texture of painted wood (in conjunction with a metal scraping sound; oops).

Rough grain replication enters some problematic patches. Although black levels exhibit pure black many times (especially when out in space), when not at that level, noise seeps into those shadows. It’s distracting. Encoding generally holds things together though, with one aside after Opper and Whitthorne enter the experiment room. Blue walls there give the compression fits.

Director Rupert Harvey steps into the booth for a commentary track. That’s followed by another great making-of, this one titled Space Madness, running 22-minutes and charting the path of this sequel. Trailers and stills complete the disc.

Barely tolerable, Critters 4 is a slog through space that has no redeeming qualities as a sequel or as a franchise finale.

The 15 unaltered images below represent the Blu-ray. For an additional seven Critters 4 screenshots, early access to all screens (plus the 18,000+ already in our library), 50+ exclusive 4K UHD reviews, and more, support us on Patreon.