Sin In The Suburbs (1964) was originally made under the Motion Picture Production Code, which strictly regulated film content and forbade adult content of any kind. Starring Audrey Campbell as Geraldine, she plays a bored, insatiable housewife always looking for her next sexual liaison. Think June Cleaver stepping out with secret lovers behind Ward Cleaver’s back.

The soap opera plot revolves around Geraldine’s wayward daughter Kathy, an innocent teen girl who soon falls prey to Yvette (adult performer Dyanne Thorne). Yvette lives with her shady brother, helping acquire women for their secret sex clubs. Geraldine is excited at the prospect of joining Yvette’s secret club, unaware of the woman’s growing influence over her daughter. In the world of this movie every housewife is bored with family life, seeking out sexual thrills from any man they come across. That includes yard workers, delivery men, and even high school boys.

Sarno’s film is suggestive but avoids nudity. Don’t expect much more than women prancing around in lingerie. The subject matter is controversial but the staging is tame by today’s permissive mores. For early erotica intended mostly for arthouse theaters, Sin In The Suburbs shows sophistication and a real understanding of filmmaking. The best way to describe it is Eyes Wide Shut by way of Hitchcock. It tackles several lurid themes for its day, including overt lesbianism and shades of incest.

Ten years later, Sarno would circle back to some of the same themes in a much more direct fashion. Confessions Of A Young American Housewife indulges in far more nudity and on-screen sex than the earlier effort, though not that far removed from the realms of adult content broadcast on venues like Cinemax and HBO today. That is a definite reflection of how much times had changed in America in less than ten years since Sin In The Suburbs. Its content verges on the border of pornography without getting completely explicit. The commercially successful film’s cast consists of experienced adult performers. They take to the more normal filming demands of the movie with enthusiasm.

Confessions is about two couples experimenting with swinging and group sex as a lifestyle. The two women, close friends, swap husbands without a second thought in bed. Everything is going well for the tight-knit group when one of their mothers shows up. Jennifer (Jennifer Welles) is an uptight widow and slowly gets sucked into her daughter’s wanton lifestyle. The question becomes if Jennifer can handle the ramifications of her new libertine attitude and the fall out for her daughter.

Most primitive sexploitation films are little more than an excuse to show the adult action. Things like plotting and acting are usually afterthoughts. Director Joe Sarno avoids that pitfall with tight direction and well-constructed scripts. Sin In The Suburbs is certainly lurid and prurient, but it’s also compelling for how it builds each character up into an unavoidable and tragic dramatic fate. Some of that same magic returns for Sarno in Confessions Of A Young American Housewife. The latter movie does indulge almost every bad adult movie trope mocked over the years, from the randy mother-in-law to the clueless delivery boy. However, it’s a sexy film layered with actual drama. 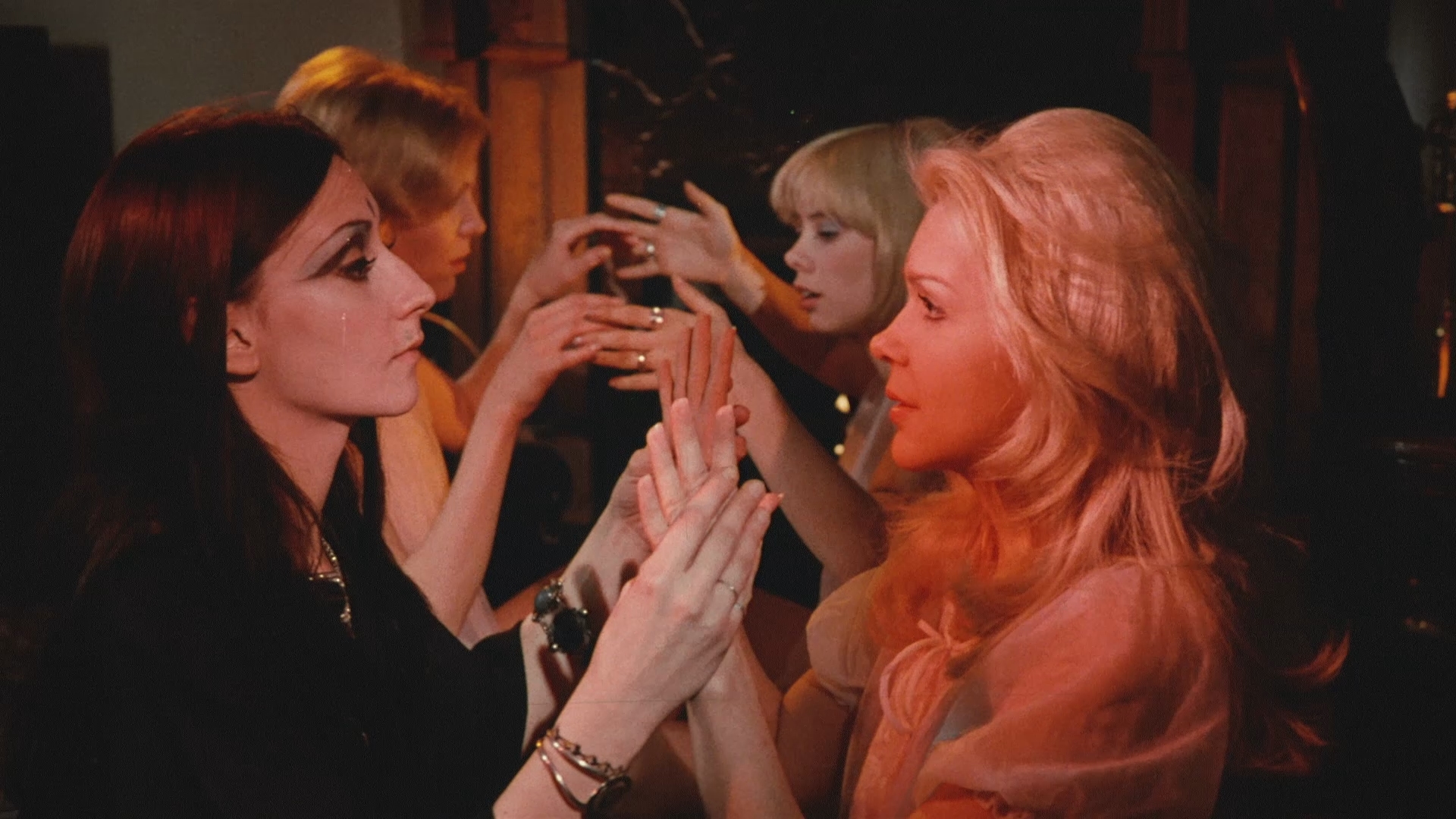 Recently discovering new elements for each of the three included films, Film Movement Classics does a superb job bringing Sarno’s films to Blu-ray. Restored in 2K resolution and making every effort to find the best extant elements, the film-like presentations possess steady contrast and crisp definition.

All three films are included on a single BD-50, which the strong AVC encodes deliver consistent 1080P video for without artifacts. All three are presented at 1.78:1 aspect ratios very close to their theatrical presentations and from new 2K transfers.

The black-and-white Sin In The Suburbs (1964) has stable black levels and surprisingly excellent cinematography. It runs nearly 91 minutes in its uncut form. The cult film possesses fine texture and fairly sharp video in this fantastic film transfer. The film elements have minor issues, including a hint of telecine wobble and a bit of damage to the first reel. A running gate scratch shows up for a scene or two. No one used to watching older cult films should worry. The damage is largely negligible and unobtrusive. There is no comparison in detail and clarity to older versions. What we have here is a quantum leap forward in resolution.

The second black-and-white feature, Warm Nights and Hot Pleasures (1964), looks rougher and comes from more erratic elements than Sin In The Suburbs. Running 69 minutes, a 35mm film print was only discovered recently for this “lost” Sarno film. The contrast is more blown out, though still serviceable. Its softer definition is more usual for underground movies from this era.

The color Confessions Of A Young American Housewife (1974) occasionally pops with definition and clarity, but otherwise has average picture quality. This is the 73-minute theatrical cut, missing a few of the steamier scenes found on the movie’s original VHS version. While the cinematography may be a step behind Hollywood pictures from the era, Sarno’s film looks better than a lot of the sleazy grindhouse filmmaking of the early 1970s.

It’s a strong film transfer that draws out natural flesh-tones without revisionist color timing. A mild push towards magenta indicates fading film stock. Aside from a touch of ringing in a few scenes, the grain structure holds up nicely. The elements are in decent condition. Black levels and contrast are both serviceable for this period on Blu-ray.

These are dialogue-driven films when the action isn’t getting hot and heavy. A few unnecessary pops and ticks show up over the hiss, but generally these soundtracks get the job done.

Film Movement Classics has done a wonderful job on this rare triple feature of vintage erotica and sexploitation films by filmmaker Joe Sarno. The single-disc set comes in FM’s usual clear case with a well-produced booklet.

The 14-page booklet offers a new essay by Video Watchdog’s Tim Lucas breaking down the three films and their history. It’s an attractive package that goes in line with the three prior volumes in the Joseph W. Sarno Retrospect Series.

Sin In The Suburbs Special Features:

Audio Commentary by Tim Lucas – Video Watchdog’s Tim Lucas is no stranger to commentaries, having now appeared in eighty-some different commentaries over the years. He’s done commentaries for Arrow Video and others. As always, he comes in prepared and discusses the movie in this informed solo commentary. His delivery may be a little dry for this kind of salacious fare but he’s always reliable.

Warm Nights and Hot Pleasures (1964) – Thought to be lost for many years, a print of Joe Sarno’s direct follow-up to Sin In The Suburbs was just discovered in 2017. The black-and-white sexploitation film isn’t on par with the other two included films on this volume, though it’s an interesting relic. It was the correct decision to make this movie a bonus, it’s not good enough to carry its own release.

Audio Commentary by Tim Lucas – Another thorough, informed commentary by the genre and exploitation historian. His solo commentary covers a wide swath of topics, from the actresses to the obscenity case this movie provoked.

Mini-Audio Commentary by Joe Sarno – The sexploitation auteur discusses making the film and its impact in this short solo discussion that last approximately 15 minutes.

Deleted Scenes (10:23 in SD) – Likely sourced from VHS given its erratic picture quality, several scenes are presented from the movie with far more explicit and raunchy footage. This material veers into hardcore territory at its edges. The deleted scenes were included with a prior 83-minute VHS cut.

Confessions of a Young American Housewife

Joe Sarno’s career highlights include these two daring films for their time, delivering real characters behind the luridaction and plotting.

The 15 unaltered images below have been taken directly from the actual Blu-ray. For an additional 42 screenshots taken from Sin In The Suburbs and Confessions of a Young American Housewife, early access to all screens (plus the 18,000+ already in our library) in full resolution, dozens of exclusive 4K UHD reviews and other perks, support us on Patreon.