John Woo’s entry into the post-Saving Private Ryan WWII Hollywood deluge is, at best, a disingenuous take on the Pacific front. There’s Nicolas Cage screaming and hollering, waving a machine gun while the camera pans over a nest of Japanese soldiers flopping around. Cage’s character is named Joe; generic, but a stand-in for G.I. Joe or Marine Man Joe or any other litany of common wartime propaganda idols.

Although a tale of Navajo sent into service for their coded language, Windtalkers focuses on Joe. He’s that heroic soldier: Alcoholic to hide his past, but able and willing to mow down enemies blindly – with ludicrous accuracy. At times, the Rambo sequels were less preposterous. Woo’s penchant for theatrical explosions and gratuitous slow motion don’t help.

Disappointing though is the potential in pairing Woo with a western war film. Instead of a distinct, persevering perspective, Woo’s action deluge is overly enthusiastic and pro-war. Nowhere is this more apparent than during a nighttime camp sequence. A soldier hoisting a flamethrower considers his job, “I have a giant Zippo on my back, roasting human beings.” The camera stops, lingers for a second, before panning to Noah Emmerich who blurts out with a beaming smile, “I’m proud to be here!” Can’t let reality impede on the fantasy of warfare.

… all Windtalkers seems capable of is tired action scenes

Windtalkers uses extreme gore of course. Woo’s exaggerations continue here, spilling squibs overloaded with fake blood. The overselling of violence happens primarily to American Marines; Japanese go down at a distance, or shoot from bunkers as a heavy explosion forces them out. Little Japanese blood is shown, except in close combat. Windtalkers is cautious in how war impacts one side, and even then, sends the Navajo it purports to represent into the background.

Adam Beach stars alongside Cage as Ben Yahzee, Navajo native and recipient of Noah Emmerich’s racial bias. That comes to a head in a single scene, messily handled and forced. Rather than confront issues with authenticity, again Windtalkers puts up a shield. Emmerich’s tirade spews epitaphs, leading to a brawl, and eventually reconciliation. The thesis? Combat cures racists. It’s a bizarre circumstance.

It’s all of this opportunity given to Windtalkers that frustrates. The chance for Woo to helm a mega-budget western WWII epic. The opportunity to elevate code talkers to a deserved status in the public eye. A shot to expose inherent racial bias among American troops. And yet, all Windtalkers seems capable of is tired action scenes, disjointed from the core narrative, obsessed with an enraged Nicolas Cage in a hammy performance. 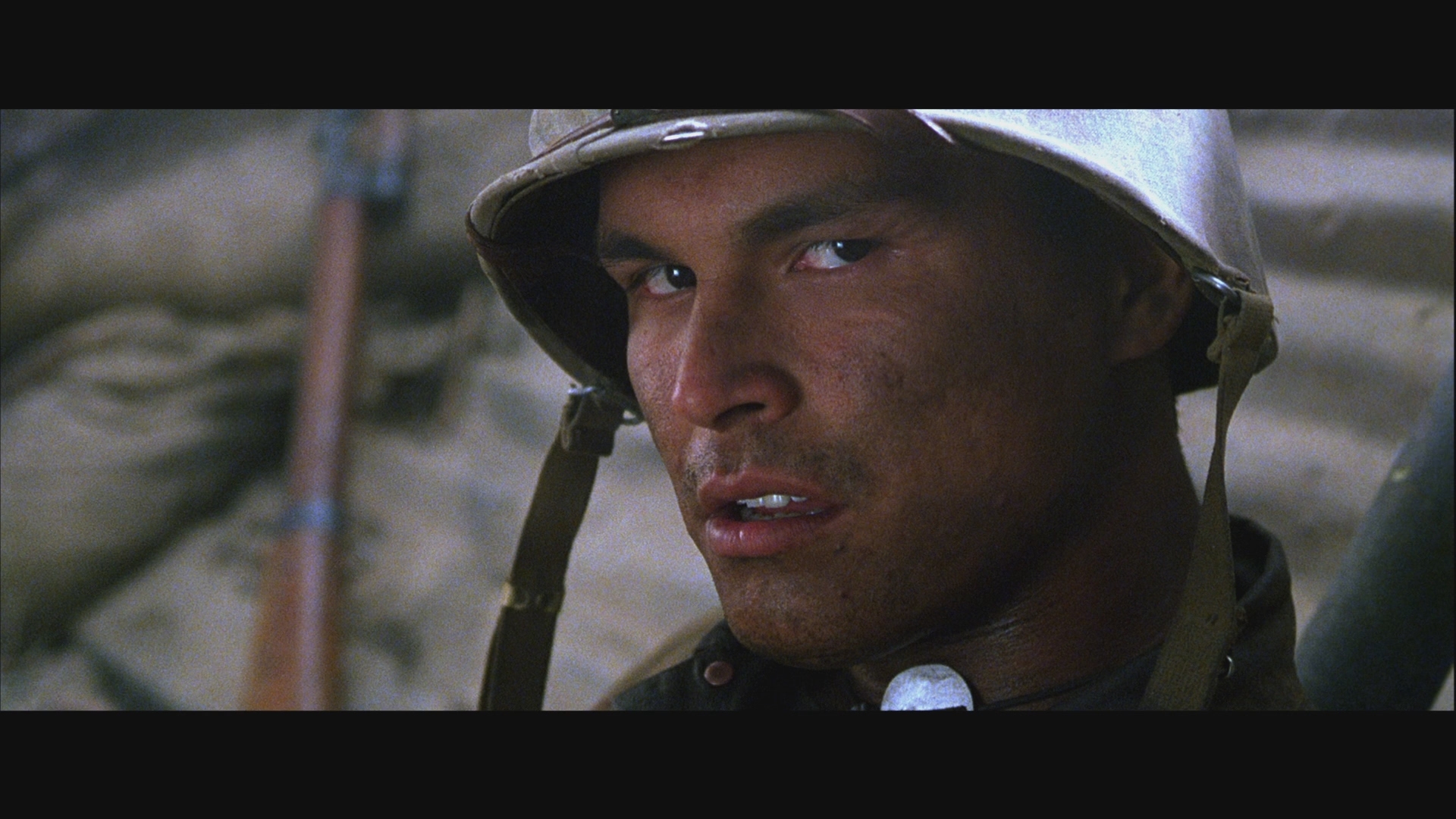 MVD re-issues Windtalkers on Blu-ray after MGM sent out a barebones disc a while back. This presentation offers a clean look at the source from what looks like a slightly dated master. That’s assumed because of lower resolution evident when the camera pulls back. Those long shots of the island lack the tightness of better masters.

Still though, detail is quite often sublime. Close-ups capture the sweat, dirt, and blood covering soldier faces. Scenes of thick foliage surrounding troops resolve tall grass and trees well. Kudos to the encode for managing a thin layer of grain too. There’s no loss to compression.

Slightly washed out to give Windtalkers an aged look, the rush of sepia doesn’t devour color. Greens still stick out. Explosions swell with hearty amounts of orange. Flesh tones warm up without going overboard.

Mirroring the DTS-HD mix of old, the missing link is low-end support. The slew of mortar fire that dominates Woo’s action fail to hit with much force. Range falters, failing to support the visual scale. Every blast happens without room shaking impact.

Everything else works. The level of direction and precision in this track raises Windtalkers’ sonic credibility. Planes make their bombing runs with exceptional tracking front-to-back. Bullets sweep through the soundstage, soldiers shout in each positional, and still a hint of wildlife ambiance slips in to complete things. With mild bass, explosions rely on spreading debris. They do so well.

On DVD, MGM issued Windtalkers in a three-disc set. That content never made it over to Blu-ray until this MVD Marquee Collection release. This two-disc Blu-ray pulls everything over, one disc holding the theatrical cut, the other an unbearably long director’s cut.

On the latter, three commentaries are included. One features John Woo and producer Terence Chang. Actors Christian Slater and Nicolas Cage come next, with actual codetalker Albert Smith pairing with actor Roger Willie on the third. Four “fly-on-the-wall” featurettes peek behind-the-scenes with great footage of the action scenes as they were shot. A look at the actor’s boot camp training and a photo gallery complete this disc.

Paired with the theatrical cut is a 23-minute feature titled Code Talkers, allowing the real Navajo men to tell their stories. American Heroes then spends nine minutes honoring their contribution. A look at the soundtrack composition runs five minutes. It’s a strong slate of bonuses.

The 15 unaltered images below represent the Blu-ray. For an additional 22 Windtalkers screenshots, early access to all screens (plus the 18,000+ already in our library), 50+ exclusive 4K UHD reviews, and more, support us on Patreon.