The Cartoon Network Hit Shows Up On The Big Screen

Juvenile silliness and visual gags galore fill this fun animated comedy starring the Teen Titans. Made with younger viewers in mind, but also filled with dozens of superhero references aimed at adults, the animated Teen Titans make their transition from cable to the big screen an unqualified success. Teen Titans Go! To the Movies features all the familiar voice actors for the Teen Titans from their two different incarnations, alongside stars Kristen Bell and Will Arnett voicing new characters.

DC Entertainment and Cartoon Network’s first animated Teen Titans show starred Greg Cipes as Beast Boy, Scott Menville as Robin, Khary Payton (The Walking Dead) as Cyborg, Tara Strong (My Little Pony) as Raven, and Hynden Walch as Starfire, starting all the way back in 2003. That initial series ran five well-received seasons and was sorely missed when it ended. It was brought back as Teen Titans Go! in 2013, employing more cartoony animation and a new format intended strictly for comedy. Teen Titans Go! became a runaway hit on Cartoon Network and currently remains on the air.

All the voice actors from the television series reprise their roles for Teen Titans Go! To the Movies. Will Arnett (The LEGO Batman Movie) and Kristen Bell (Frozen) lend their voices as the evil Slade and Hollywood director Jade Wilson. They even get huge Superman fan Nicolas Cage to voice Superman in a cameo role. Take that, Tim Burton.

The Titans encounter the villainous Slade, otherwise known as Deathstroke. WB completely avoids using his super-villain codename in the PG-rated movie. Slade has a diabolical plan for world domination and becomes Robin’s arch-nemesis. A filmmaker from Hollywood, Jade Wilson, finally offers Robin and the Teen Titans their chance at making a superhero movie.

Teen Titans Go! To The Movies is a completely funny movie that parodies superheroes and spoofs the entire genre

The animated film has several silly and enjoyable musical numbers along the way by the Teen Titans. Everything from rap to techno fills out the musical numbers. The hyperactive direction and visually impressive animation are made for young viewers.  Some of the gags and superhero jokes are likely to fly over their heads, meant for older viewers familiar with Marvel and DC’s films. Speaking as one of those said adults, the non-stop humor and inside superhero references make it a satisfyingly fun watch even for jaded fans.

If there are problems, they are slight. The script heavily revolves around Robin. For whatever reason, Raven and Starfire are pushed to the background despite both of them being popular characters. Outside of the singing numbers, Raven has few lines. I’m guessing the producers primarily aimed this movie at young boys as the intended audience. The occasional fart and poop jokes give that away.

Having seen most of the original Teen Titans cartoon back in the day, I drifted away from watching Teen Titans Go! like many fans of the original series. Redesigned for maximum humor aimed squarely at children and the removal of serialized storytelling, the new show was a disappointment despite its flashy animation redesign.

My expectations for this new theatrical movie were low, but instead I came away very impressed with its humor and playful sense of superheroes. Teen Titans Go! To the Movies is a completely funny movie that parodies superheroes and spoofs the entire genre. From a surprise Stan Lee cameo, to the appearances by a whole slate of DC superheroes like Batman and Superman, it’s a constant delight. This animated comedy intended for younger viewers is a laugh riot that delivers a great deal of energy and fun. 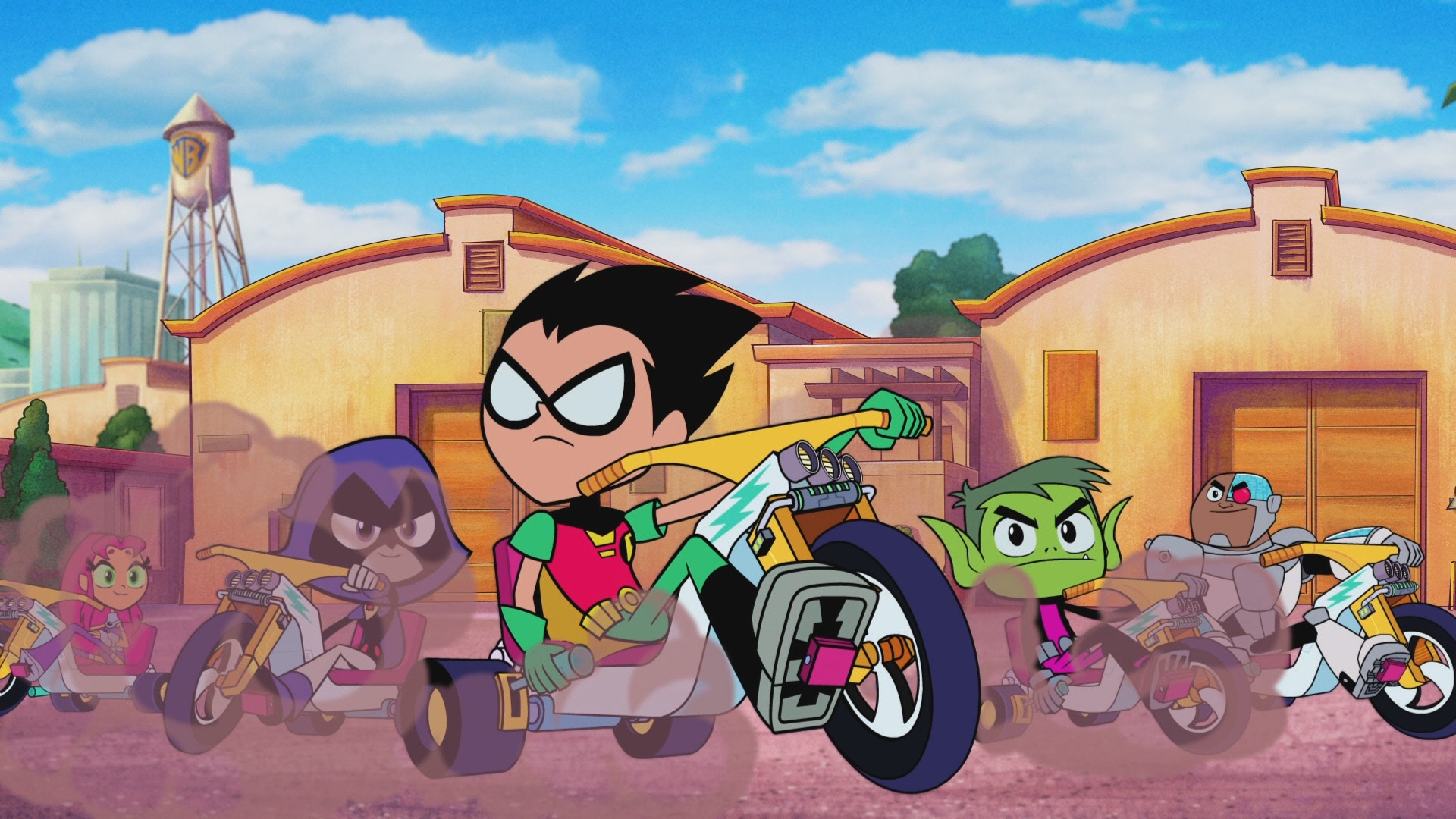 This vibrant Blu-ray release from WB Animation and distributed by Warner easily qualifies as eye candy with its bright, candy-coated palette. Making the transition from the small screen to the big screen, perfect black levels and contrast help the vivid animation leap off the screen.

If you have caught Teen Titans Go! on Cartoon Network, expect much tighter and polished animation. The cartoony animation designs may put some adults off but this is demo video quality. There are even a few well-crafted scenes that break the expected animation style and pay homage to other forms.

Teen Titans Go! To the Movies has brilliantly-colored standard animation made for an HDR pass and probably should have seen UHD. You can even purchase it in 4K from various streaming services. Let’s hope that Warner reconsiders and eventually issues the movie on UHD.

The Blu-ray’s main feature runs 84 minutes on a BD-50. Presented at the movie’s 1.78:1 theatrical aspect ratio, the 1080P video sizzles with eye-popping clarity. Encoded in stout AVC averaging nearly 30 Mbps, Warner avoids the banding issues of their direct-to-video animated fare. This is a first-rate AVC encode which cleanly handles the brightly saturated colors in sparkling fidelity.

Teen Titans Go! To the Movies has strong, lively audio that will give your home theater a serious workout. The engaging 5.1 DTS-HD MA sonic presentation has amazing depth and presence. This is a high-fidelity soundtrack that ramps up the low end and contains massively discrete separation across the entire soundstage. Expect big, expansive sound from the active audio design. Mastered for real dynamic range, the audio will test your speakers.

Moving to the big screen has amplified the show’s music from dinky to spectacular. The varied music by Jared Faber offers everything from rap-tinged songs, to retro pop from the Eighties. The tunes are catchy for younger viewers and heard in pristine quality. While the movie isn’t a musical per se, music drives the narrative.

WB includes a high-gloss slipcover with first pressings of this Blu-ray and DVD combo set. A digital copy is also included, one that gives both UltraViolet and Movies Anywhere digital rights when redeemed through VUDU. The code redeems in HDX quality.

As a bonus, a code for a free Teen Titans Go! digital comic book on dccomics.com is inside. A flyer for the movie’s soundtrack advertises its existence on Spotify.

This is a fun set of special features largely aimed at children, designed for maximum comedy and interactivity. Most of these featurettes are available on VUDU.

Sing-a-long With Silkie – Three short sing-a-longs for children using the movie’s songs with karaoke lyrics on the screen.

Teen Titans GO! To the Movies: WB Lot Shenanigans (03:56 in HD) – One of the more amusing bonuses included this year on a Blu-ray. This live-action short has actors dressed up in mascot costume versions of the Titans, getting chased around the Warner lot by a security guard. It’s silly fun.

Teen Titans GO!: Translated (02:18 in HD) – Watch the same scenes play it out in several different dubs, from German to Japanese.

Everything is Fake (00:51 in HD) – An exclusive song not in the movie that never made it past this rough animatic demo.

Teen Titans Go! To the Movies

The hit animated Cartoon Network show successfully makes the jump to cinemas in Teen Titans Go! To the Movies, as everything is bigger and funnier in scope.

The 15 unaltered images below have been taken directly from the actual Blu-ray. For an additional 19 screenshots taken from Teen Titans Go! To the Movies, early access to all screens (plus the 18,000+ already in our library) in full resolution, dozens of exclusive 4K UHD reviews and other perks, support us on Patreon.