As Princess Bride begins, Fred Savage is home sick from school, playing the videogame “Hardball.” Soon, his grandfather enters the room with a book in hand. Savage groans at the thought of reading instead of playing. Soon, he’s captivated. It’s easy to understand why.

There’s hardly a better introduction to the potency of books than Princess Bride. It’s a movie adaptation about true love, but one that leaves Savage sorry it’s all over. The kid put down a videogame for a story about princesses. The power of books depicted on film, at least those as well-considered as Princess Bride.

The story lasts because of a peculiar universality. Most fairy tales share that quality; Princess Bride overrides the tropes though. Only some remain. There’s the damsel princess and the man who will save her. Another man is out for revenge against the one who killed his father. Cue a friendly giant, a castle, idyllic forests, dungeons, and fanciful action too.

All of this is handled with a touch of caution. Princess Bride’s slick, conditioned dialog makes foes into friends. Hero Westley (Carey Elwes) and Inigo Montoya (Mandy Pantinkin) sit and chat before their duel. Montoya even helps Westley up a mountainside. They trade sarcastic, enjoyable barbs in total acceptance of their cliched circumstances. Some in Princess Bride know the type of story they’re entangled in. Others, like the snide prince, don’t.

In the 2000s, Shrek received credit for dunking on fantasy stories; Princess Bride did so long before, and better. Rob Reiner’s film adaption of William Goldman’s book gets it, totally, and completely, with enough morbidity to poke at the darkness lingering in a, say, Hansel & Gretel and enough softened charm as to never lose the heart.

There’s a positive moral – true love always wins. Princess Bride doesn’t whiff on the overarching goodness of these timeless stories. Still, it does bend them. Montoya gets his revenge and there’s no positive moral there. He’s satisfied. His life’s purpose is fulfilled, and off he rides into the sunset. That’s part of Princess Bride’s surreal truth. Not everything ends cleanly.

Endless quotability helps Princess Bride further, from simple one-off lines to smarmy gags (“Please choose me over suicide”). Entertainment value is sublime. Say, “Inconceivable!” and the association with Princess Bride is instantaneous. The film lingers in pop culture, more than the book (which takes a bit out of the thesis). Books take us places. That place in Princess Bride comes from a state of storytelling bliss. 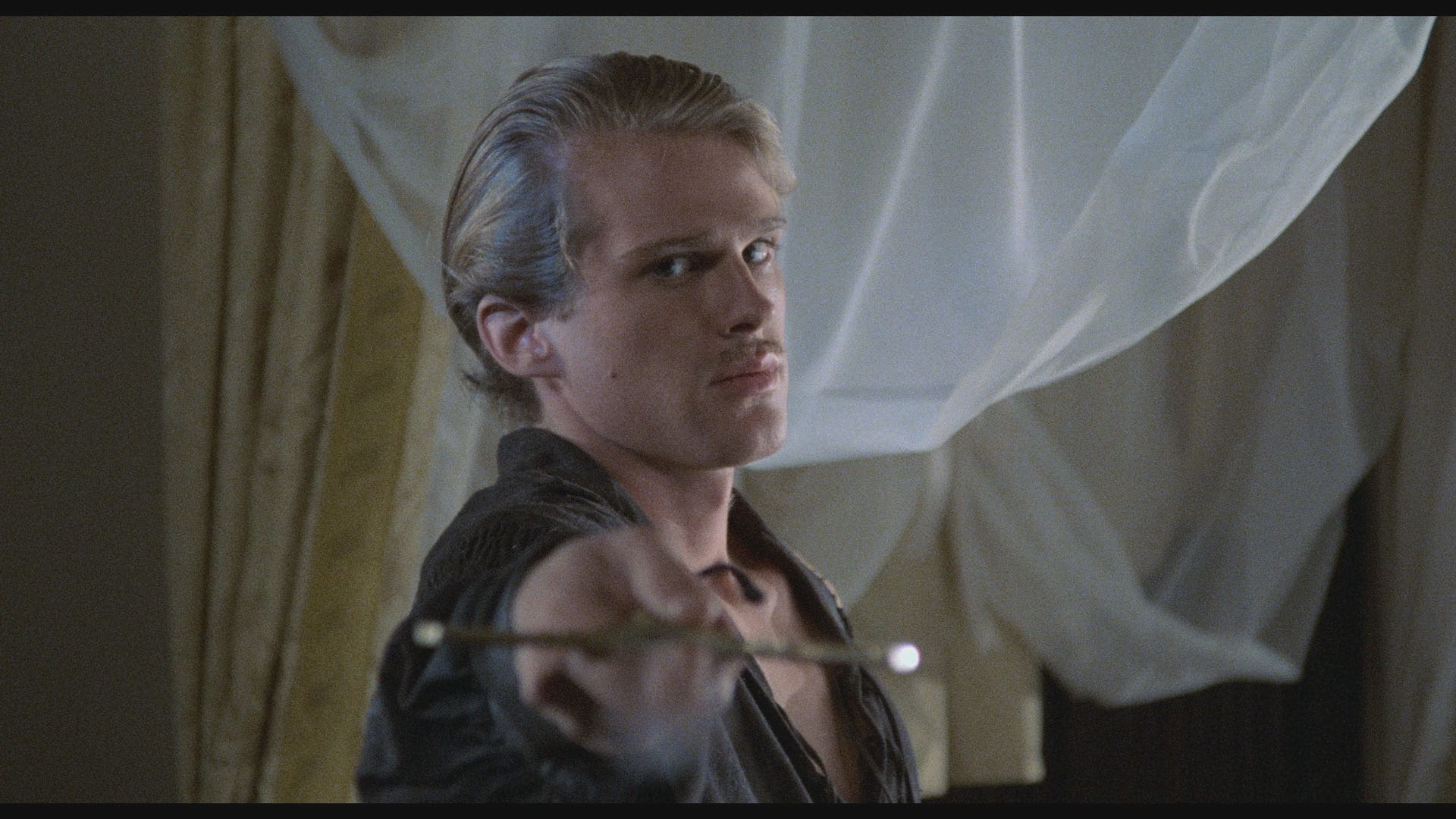 Dazzling. Criterion’s treatment of this 1987 fantasy is a testament to perfectionism. It’s immediately noticeable. Resolution is cranked to a sublime high, extracting sensational levels of texture. Facial detail jumps from the frame, consistent and pure. Exteriors give new life to the surrounding forests.

Additional high grades go to grain management. Although Princess Bride sees its share of spikes, grain never overruns the textural details in the image. Fine grain is exhibited for much of the runtime, gorgeous and filmic thanks to this compression job.

Overall brightness runs high with equally dense black levels. The Fire Swamp set mixes both into a depth-laden scene. When sun backlights the sets, intensity runs high. Princess Bride can only look better when it jumps to a next-gen format.

DTS-HD serves this pure audio, presented in 5.1 if primarily a stereo track. The only LFE comes from spouting flames in the swamp. Directional use barely registers.

What does work though is fidelity, keeping dialog rich with little age. Princess Bride’s small score uses extensive treble, with no audible degradation. Like the video, purity is key to Criterion’s presentation.

Criterion finds a small bounty of bonus features to include. Some of them date back to the 10th anniversary in 1997, including a commentary that brings together director Rob Reiner, writer William Goldman, producer Andrew Scheinman, and actor Billy Crystal. They make up a fine speaking team. Another alternative track is a collection of excerpts from the audiobook, seeing how things aligned from page to screen.

Six older making-of sections include some on-set footage shot by Elwes and other gems. Swordfighting choreography gets its due in The Art of Fencing, a seven minute clip. Finally, a look at fairy tales and how Princess Bride subverts them comes in last (aside from trailers).

Soft, sweet, and a bit demented, The Princess Bride makes a case for books by making a better movie than the original novel. It’s an odd case.

The 15 unaltered images below represent the Blu-ray. For an additional 27 Princess Bride screenshots, early access to all screens (plus the 18,000+ already in our library), 50+ exclusive 4K UHD reviews, and more, support us on Patreon.