The Dude is everything an American isn’t supposed to be. He’s a hard drinker – of White Russians, of course. His employment status is unclear, if he ever had one. The Dude is a chain smoker of pot and spends seemingly every weeknight in leisure, bowling with his friends.

Big Lebowski is set in the early ‘90s. That’s post-Reagan’s anti-drug rhetoric and a hardline Republican stance against social reforms. It’s clear The Dude (Jeff Bridges) doesn’t care. He shrugs off a speech by Bush I signaling the beginning of the Iraq war, playing in the background of a gas station. Again, everything an American wasn’t supposed to be, amid a conservative crackdown.

That’s the Big Lebowski’s relatable fantasy in a movie flush with eccentric characters, from nude painters, and unhinged veterans. Out of all of them, the sensible one is a long-haired, sunglass-wearing ‘70s hippie completely out of time. And through it all, The Dude just wants his rug back. He’s not unreasonable.

Bridges crafts an entire character in mere minutes, floating on his own cloud, made in his own head. He makes a call to an uber-rich businessman with the same surname, looking for $20 or so to replace a rug, when he’s caught in a crime scheme involving an easy million. Big Lebowski’s smarts kick in early, this California beach bum unwittingly outsmarting the upper class.

Lebowski’s super power is total indifference to a society judging him. Reagan yelled at him to get a job; that continues as Lebowski enters the mansion of the highly educated “Big” Lebowski. Bridges is accused of wanting handouts, failing to take responsibility, and mocked for his chronic joblessness. It’s a conservative campaign speech. So, Bridges commandeers a different rug. That’s safe humor in a country that mocks (even despises) its richest.

Not so safe is casting John Goodman as the fiery Walter Sobchak, a character satirizing Vietman war veterans who spin their combat stories into every conversation, and pull a gun for any menial argument. That’s gutsy humor in a country with such admiration for its troops, and Goodman is all in. Were Bridges’ Lebowski not so genuine and pure, Sobchak’s short fused vet is easily Big Lebowski’s highlight. Certainly, Shoback misses the starring spot by inches.

In a story flush with surreal happenings and bizarre poetic pace, Big Lebowski represents a different sort of American dream. There’s hardly another citizen in the country as cool, collected, and outright happy as The Dude. He smokes, he gets laid, and doesn’t worry about his next paycheck. It’s everyone else that’s the problem, from the rich trying to keep their trophy wives and the war vet who bought into promises of victory, unable to come to terms with the war’s reality. They create stress. The Dude just is.

Big Lebowski takes it all to task, and with a dazzlingly drawn centerpiece, played with perfection by Bridges. The film persevered as an icon because it mocks the traditional norms of what it means to be happy, and its unrelenting goofiness that gives Big Lebowski a vibe unlike few other (if any) studio films. 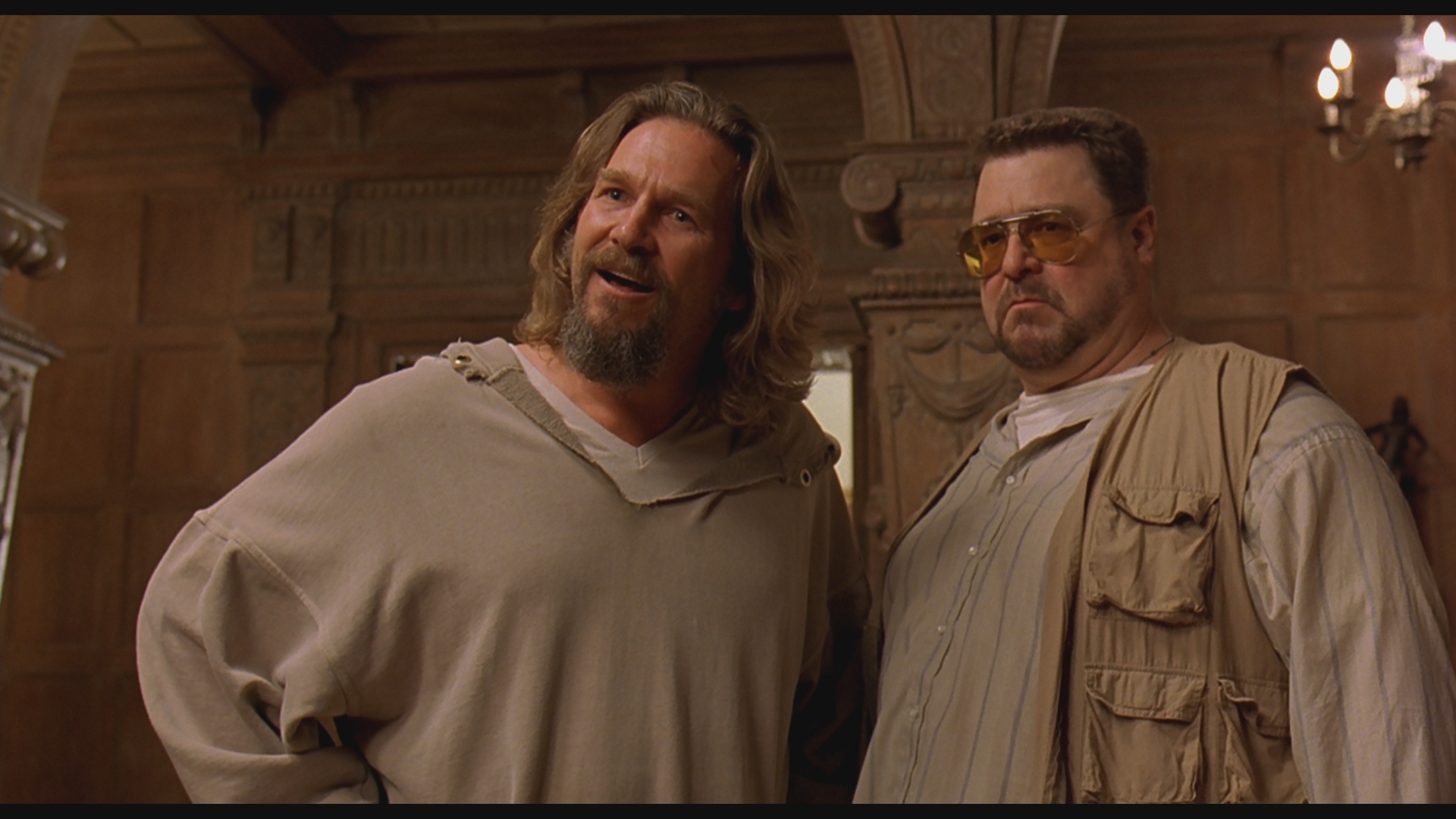 After a rather disastrous Blu-ray presentation (the same one packed in with this UHD), Universal makes amends for Big Lebowski’s 20th anniversary. Press materials do not state whether this transfer comes from a true 4K scan. Going by eye alone, this looks more akin to 2K upscaled, particularly when compared with say, Sony’s 4K output. However, given the poor Big Lebowski transfers of old, it’s difficult to say whether this is accurate to a softer source or low resolution material.

That aside, the UHD debuts with a comfortable warmth. Color remains consistently pure, untouched by aggressive digital grading, with great flesh tones and primaries. The final shots with a red Folgers can against a blue sky look absolutely remarkable. That’s true of the bowling alley too, from the varied uniforms inside to the neon lights hanging on the exterior.

Grain replication is pure, keeping the images filmic without falling into noise. That keeps detail high, with excellent overall texture. Facial detail sticks out, and all those shots of dirty bowling pins bring out the age of the lanes. The Dude’s iconic sweater produces beautiful fidelity, with each stitch precisely defined.

This jump to UHD doesn’t do much for contrast. Big Lebowski’s depth is marginal with a soft hand on HDR settings. Contrast remains held back, the high point being those neons on the bowling alley. The rest settles in adequately. Black levels fluctuate. The opening pan shot of tumbleweeds looks artificial, with floating shadows lacking in density. That’s corrected in almost all cases later, but does return. Speaking in general terms, shadows do fare better than contrast with strong, dense presence.

Remastered into DTS:X for this release, the mix follows the methods of The Dude himself: reserved and passive. Most of the activity happens inside the alley, with balls rolling down the lanes, passing between channels. Those sounds pop up in the rears on occasions too.

Everything here is about dialog, rendered without fault in the center channel. Twenty years on, Big Lebowski absolutely sounds modern in terms of clarity. Not much challenges the dynamics, but the smooth soundtrack exhibits pleasing bass lines.

In terms of bonuses, everything here is included on the Blu-ray. The UHD itself hosts nothing. Given this is the 20th anniversary, having 10th anniversary extras says a lot about the lack of care. The first option in that lengthy bonus menu is a trivia pop-up game titled Worthy Adversaries. Two Big Lebowski buffs can challenge this quote-fest as the movie takes a backseat. An Exclusive Introduction has a phony film preservationist presenting the film with the Coen’s sense of humor. The Dude’s Life is a 10-minute look on why The Dude became an icon, explaining the appeal.

The Dude Abides defines the film with a retrospective, cast and crew interviewed. A DVD relic making-of is no less informative if you’ve never caught it. The Lebowski Fest is a documentary clip focusing on a convention for fanatics of the movie. Flying Carpets and Bowling Pin Dreams details the idea and the creation methods of the dream sequences.

An interactive map takes viewers to the shooting locations, providing a then-and-now look at where these images were captured. A Jeff Bridges photo book looks inside all of the photos the actor took while on set. A separate photo gallery just offers the images, no interviews and chatter. Three U-Control features include The Music, scene comparison with various commentary and video snippets, and Mark it Dude which counts up the profanities and other offensive material.

Jeff Bridges creates an iconic character in The Big Lebowski, a casual, supposedly anti-American loafer who wins at enjoying life.

The 15 unaltered images below represent the Blu-ray. For an additional 18 Big Lebowski screenshots, early access to all screens (plus the 17,000+ already in our library), 50+ exclusive 4K UHD reviews, and more, support us on Patreon.