The Spy Who Dumped Me is not that movie, the formulaic rom com where, just before the finale, the woman discovers her absentee boyfriend is an international secret agent. That does happen here – Mila Kunis is shocked when, after breaking up with her boyfriend of one year, he turns out to be a CIA operative. But that’s in the first 15-minutes. Time to move on.

And yes, The Spy Who Dumped Me moves. It does so with an essential action/comedy energy, rarely settling down, and if it does, Kunis and co-star Kate McKinnon turn into examples of screen chemistry magic. Also, the two quip and crack like authentic friends, giggling at poop gags as much as they stand together when in danger.

Those two form the center of The Spy Who Dumped Me, wherein two average women become entangled in a spy ring dominated by men. They hold their own, a clever twist on formula where it’s not only masculine special ops training and hyper-intelligence that conquers evil. The entire film is a testament to female friendship and how powerful that bond can be; Kunis and McKinnon form the perfect pairing for that overarching theme.

… a subversive, feminine satire against the Bourne and Bond machismo

Never does the script feel preachy or forced. If anything, The Spy Who Dumped Me glides so naturally on otherwise cliche-addled spy material, it’s a wonder why no one wrote this before. Men primarily lead the action. They hold the guns, throw the punches, and leap into danger. The slow erosion of that manliness is the success wherein Kunis and McKinnon begin to take over. In the final shot, the two stand against Yakuza, guns drawn, confident, and using their bond as an advantage.

Although littered with traditional action movie set-ups – a car chase through an outdoor cafe, an apartment scuffle – the quality supersedes any expectation. Choreography and intensity, plus the abrasive comedy, bring everything home. As time passes, The Spy Who Dumped Me adds in color. By the finale, that’s going too far (an acrobatic act is ludicrous, even in this context), but by then, the charm is complete; Kunis and McKinnon win.

Credit is also due in terms of structure as the script by writer/director Susanna Fogel and co-writer David Iserson ditch the usual formalities. Their concept avoids a third-act set-up wherein the star pair break up. They never once distrust or fight with one another. McKinnon’s slightly screwy Morgan enjoys the European tour, guns and all. Kunis’ Audrey goes along, able to break tension with a joke. As much as The Spy Who Dumped Me plays in the spy genre, it’s also dissolving the seriousness, drifting into a subversive, feminine satire against the Bourne and Bond machismo. It’s a blast. 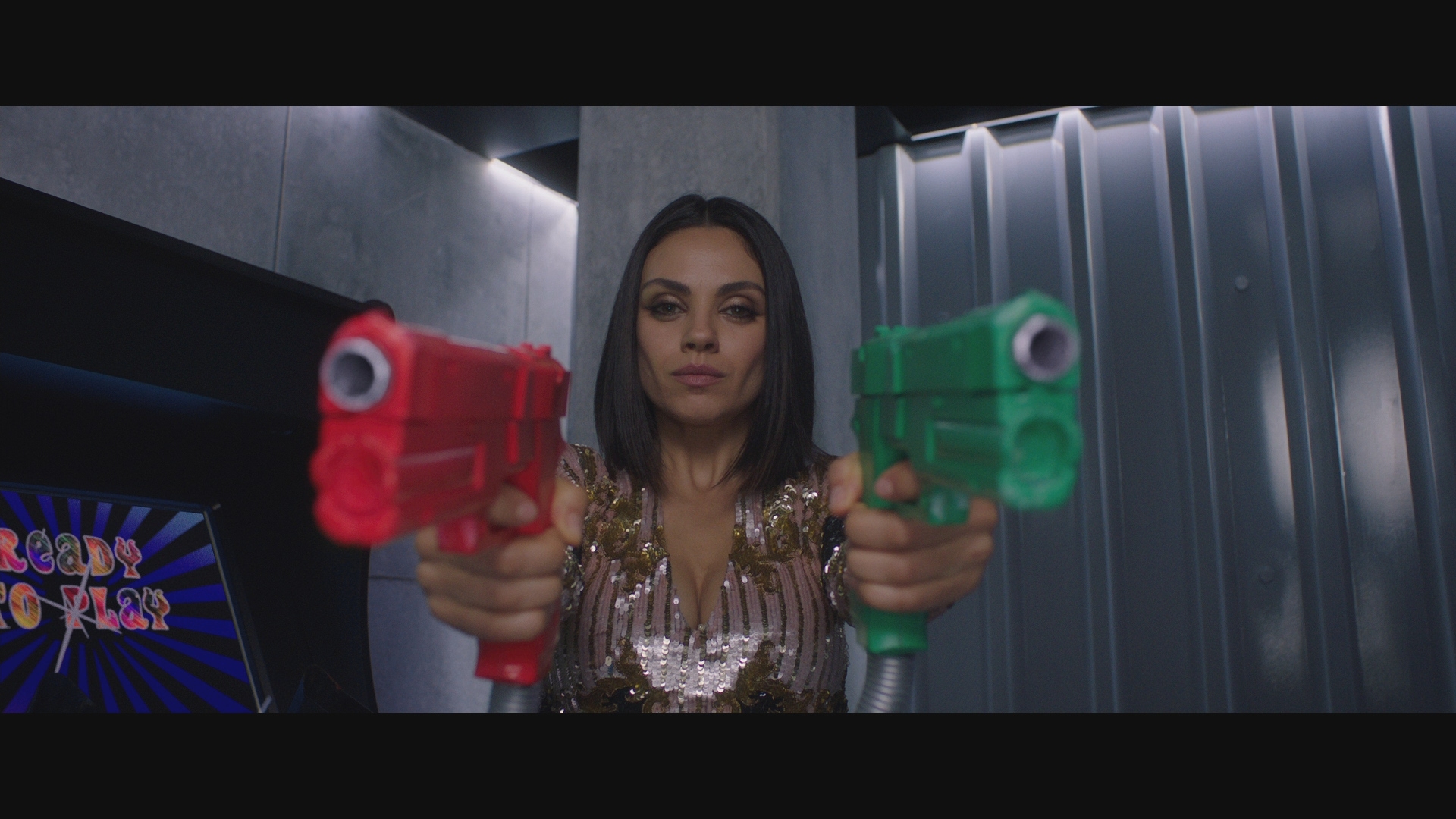 Given a Dolby Vision pass, this 2K digital source carries a grain filter to give the images grit. It works, all resolved cleanly by Lionsgate’s encode. Were it not for the bonus features showing digital cameras on set, the film-like appearance is wholly convincing.

The disappointment here comes with the bland HDR pass. Contrast isn’t punchy, lacking weight and power. Black levels do well. There’s an early scene inside of a van with all-black leather interior. Density there is outstanding, with excellent gradients and shadow detail. While great, that’s not “dynamic.” The Spy Who Dumped Me looks more SDR.

Plus, detail runs high. Although not peak sharpness for UHD (again, a 2K source), facial definition soars. Precision clarity holds when showcasing the various landmarks too. The older architecture and the detail that comes with it gives this transfer energy.

Flush with color, The Spy Who Dumped Me’s vibrancy makes this a dazzling disc. High saturation keeps up the visual energy, helped by a stellar Lionsgate encode. The grain filter layered over each shot exhibits no notable blocking or noise.

Typically bright, high contrast and tight black levels merge into a depth-filled presentation. This, in tandem with ridiculously clean detail, give The Spy Who Dumped Me exquisite dimension. Even for a new release, this is great Blu-ray material, easy on the eyes and consistent.

Although primarily a comedy, the action quotient is quite heavy. In the opening scenes, gunfire spreads out, using the full width afforded by Dolby Atmos. In equal terms, subwoofer support thumps along, accentuating each shot. An explosion introduces the title card, a prime example of what’s coming with a flawless debris field paired with a suitable thump.

Packed with both range and precision, The Spy Who Dumped Me excels when in chaos. An early car and motorcycle chase sends vehicles through the soundstage. As they pick off tables and debris, the rush of stuff drifting toward the rears is a delight. Trying to reach reference tier (and only just missing), the scene involves a slew of gunfire too, equally rich in directionality.

Quieter moments work too. Bar scenes envelop the soundstage. Dialog splits the stereos properly. It’s active, and bumping up against some mega-action flicks.

Opening with the 11-minute Covert Operations, a routine behind-the-scenes featurette, the bonuses move into a funny promo with actor Hasan Minhaj. He walks through the set chatting with co-stars. A separate look at action choreography fills in a gap from Covert Operations.

The best stuff comes next. A gag reel is full of great goofs, and ten minutes of deleted scenes feature a bunch of trimmed humor. Off Script completes the disc, letting improv take over on set. While it’s a shame the audio is pulled live (at times difficult to make out), the material is hilarious.

The Spy Who Dumped Me

Mila Kunis and Kate McKinnon sell The Spy Who Dumped Me’s feminist satire of the spy genre, and keeps the laugh quota high while doing so.

The 15 unaltered images below represent the Blu-ray. For an additional 16 Spy Who Dumped Me screenshots, early access to all screens (plus the 17,000+ already in our library), 50+ exclusive 4K UHD reviews, and more, support us on Patreon.