The “revolution” of the title is choice. Free will, the thing that separates humans from programs. Set up in the first Matrix when Neo chose between two colored pills, Matrix Revolutions is thus the cap on the series thesis. It’s everywhere. There’s a choice to believe, a choice to act, a choice to fight; everything revolves around this central thesis.

While firm, it’s also bloated and convoluted. Matrix Revolutions relies on a literally named Deus Ex Machina in its conclusion, a choice so phony as to crumble the entirety of this trilogy. This comes after a litany of sci-fi action cliches, from improbable piloting to the mechanized machine guns fending off an attack of red-eyed robots. Spectacle, sure, but at a thematic cost.

Of greater concern is the arc of Neo (Keanu Reeves), now interpreted as a literal Christ figure. From turning into a beam of light and a cross, Neo’s invincibility and preaching takes The Matrix to an embarrassing extreme. Matrix Revolutions is a story of men saving men, the climax between two men certain of their success.

Matrix Revolutions is the weakest of this series, a confounding mish-mash of ideas with few connecting points

Matrix Revolutions is the weakest of this series, a confounding mish-mash of ideas with few connecting points. While the ideas of humanity, those feelings that make us what we are, sit in the middle, each is discarded because Matrix Revolutions seeks an all-out finish. The bullets, the guns, the lasers, the robots; how loud and torrential this all is, primarily without purpose.

At this stage of the story, the sangfroid Neo is unchanging. His romance to Trinity (Carrie-Anne Moss) is sold. And Morpheus (Laurence Fishburne) won’t give up his belief in Neo’s Christ-figure, Morpheus himself an apostle. There’s little room for characters to grow or expand. Each arc is essentially finished, leaving Matrix Revolutions with only blustery visual effects to sell this final chapter. Turns out, Hollywood dollars do not a successful story make.

It’s a shame, leaving The Matrix at a place of ridicule, drooping toward the movie-goers vitriol of the Star Wars prequels. Yet, the theme of technology turning humanity into programmed drones is forward-thinking. Matrix, despite the fall off in quality, does suggest an element of contemporary society.

Jacking into the Matrix now is equivalent to unlocking a smart phone or tablet; people get taken elsewhere, live two separate lives between online and off, and interact on two different spheres. We choose to do that. Strangely, it seems like a programmed action, the more control social media enacts on us. In time, maybe The Matrix and its sequels will pan out as visionary, quality aside. 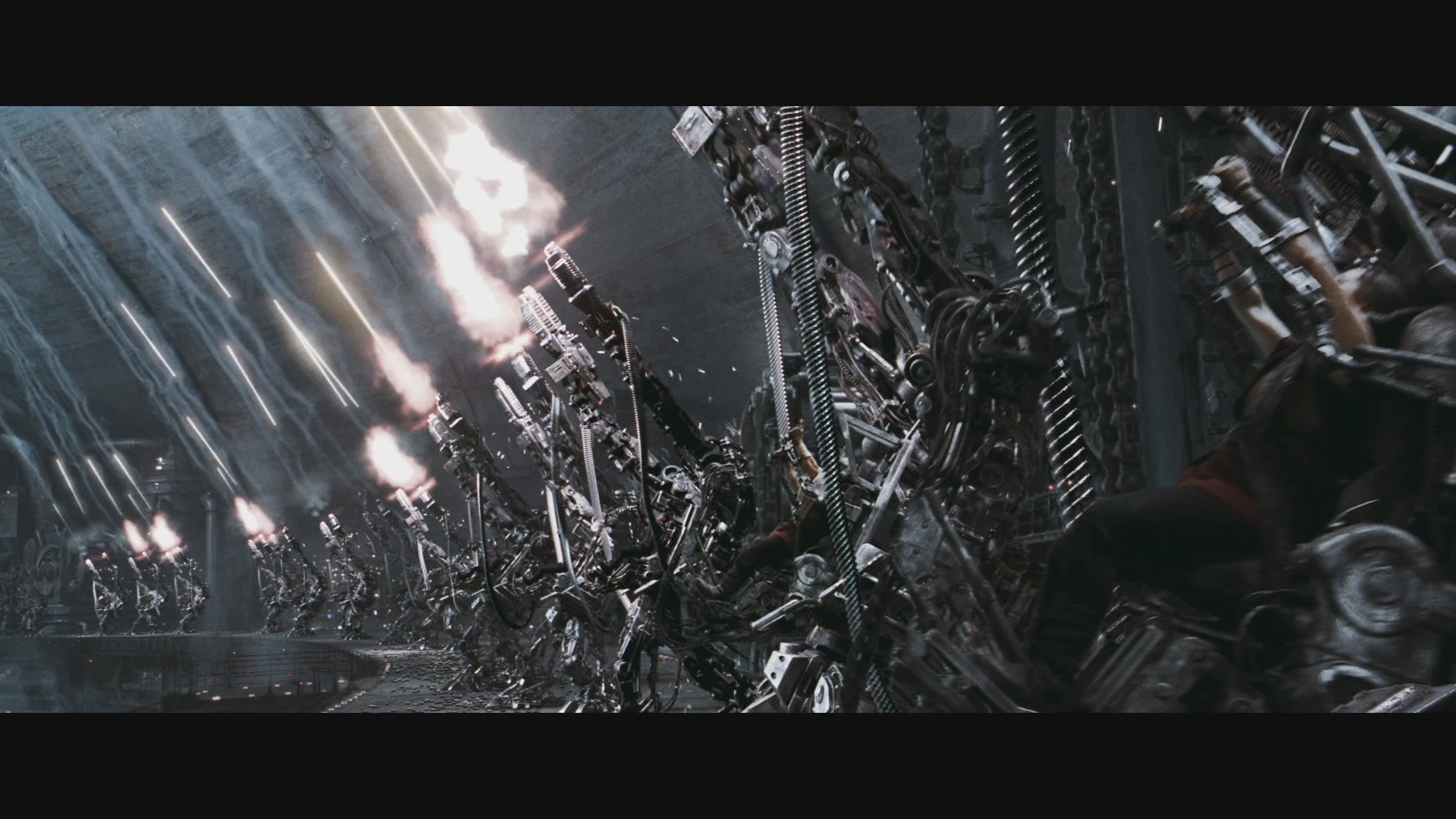 From a 4K master sourced from the original negative, the makeover of Matrix Revolutions is quite beautiful. Gifted with tremendous resolution, the level of fidelity visible in this transfer is special. Facial definition reaches reference tier and stays there. Impeccable sharpness shows off the full capability of 4K.

While the digital effects of the early millennium do not reach the same resolution, they do not suffer from the aliasing noted in Matrix Reloaded. Softer than the rest, those massive CG battles look a touch ragged now. At 1080p on Blu-ray, this doesn’t matter. Blown up to 4K, it’s a different situation.

Dolby Vision accounts for a lot though. All of the heated ammunition glows gorgeously. Electric EMP blasts lift the contrast. Sensational black levels enjoy adding density to the busy aesthetic of Zion city. All of the piping and wiring demands extensive shadows. Nothing is lost in these details. Contrast likes to turn aggressive, bleaching out skin tones to exaggerate light. That’s a bit much.

Pinpoint grain resolves purely. The only issue of note is in scenes with The Oracle. For whatever reason, close-ups on her smear excessively. This is the only time where the encode appears to fail Matrix Revolutions.

In revisiting this sequel, the famously bright green color grading is taken down a few steps. Of the trilogy, Matrix Revolutions displays the best color, often rich in orange and a few moments of rainbow-like skylines. Flesh tones exhibit purity even when against the overall teal-ish hue.

A sensational audio mix, from the opening crawl of code to the one-on-one burly brawl at the finish. Matrix Revolutions packs in the action, with hordes of Sentinels rampaging in Zion, and defenses spewing ammo by the thousands. The precision of this mix earns a reference stamp, able to mingle the variety of effects together with nothing lost and ample effort going into a sonic warzone.

All of the ships traveling through open space, the lightning and the rain; all of that continues for the duration. Scenes of dialog decorate themselves with ambiance, especially in hangars or the subway purgatory.

When needed (which is often) the subwoofer puts up an ample fight. The power exhibited by this mix puts Matrix Revolutions in the top five percent of UHDs to date in this category. Wait for the mountains of explosions, the falling drill robots, the ship crash into Zion, or the voice of Deus Ex Machina. Depth and power earn this disc a best of 2018 ribbon.

Continuing the trend, the UHD contains two commentaries. One comes from philosophers, the other from unfriendly critics. Over on an extra Blu-ray, all of the DVD material carries over, sadly stretched from 4:3 to 1:78:1. It’s ugly, but the seven sections looking behind-the-scenes cover the entirety of the production.

The weakest of the Matrix movies, The Matrix Revolutions offers plenty to look at, but stumbles when trying to explain the philosophical margins.

The 15 unaltered images below represent the Blu-ray. For an additional 35 Matrix Revolutions screenshots, early access to all screens (plus the 17,000+ already in our library), 50+ exclusive 4K UHD reviews, and more, support us on Patreon.

The following six screen shots serve as samples for our Patreon-exclusive set of 49 full 4K screen shots grabbed directly from the UHD: