Hail to the Geek

The Matrix subverted a dull existence suggesting an ordinary, generic office worker is indeed something more. It was a middle American fantasy, rebellious, loud, gun-laced, and ornery with spiced philosophy. Answering the remaining questions is where things all fell apart.

Matrix Reloaded is the essential geek fantasy. It’s relentless in pursuit of making that once routine office worker, Neo (Keanu Reeves), into a hyper-god man, chased by women wearing leather and brawling with 80+ villains who cannot win. It’s about last-ditch escapes from exploding buildings and freeway accidents of ludicrous scale, all while building to an absolute example of pandering Hindu philosophy that makes Neo the center of this entire universe, with the ability to remake it all.

While Neo is the willing hero, he’s also The Matrix’s grandest error. He turns The Matrix from a tech-noir, gun-fetish fantasy into a male-dominated sexual power fantasy. Neo beds Trinity (Carrie Anne Moss) to the beat of a techno rave. He’s approached by Monica Bellucci, demanding that he kiss her; Neo does, twice.

Matrix Reloaded wants this as the center for a reason. By the end, through a verbose and challenging speech from the Matrix’s creator, The Architect, Neo must display a choice of free will. It’s demanded of him. Neo does so because of hope, love, and choice, things denied to most programs. By this climax, Neo becomes a being of code, using his superpowers to thrash a city while in flight, then literally penetrating his lover’s heart to save her life. It’s beyond gaudy and overwritten.

Although often creative and expensive, Matrix Revolution’s action comes off as clutter, disruptive to the greater story. While Laurence Fishburne and Carrie Anne Moss tumble with twin specters in a glamorous, pure Hollywood freeway chase, it’s a wonder what else is happening in this world. The sequence goes on for almost 15 straight minutes. All of this smash-and-bash exhibits a turn-of-the-millennium cool (and turn-of-the-millennium digital effects) without any genuine story beats.

Neo is given his moments of course. The Wachowskis again pay homage to martial arts cinema. Reeves rumbles with Collin Chou in a delighting bit of choreographed kung-fu. Whatever credit that generates is undone by the named “Burly Brawl” that sees a slew of Hugo Weaving clones amassing in a courtyard to collapse on Reeves. It’s back to geeky cool again, uplifting the male-dominated subculture and losing distinctiveness. It’s unlikely anything creatively pops given the baseline is the culturally-shattering The Matrix. A literal interpretation of “geeks will inherit the earth” collapsed it all. 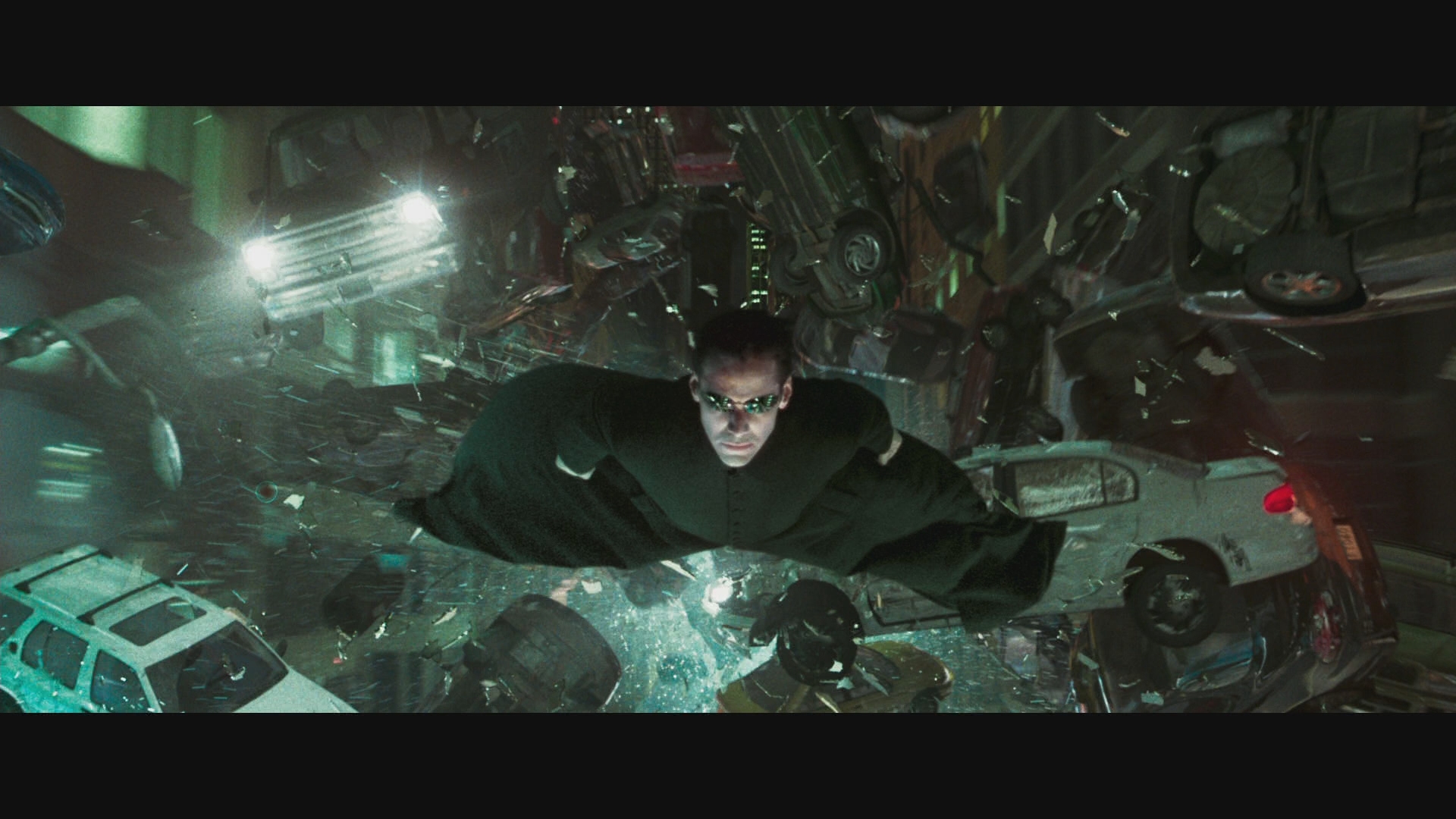 Warner’s treatment of this first Matrix sequel comes from a new 4K master, sourced from the original negative, so says publicity material. Questioning their marketing line is difficult. Matrix Reloaded features a sensational, prickly grain structure, so fine and pure as to look wholly authentic to a Super 35 source.

Behind that is gobs of fidelity. Facial definition becomes the standard bearer. Textural qualities maintain their density and purity consistently. Watch as Counselor Hamann gives his speech to the Zion crowd; the texture on his robe is absurdly perfect. The same goes for the various sweaters and other rundown garb worn by the Zion populace.

For this new master in Dolby Vision, the green tint is toned down if not eliminated. Matrix Revolutions carries a teal-drifting palette, occasionally lifting flesh tones to an aggressive degree. The foyer fight gives characters a chalky appearance. Otherwise, there’s a definite orange slant to skin, if not abnormal in this future existence.

Trend-setting contrast and black levels help sell all of this. The interior of the ships with their deep pockets of shadow lose nothing. Carrie Anne Moss’ black leather holds clarity even when against dense backgrounds. Slightly hot contrast is utilized for effect in spots. Otherwise, highlights stand out, a strong HDR pass with plenty of energy.

While this all sounds great, do note the dated digital effects do sour this fun. As the Nebuchadnezzar pulls into Zion’s port, visible aliasing is evident on the lower resolution effects. Likewise, any green screen shots with digital backgrounds sink in terms of sharpness. Matrix Reloaded uses a lot of those.

Remastered with Dolby Atmos (and defaulting to Dolby Digital… eww), the new soundmix is a tremendous showcase of this new tech. Code swirls around the soundfield before a single frame of live action is displayed. Once there, Moss slams her motorcycle into a guard’s station, the resulting explosion a jolt of power in the low-end.

Bullets split the stereos and rears with stunning discipline. Moss dives from a window firing bullets in slow-mo, each round tracing front to back in perfect timing. Come the Burly Brawl, bodies become strewn. Tracking is faultless, with the dynamic range bold enough to emphasize each kick. That freeway chase remains a home theater staple, dazzling in its ability to move vehicles between speakers at will, with plenty of force when they come crashing down.

Matrix Reloaded succeeds elsewhere too, filling a Chinese market with ambiance, Zion’s port with activity, and voices in The Architect’s room swirl in a 360 degree sweep.

On the UHD, two commentaries reside. One is driven by philosophers, the other by critics who disliked the series. It’s an eclectic choice. Everything else resides on a separate Blu-ray bonus disc, the same as before. That includes a six-part making of, with each of those parts splintering off into additional material. While from the early days of DVD, the footage is worth churning through, assuming you have not seen it before. A half-hour making of the videogame spin-off Enter the Matrix is offered, this followed by the cinematics from said game. There’s a music video remaining.

The mystique of The Matrix is undone by The Matrix Reloaded, a male fantasy that gives the geek otherworldly powers to save us all.

The 15 unaltered images below represent the Blu-ray. For an additional 31 Matrix Reloaded screenshots, early access to all screens (plus the 17,000+ already in our library), 50+ exclusive 4K UHD reviews, and more, support us on Patreon.