Prehysteria isn’t more than a clunky, even forced knock-off of the ‘80s family comedy. Think E.T. or Harry and the Hendersons, replacing alien and bigfoot kind with miniaturized, extinct reptiles. Yet, even with dopey early ‘90s dialog and rampant, cliche-addled script, Prehysteria wins with lasting charm. It’s 2018; Prehysteria still works for that intended audience.

Through rudimentary puppetry and an occasional splash of stop motion, the five animals take on plausible life, a few visible wires aside. That’s key. Prehysteria needs those critters. Brett Cullen isn’t given much to work with as a single dad running a grape farm. His two kids, one a stereotypical teenage girl (Samantha Mills) the other an Elvis-obsessed 12 year-old boy (Austin O’Brien), barely form characters. They exist to broadly represent the targeted audience.

There’s little drama. O’Brien asks Cullen about their deceased mother and Mills acts out in the presence of another woman. The performances fail to capture any nuance. Prehysteria needs a villain too. That’s Stephen Lee who discovers the dinosaurs, only to lose them in a mix-up. He’s bumbling and exaggerated, again what Prehysteria needs, overselling dialog to make-up for the lack of any genuine action.

Strangely, the lack of presence and subdued plotting ends up giving Prehysteria a calming effect. A small, soothing score mixed with dinosaurs playfully acting up works as a whole. Setting this on a non-descript, middle American farm creates a sense of isolation, shrinking things down to a digestible level. With an appropriate level of fantasy where no one ever really gets hurt and the threats feel minuscule, Prehysteria is allowed to stretch into playfulness.

Of course Prehysteria has scenes where the kids try to hide their dino pets. And of course it has scenes where the extinct lizards wreck the kitchen in the hunt for food. It’s every kid-hides-the-monster feature congealed into a comfortable whole. Band’s creativity as a producer is in securing this project, and foreseeing a hot market. What he made is unavoidably tempting, charming, and lasting. 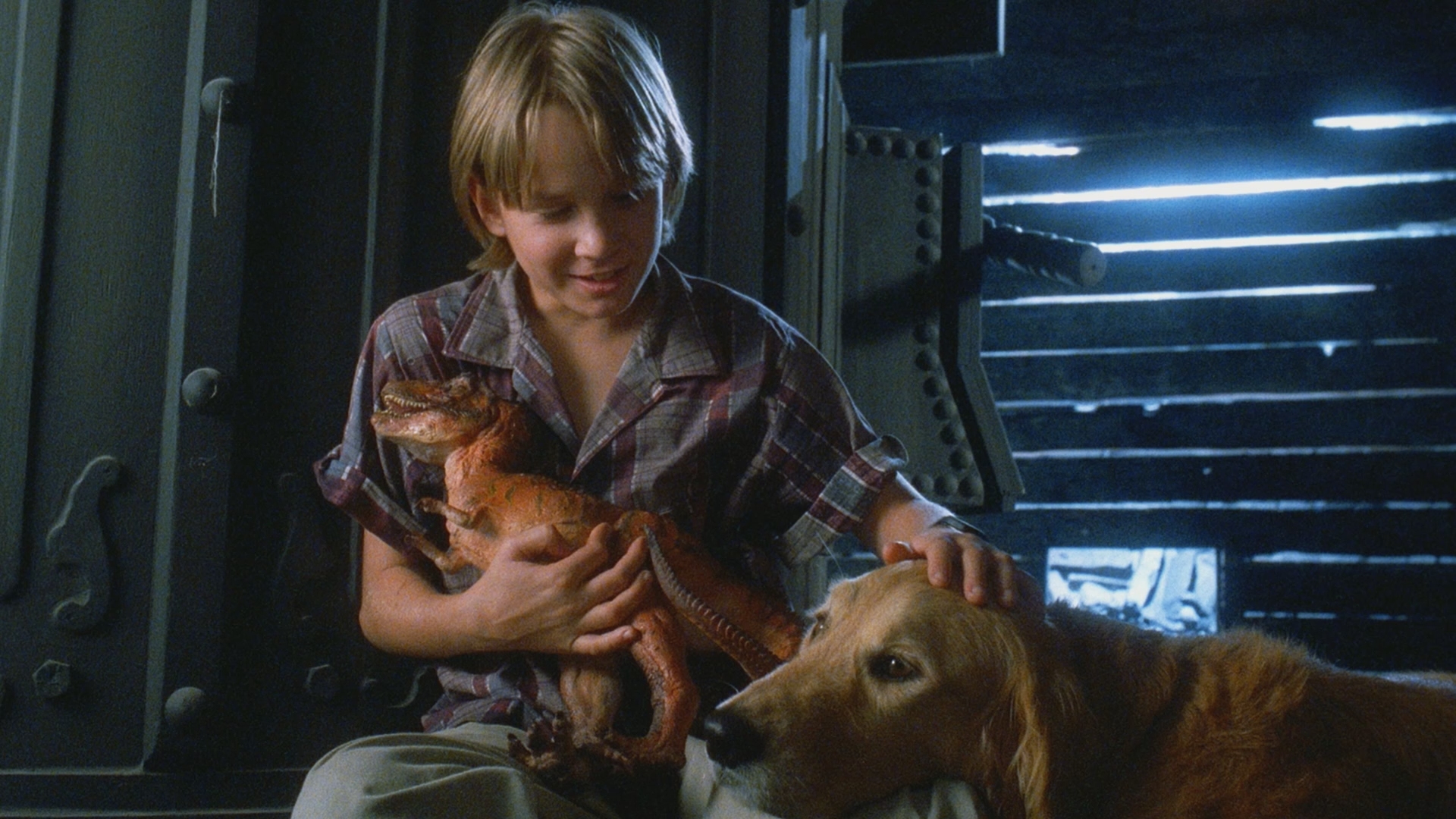 Debuting on Blu-ray, Prehysteria comes with a generally clean presentation. A few specks and marks on the print leave it feeling vintage without becoming a distraction.

The key issue for this disc is compression. Grain is poorly resolved, as if an old MPEG-2 transfer. From the outset, blocking is visible and loud. Watch as O’Brien first plays guitar in his bedroom; the brown walls and shadows look similar to a DVD given the chunky appearance.

When not being suffocated by digital artifacts, there’s enough resolution to surprise. Close-ups resolve facial definition and the few early scenes in the jungle tackle thick plant life with great sharpness. The dinosaur puppets look fantastic, including paint details unseen on the ancient VHS. At 1080p, the wires moving the puppets show up too, certainly an unwanted effect, but a sign of how clear this transfer is.

Appropriately, color stands out too. High saturation gives added zest to the dinosaurs and their careful color schemes. Natural flesh tones and bright primaries add to the fantasy feel. Little (if anything) is done in terms of tweaking color digitally.

Note that a few composite shots were done on tape and they look as such. That’s no fault of the disc.

If the look of MPEG-2 artifacts brings you back, so too will the Dolby Digital offering. It’s 5.1, although the surrounds barely become involved. A bit of jungle ambiance and bright music swell to fill that rear soundstage, but this is otherwise front-loaded.

A few effects slip into the stereos, including a radio that falls into the front right when in the basement. Generally, the center channel takes up the work, cleanly so, with a few dialog lines running slightly coarse. Some LFE touches include a clap of thunder and a gunshot, mild in their impact.

Charles Band and Austin O’Brien come together to chat Prehysteria via a commentary track. They have fun with this one, even if they barely recall much of the movie. That’s followed by the 21-minute Videozone, which as introduced by Band, is a video magazine. In reality, it’s a well done making-of that looks at the production years before they were the norm, followed by trailers and instructional drawing/sculpting segments.

It’s cheap but for the target audience, Prehysteria is a simple, comfortable story about having dinosaurs as pets and the mayhem that ensues.

The 15 unaltered images below represent the Blu-ray. For an additional 21 Prehysteria screenshots, early access to all screens (plus the 17,000+ already in our library), 50+ exclusive 4K UHD reviews, and more, support us on Patreon.