In a movie universe where the entire planet is under fire from a great evil, it’s hard to shrink down to Ant-Man and the Wasp. It’s fine, flush with quippy humor, action, visual effects, and energetic storytelling, but it’s also redundant. As the 20th film in the Marvel franchise, Ant-Man and the Wasp feels like an unnecessary extension. Consequential storytelling occurs only after the end credits. Seems like Ant-Man and the Wasp, as a whole, is ready made for a credit cookie at the end of any other Marvel flick.

Read our full Ant-Man and the Wasp review for more.

With a 2K finish, Ant-Man and the Wasp isn’t a visually striking movie in terms of detail. On UHD, there’s a mild softness representative of an upscaled source. Texture still lives in the images. The suits look wonderful, and the various computers powering the quantum machines show exceptional definition. Some facial detail sprouts, but not through consistent means.

Luckily, there’s clarity galore. The digital source produces no noise. None. Nothing in the shadows, nothing in the background, nada. The glass window effect is here in full.

That lets a typically mild HDR pass through unimpeded. As it turns out, Ant-Man and the Wasp is saving the best stuff for last. Into the quantum realm, the bevy of colors swirl in a beautiful array with super dense contrast glistening off the diamond-like effects. The level of dimension and brightness is special. Elsewhere, this is a relatively dim presentation. Color favors a dry orange or gray, with nice flesh tones surviving the flattened look.

Black accounts for a lot though. Evangeline Lily’s pure black hair is a great HDR test. Even when among dark interiors, her hair still stands out, no crush to note. What the HDR pass lacks in pure dazzle, it quickly makes up for in clarity. This careful pass keeps detail flowing, even in areas where a lesser disc might lose out. 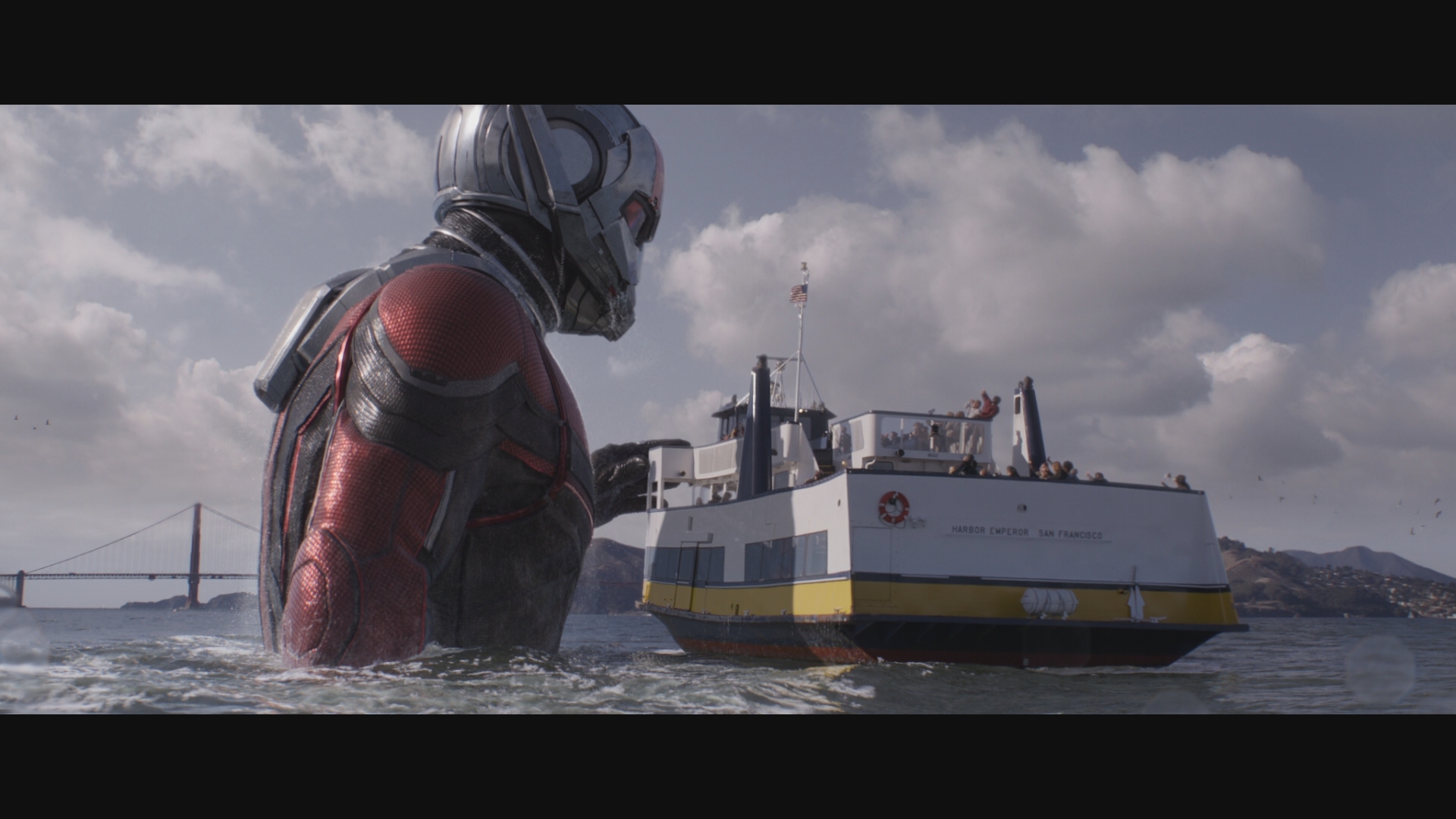 While lacking zest in colorful terms, the Ant-Man and the Wasp Blu-ray does substantial work in keeping things clear. Clean compression avoids blocking or noise of any kind. A slight bit of banding in a late underwater scene is easily forgiven.

Menial sharpness doesn’t call up significant detail, but there’s enough texture to earn a pass. Depth helps, with excellent black levels all around. Contrast peaks in the quantum realm, receding for the rest of the movie as an overcast sets in.

Disney discs suffered from prior concern over restricted dynamic range in their Atmos mixes. That’s not an issue here. Ant-Man and the Wasp’s output concentrates low-end power, whether that be the quantum machines, car engines, or sizing effects. Each thud is rousing, loud, tight, and notable. When a Pez dispenser slams into the ground in slow motion, it’s the loudest Pez in cinema history. Or, even world history probably.

Elegant surround use travels alongside any action sequence. Listen, for instance, as bullets rip through a chandelier in the first fight with Ghost. Not only do bullets sweep the soundstage, the small crystals chime, both from the air and impact in each channel. A wildly fun car chase pans vehicles front to rear. All manner of bullets and crashes decorate the scene further. This is great, grand popcorn mixing.

Director Peyton Reed delivers a solo commentary, and later on the disc, continues his chat over two short deleted scenes. The included gag reel only runs four minutes, but delivers laughs, particularly a section with Stan Lee’s cameo. Finally, there’s a four-part making of that runs 22-minutes. While on-set footage is extensive, the rest of the material is dull and routine.

Ant-Man and the Wasp

While enjoyable when separated from the greater Marvel saga, Ant-Man and the Wasp feels all too routine in the context of this movie-verse.

The 15 unaltered images below represent the Blu-ray. For an additional 33 Ant-Man and the Wasp screenshots, early access to all screens (plus the 17,000+ already in our library), 50+ exclusive 4K UHD reviews, and more, support us on Patreon.